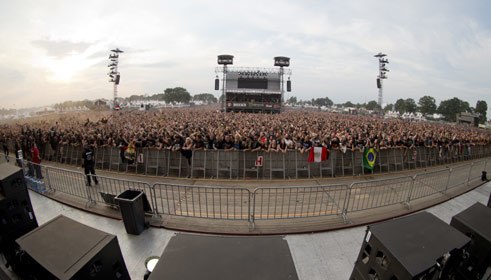 The first time there were 800 visitors. Now the Wacken Open Air is the biggest metal festival in the world. It has gone from being a niche gathering to a mass event that sets standards in many respects. Notes on an anniversary.

It took less than seven hours and the 2015 heavy metal festival in Wacken was sold out. In July every year hard and heavy metal disciples from all over the world follow the rutting call of a burning bull’s skull to the provincial backwater of Wacken Schleswig-Holstein. On the idyllic pastures where otherwise cows peacefully graze come fun warriors and long, shaggy hair-shakers in a rain of beer and sometimes fierce mudslinging. Seventy-five thousand like-minded visitors make the Wacken Open Air (W:O:A) the world’s biggest hard rock and metal festival. And in summer 2014 its founding fathers, Thomas Jensen and Holger Hübner, could celebrate its 25th anniversary.

Start in a gravel pit

The legend began in 1989 when Jensen and Hübner were able to persuade the local motor cycle club to mount a small festival in the gravel pit of Wacken, a community of 2,000 souls. Regional bands made up the programme; the ticket sales were handled by the family. Barely 800 metal fans celebrated the first W:O:A in the summer of 1990; and hardly anyone then imagined that this would one day become the Woodstock of the metal scene. In the following years more and more fans came together on the Holstein field. The initially very suspicious residents of the village discovered that, though the metal fans looked menacing, they were the cause of neither riots nor drug excesses. But with the growing dimensions of the festival its logistics and security requirements have become more complex. Like many other independently organized events, the W:O:A too has had to eke out its budget time and again to avoid bankruptcy. The travails of the beginning have become, like the local fire department band’s kick-off of the festival, part of the metal myth.

Today, when Deep Purple strikes up its old, well-known guitar riff Smoke On The Water, the eternal shock rocker Alice Cooper announces that he feels absolutely at home in Wacken and the internationally acclaimed noise experts of Motörhead and Megadeth stand as a matter-of-course on the Wacken agenda, the festival seems far away from its turbulent early years. In 2014 the feature pages of even the national newspapers rendered elaborate homage to the metal cult. And German rapper Jan Delay dedicated a hymn to the festival, cruising through the black-robbed pack in his respectful-ironic video in a white designer suit.
Wacken Open Air (trailer)

As early as 2006 the Korean film-maker Cho Sung-Hyung already cast a fascinated gaze on the festival in her documentary film Full Metal Village, and the film Wacken 3D (2014) by Norbert Heitker sets the gathering a visually powerful monument on the 25th anniversary of its birth. The images show that there is no escape for the villagers when the invasion of the dark but good-humoured horde of fans falls over them. With Holsteinian placidity, the residents acquiesce in the noisy goings-on or are soon included in them. As, for instance, the farmer Uwe Trede, in whose field the main stage stands. Or the Wacken Firefighters, the band of the volunteer fire department, which provides the idiosyncratic musical tattoo. Some say “cult status”. No one any longer fears the dark horde, which, like Goethe’s Mephisto, “always wills the bad, and always works the good”. A largely peaceful mega get-together minus any excesses.

The whole thing is reminiscent of a crazed hobbit horde in Sauron costume. Head-banging and Viking battles are part of the ritual. The festival beer garden, now long standard amongst other open-air events, was first “invented” in Wacken. Wacken founder Thomas Jensen likes to speak of the “fifth season” for metalheads and points to event standards that have been set here. For example, the festival “metal train”, which travels from Zurich straight through Germany to the Holstein province. At the Soccer Cup international visiting teams kick the ball for a (sponsor) cup; at the metal market mile, textile and accessories producers find their target groups.

The musical focus of the W:O:A is naturally on hard rock, metal and their sub-varieties. But there has long been a special stage for medieval (metal) folklore, and other stylistic split-offs are also to remain under the capacious Wacken umbrella. The original scene can be found today in front of the true metal stage, while the younger generation practice childlike head-shaking and head-banging and in the play area. The W:O:A no longer needs elaborate advertising and marketing campaigns. After 25 years, Wacken too has arrived in the mainstream, where festivals are invariably quickly sold out in advance.

There remain the allegations of sell-out, with which subcultures have always had to grapple. Over the years the balance between underground and sell-out has been difficult to maintain. A metalhead cookbook by TV cook Tim Mälzer, the festival’s own brand of beer and cruises under the metal flag have given cause for distaste amongst purists. So far, however, the conservative metal culture and commercial exploitation have consorted quite well together. For the festival organizer Jensen, this is not a contradiction. He invests festival revenues in the local infrastructure and pays young bands fees above the average. Finally, the Metal Battle Contest promotes up and coming bands. For the winner, an appearance at Wacken amidst the metal greats beckons, and so perhaps also the big career leap.

Ralf Niemcyzk writes since the eighties about music, pop culture, sports and urban development. Since 2011, he works as an editor for “Rolling Stone” Magazine (text in collaboration with Julia Harz).