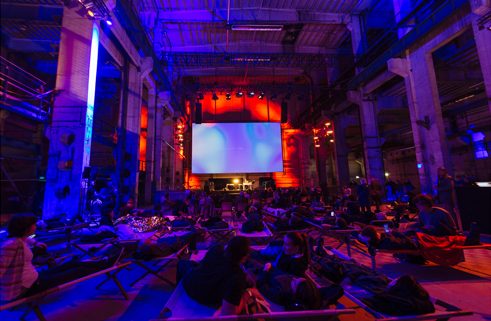 The Berlin festival Maerzmusik changes its name to “Festival for Time Issues”. It is about the extension of the existing concept of a contemporary music festival. Many questions were therefore raised at Maerzmusik 2015, but by no means were all answered. And the central theme of “time” induced some participants to let their thoughts wander creatively and philosophically.

Berno Odo Polzer, the new head of the Berlin Maerzmusik (i.e. Marchmusic), is looking for new concert formats. The opening concert Liquid Room, for example is called “a kind of live streaming” in the festival program. The English language fascinates the music curator, who was born in Bregenz in 1974 and previously headed the festival Wien modern. And doesn’t a live stream seem more up-to-date than a traditional concert? Maerzmusik was already multimedial and international under Polzer’s predecessor, Matthias Osterwold.

Naturally, a new boss wants to do everything differently. The previous “Festival for Current Music” has been transformed into a “Festival for Time Issues”, whereby “time” is understood not least as a category of the political. Thus Polzer supplemented the concerts with a nine-day conference entitled “Thinking Together – The Politics of Time”. Almost all the lectures and discourses were held in English, a feat that was also demanded of the German participants Aleida Assmann, Sven Lüttiken, Julian Pörksen, Helga de la Motte-Haber, Gregor Herzfeld and Lutz Henke. Polzer based this format on his experiences with the Open Space of the Darmstadt Summer Courses; as a conference language, German apparently seemed to him in this connection to be insufficiently international.

The discussions of the conferencs concerned not least liberation from the time regime of neo-liberalism. Rolando Vázquez, sociologist at the University College Roosevelt in Middelburg, Netherlands, called for a decolonization of time and the author and dramatic adviser Julian Pörksen called for a generous wasting of time. The latter idea left its stamp on the programme design of Maerzmusik, which aimed at suspending the sense of time. To this end, the opening concert Liquid Room was dilated to four hours and the concluding concert The Long Now, held at Kraftwerk in Berlin, to thirty. Some listeners were content with the infinitely slowly progressing sounds or with individual sustained tones accompanying endless film projections, while others felt the constant background noise was a waste of time.

Unless we already regard the temporal dilation of concerts as a political act, the much-vaunted political dimension of this year’s Maerzmusik was apparent in really only two events. In their music theatre projects Kredit (i.e. Credit) and Recht (i.e. Law), the experimental film-maker Daniel Kötter and the composer Hannes Seidl explored two invisible principles that shape the “economy of action”. While in Kredit the camera follows Frankfurt bankers at work, Recht stages a meeting of legal scholar on a Mosel island where they draft a new legal system in English. Strikingly, in Kredit the cinematic soundtrack is deleted and recreated live. We marvel at the dubber and foley artist who make up for the lack of sound, but still don’t understand the mysteries of banking. In Recht the alienation effect is exactly the reverse, in that the soundtrack is doubled with live music on the stage. If here too the substance of the statement remains nebulous, the original form gives food for thought.

The most rewarding part of the festival was the series of works of the Greek-born composer Georges Aperghis, who has lived in Paris since 1965 and made a personal appearance on the occasion of his 70th birthday. His Récitations for Solo Voice (1977/78), performed by the singer Donatienne Michel-Dansac, made for a spectacular start. After very fast sprechgesang, with alternating sustained tones and repeated notes, the second piece was a combination of speech and calls. Finally, by holding and compressing her breath, the singer literally took her own breath away. She ended with a great sigh and thereby switched from the previously used everyday French to Spanish. Instead of the forty minutes announced by the playbill, the performance lasted sixty minutes. At a festival devoted to “time issues”, one might have expected more precise information about the duration of works.

The individual and the whole

In 2013, Aperghis wrote his Situations for 23 Soloists for the musicians of the Klangforum Wien. It consists in series of individual musical portraits of the performers and their characters. Thus Aperghis has the Russian accordion player Krassimir Sterev recite a poem by Pushkin. The pianist Florian Müller, whom the composer thought particularly taciturn, read a Canetti text about silence in German. Aperghis defines the orchestral interplay as a social question: How can we live together without sacrificing our individuality? As a response to this question, Situations presented a piece alternating between soloists and tutti, performance, speaking and singing, full of fascinating leaps and surprises.

Albrecht Dümling lives and works as a music scientist and music critic in Berlin.