As news of Che Guevara’s death spread around the world in 1967, an independent label declared a cultural revolution in Bavaria. 2017 marks the 50th birthday of the Trikont record company, still a subversive thorn in the establishment’s side today.

For the last 50 years, the Trikont independent record label has been known for its heady mixture of unconventional music and anti-authoritarian attitudes. Originally founded in 1967 in Munich as a book publisher, Trikont’s claim to be “probably the world’s oldest independent label” has the ring of truth. The name is derived from the 1966 Solidarity Conference of the Peoples of Africa, Asia and Latin America, also known as the Tricontinental Conference, held in Cuba at which delegates from the three regions called for an end to Western hegemony. Around the same time in Southern Germany, Trikont was building a home for left-wing, alternative musicians as the 1968 movement gathered momentum.

The first of the 492 releases to date was entitled Wir befreien uns selbst (We are liberating ourselves) by the Arbeitersache München band. The record features twelve songs of rebellious worker’s folklore, titles like Akkord ist Mord (Piecework is Murder) and Bei BMW wird gestreikt (They’re striking at BMW). Trikont would later release the legendary Keine Macht Für Niemand (No Power for No One) from Ton Steine Scherben, still a must-have for any vinyl lover’s punk-inspired record collection today. Some of the books published by Trikont included the Mao bible, selected writings from Vietnamese communist Ho Chi Minh, and the Bolivian Diary of Che Guevara, executed in Bolivia the same year the publishing house was born. In 1980, the company dissolved the publishing wing to reform as independent record label now called “Trikont – Unsere Stimme – Our own Voice”. The record company doesn’t necessarily see itself on an ideological mission today, but it remains critical, rebellious, subversive, and yet somehow essentially Bavarian.

Trikont boss Achim Bergmann, himself a Bavarian icon, has been with the label for 50 years. In 1990, he and his wife Eva Mair-Holmes took the helm. Bergmann has no qualms about voicing his opinions and joining the political fray. At the Frankfurt Book Fair in autumn 2017, the 70-yer-old music producer’s loud interjections to protest far-right rhetoric at an event held by the right-leaning “Junge Freiheit” weekly paper earned him a punch in the face, leaving Bergmann with a bloody lip. Eva Mair-Holmes responded by denouncing the far-right’s emerging sense of self-confidence on Facebook. Her post went viral, kicking off heated debate. The altercation didn’t discourage Bergmann one bit. Like his label, he may be getting older, but he is not about to go gently into that good night. [Editorial note: Achim Bergmann died on 1 March 2018.]

Keeping up with Spotify

Today, Trikont has a broader musical base than ever before and works with musicians from a wide range of genres and styles. Artists include rapper Textor, the Express Brass Band, and Munich-based Japanese Coconami, known for their polyphonic vocals underscored by ukulele and recorder. The Bavarian dialect has also always felt at home with Trikont. Along with singer-songwriter Hans Söllner, the label now distributes new folk music by artists like Kofelgschroa. In the 1990s, Schwoißfuaß’s ‘dialect rock’ caused a sensation with its provocative Bavarian lyrics. Trikont also has a sense of humour, as evidenced by the Café Unterzucker band, author and musician Eric Pfeil, and, until a few years ago, musician and actor Rocko Schamoni. If there is anything that unites Trikot artists, it would have to be a drive to be different and go against the grain.

While the label has never focused on commercial success, you don’t get to be 50 on a diet of bread and Red alone, certainly not in the age of iTunes and Spotify. Trikont keeps up with the latest technology, releasing MP3 downloads and vinyl to keep both the smartphone crowd and retro fans in the re-emerging record market happy. It also relies on the art of the compilation. Series like Stimmen Bayerns (Voices of Bavaria) and La Paloma reveal the label’s flexibility. Trikont appealed to a wider public with its recent Russendisko (Russian Disco) series. Based on author Valdimir Kaminer’s best seller and film of the same name, Trikont published three compilation albums of Russian and Ukrainian music to accompany his European club tour. 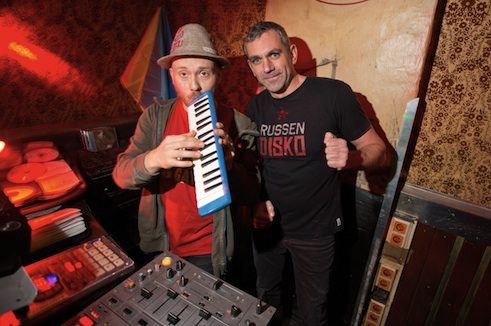