An Introduction
Jazz from Germany

German jazz is multifaceted. Hardly any other national jazz scene in Europe has such a range of styles, traditions and techniques. From blues, boogie and Dixieland via swing, bebop and cool jazz to jazz rock, free jazz and various mixed forms of jazz with new music, world music, hip-hop, ambient, folklore and popular music, almost all varieties of improvised music enjoy a broad basis.

Jazz is often - and above all – played live, by young university graduates as well as by old hands in the trade. It has a vast and experienced audience, a chequered and eventful history that due to the federal political system still exhibits numerous regional peculiarities and an artistic dynamic that, in the years since the fall of the Wall, has been increasingly recognised and appreciated also on the international scene. Jazz from and in Germany has meanwhile acquired an identity of its own, resulting from history as well as from the vocational opportunities, the concert and club landscape and the structural singularities of the political regional division.

Germany is a federal state that was divided into two political systems for over four decades. In the West, after the emancipation from US-American role models, at the latest since the end of the 1960s, the development was determined by the balance between the questioning of tradition and by conservatism. After 1970 it may have seemed that - due to the dominant influence of the Wuppertal scene with musicians such as the saxophonist Peter Brötzmann - free jazz prevailed over other styles. On the whole, however, West-German jazz was characterised by a broad spectrum of forms of expression, ranging from the experiments of Albert Mangelsdorff to the jazz rock of Klaus Doldinger.

The musicians of the GDR followed their own path in the field of tension between state control and artistic identity. Some, such as the pianist Ulrich Gumpert, developed alongside free jazz a national-style cocktail of folksong, worker’s song and Saxon baroque, which however found few imitators after the fall of the Wall. In contrast, already before 1989, in spite of political frontiers there were numerous fertile contacts between the jazz scenes of the two German states, for instance at festivals and tours which facilitated the merging of the scenes after reunification.

Meeting of generations and styles, of east and west: Günter 'Baby' Sommer and Till Brönner at the 34.Leipziger Jazztage in 2010. Source: Youtube

The quality of German jazz is ensured by a dense, nation-wide network of institutions, activities and supportive measures. Here radio plays an important role. The public broadcaster ARD is not only able to showcase specific centres of jazz via its regional stations, but can also promote and encourage the music scene by means of live recordings and the support of festivals and clubs and, moreover, by providing comprehensive archiving. 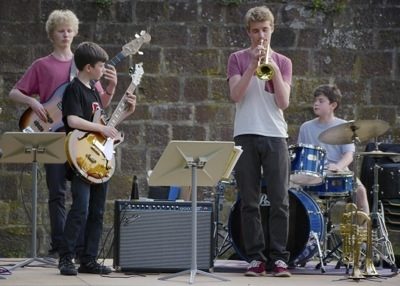 Session with young finalists of the competition 'Jugend jazzt' 2013 | Photo: Ralf Dombrowski Furthermore, a densely-woven carpet of jazz festivals guarantees an exchange between the national jazz scene and international artists. Here the focus ranges from the Dixieland Festival in Dresden to the Total Music Meeting Berlin that is dedicated to free improvisation and the Moers Festival that highlights new tendencies in rock, world music and electronics. The vocational courses on offer in Germany for jazz musicians are also multifarious and differentiated. At present 18 music academies and conservatories offer courses in jazz throughout all the federal states. Also at a local level and in schools much is being done to introduce budding musicians to jazz at an early age.

Impulses from all over the world

Jazz in Germany is influenced not least by musicians who come from other countries and who, with their musical experiences, give new impulses to musicians from Flensburg to Garmisch. The breadth of variety and potential boundlessness of jazz as well as the concomitant openness of players, organisers, media and audience are factors that make Germany attractive as a location for musicians from all over the world.

Aki Takase, Vladyslav Sendecki, David Friedman, John Hollenbeck and Cymin Samawatie are only some of the many luminaries who, with their projects and bands, are giving international impulses to the music scene here in Germany.

Each jazz location has its stylistic speciality. Frankfurt was moulded by the avant-garde school around Albert Mangelsdorff and Heinz Sauer. Hamburg is regarded as the capital of modern mainstream, Hanover was once the stronghold of acid jazz. Weilheim in Bavaria is renowned for its synthesis of post-rock and jazz avant-garde, Wuppertal is a synonym for free jazz. Berlin and Cologne stand for an abundance of diverse jazz styles, yet all these categorisations are no more than starting points for an initial orientation.

In recent years, primarily in Berlin, an international scene has established itself that with its sub-cultural charm and cosmopolitan independence is setting a benchmark beyond the borders of style, genre and generation and need not shun international comparison with New York and London. Hence “Jazz – made in Germany” is more than just a trademark. It is – as it always has been – an option, a chance and a perspective.

Networking of the scene

Given highly competitive funding pools and coveted but rare media publicity, advertising, self-organization and cultural-political action have become more and more essential in the German jazz scene. Since 2006, the industry has been meeting each year at the music fair jazzahead! in Bremen. In the National Conference on Jazz (Bundeskonferenz Jazz / BK Jazz), which has existed since 2002, representatives of record companies, festivals, clubs, music initiatives have joined together to present their common interests stoutly before political and cultural institutions. Even the long inactive Union of German Jazz Musicians (Union Deutscher Jazzmusiker / UDJ) has been successfully revived and has since gained in importance as an interest group representing artists. These are all signs that the scene has rejuvenated, re-oriented and reorganized itself.

Central, however, even in a polystylistic, multi-cultural and migration-open time, remains the artistic profile with which the jazz musician presents himself to the rest of the world. Idiosyncrasies are in demand and in some genres unusual bands and artists have over the years been able to make a name for themselves. The piano trio, for instance, has experienced a rapid development, not only internationally but also in Germany. Groups such as the Tingvall Trio from Hamburg, Michael Wollnys ‘(em)’ from Berlin and the Cologne Pablo Held Trio have managed both to gain an audience and to explore new territory with communicative, structural and conceptual experiments. 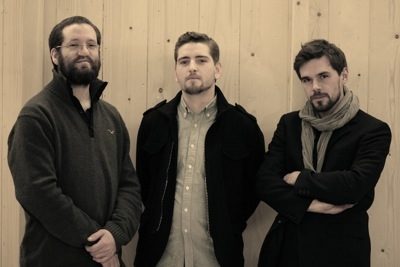 The Pablo Held Trio | Photo: Ralf Dombrowski Also in the lead are large ensembles which, like the Andromeda Mega Express Orchestra, play with deconstructive models; swing, despite complex sound layering, like Malte Schiller’s Red Balloon; or know how to unfold shimmering tonal riches like the Christian Elsässer Orchestra. In addition, a new generation of composers has grown up, who, like Charlotte Greve, Benedikt Jahnel, Niels Klein, Angelika Niescier, Matthias Schriefl and Henning Sieverts, have both individualized and internationalized the creative standard. So the cards for jazz in Germany are well-mixed. And in the match for the attention of a global scene there are a few jokers to be dealt.

Wolf Kampmann is a free-lance music journalist who writes for numerous magazines, daily newspapers and TV and radio broadcasters. He is the editor and author of the Rowohlt Rock-Lexikon and Reclam’s Jazzlexikon, and is also a lecturer on the history of jazz at Berlin’s Jazzinstitut.