Krautrock and Indian vibes from the Black Forest

Balkan pop is big in Germany, brass bands are popping up all over the country and even rappers are sampling brass music these days: over the past ten years, “global pop” has become an established musical genre in Germany. 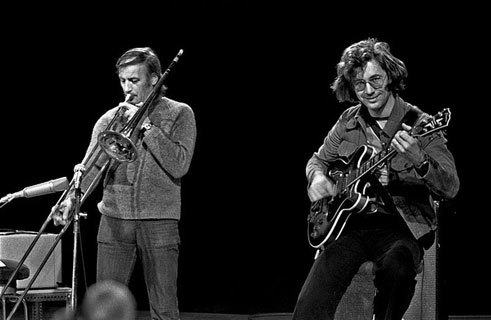 It started with a joke: at least that’s what Mathar was supposed to be. Guitarist Volker Kriegel and his quartet from Frankfurt were actually jazzmen in the late 1960s. Nevertheless, there was simply no getting round the Beatles in that day and age. At the time George Harrison had pilgrimaged to India and taught himself how to play the sitar. Well, we can do that too, said the Frankfurt jazzmen. And that is how Mathar came about, arguably the very first German piece of “world music” – long before this term had even been coined to describe the genre.

Kriegel’s fellow jazzmen from Frankfurt, Albert Mangelsdorff, Heinz Sauer and Ralf Hübner, took the same trip to India in 1964. After their Asia tour, the Goethe-Institut had commissioned them to write two fusion pieces. But those compositions were downright conventional compared to Volker Kriegel and band’s innovative pop-heavy concept. Kriegel came up with the sitar intro and the catchy hookline in the piece Mathar, which they recorded in the Black Forest. “It was all meant a bit ironically, more like a musical joke really!” recalls Kriegel. Over 20 years later, disc jockeys rediscovered the piece. It was the mid-1980s, and the Indian-born head of Outcaste, an Asian underground label in London, came knocking at Kriegel’s door: he wanted to discuss remixes and the master tapes to Mathar. Kriegel comments: “Apparently there had to be some Central European schmucks to get young Indians in London back into their own music by such a fantastically roundabout route.”

Meantime, though, German bands like Embryo and Die Dissidenten were heading off to Morocco and India in search of novel rhythms and inspirations, and they brought instrumentalists back with them from their extended concert tours. What in the 1970s had still been known as “Krautrock with hippie flair” evolved in the 1980s into a separate genre altogether: world music. Die Dissidenten were acclaimed by Rolling Stone Magazine as “the Godfathers of World Beat”, and in 2008 their counterparts in the band Embryo were presented with the Ruth World Music Award for Lifetime Achievement. Now what about the present-day club scene?

Wild ecstasy to a Balkan beat 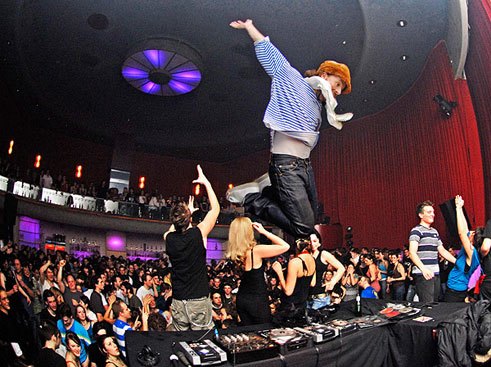 Shantel live, | © Michael Namberger / Essay Recordings Frankfurt-based disc jockeys Daniel Haaksman and Stefan Hantel alias Shantel had already felt it coming at the turn of the millennium: wild ecstasy would soon take the place of the dullness cultivated on German dance floors. Brass, they sensed, would suddenly be hip, and the tuba and accordion would be rousing the clubs. It would soon be perfectly natural to mix in rhythms from Angola, Brazil and Istanbul. As early as the 1990s, Haaksman and Hantel had already broken out in a new direction at the Frankfurt club Lissania Essay with hip hop from France along with rai from Algeria. Some years later, Vesna Petkovic, a Serb singer in the Sandy Lopicic Orkestar from the Austrian city of Graz, was to become the front-woman in Shantel’s newly-formed Bucovina Club Orkestar.

“It was more like I’d been kicked upstairs,” says Hantel in hindsight. Because suddenly everything happened so very fast: sold-out club nights and widely acclaimed shows at festivals from Glastonbury to Roskilde, along with appearances on TV broadcasts everywhere from The Netherlands to Turkey. Hantel provided the vital spark at just the right time and, over the past few years, has become one of the most active exponents of the Balkan pop genre that he co-founded. As a matter of fact, his brand of Balkan sounds more pop than all his precursors’, from Goran Bregovic to all the Romani bands like Fanfare Ciocarlia or Kocani Orkestar: his album Planet Paprika, for instance, liberally quotes from Hello Africa, the biggest hit by the Nigerian-Swedish musician Alban Nwapa alias Dr. Alban, released by Logic Records in Offenbach in 1990.

Sampling from traditional music, however, as Stefan Hantel  et al. are wont to do, doesn’t always go down well with Romani musicians, since popular artists like Hantel make money off their music, whereas they usually come away empty-handed. 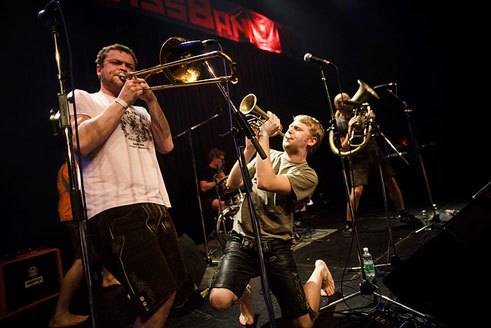 LaBrassBanda, | © ARGEkultur Bavarian brass music is likewise coming in unusual colours these days: what used to be Alpine folk music is taking on novel forms at big festivals and rousing young pop music crowds. At the Roskilde festival near Copenhagen, for instance, trumpeter Stefan Dettl’s LaBrassBanda formation from Lake Chiemsee gained lots of new fans. Disc jockey Sebastian Weiss alias Sepalot from the Munich hip hop crew Blumentopf has recently been delving into Bavarian brass music too and has even sampled it into his web album Beat Konducta: Bavaria with an unexpectedly funky twist. But he also served as executive producer for Ladi6, a hip-hop soul singer/songwriter of Samoan descent from New Zealand.

So it was really just a question of time before Germany would make an original contribution to the worldwide ghetto tech trend within global dance music. “Munich bass”, now constitutes the Bavarian variant of tropical beats from London. The music is loud, aggressive, extremely clubworthy – and stems from Schlachthofbronx, in other words the producer/DJ duo Jakob and Bene. The Süddeutsche Zeitung has simply dubbed this new hotchpotch “Welttanzmusik” (“world dance music”) because it mixes snippets in from every conceivable, or inconceivable, musical context.

The Munich-based label Outhere recently released a different sort of mixture: a CD entitled Welcome to the Madhouse by the Project BLNRB (Berlin-Nairobi). At the initiative of the Goethe-Institut and the Teichmann brothers, a house in Nairobi was converted for a few days into a creative production studio called “the Madhouse”. Rapper Lon Jon describes it thus: “At least 25 people were there all at once in the house, there were three recording studios and we kept shuttling back and forth between the rooms.” The beats on the CD stem from Jahcoozi – with singer Sasha Perreira – and the Berlin band Modeselektor, among others. Thus far, sums up Nigerian rapper Lon Jon after joint concerts in Cologne, Berlin and Nairobi: “We’ve got to know each other’s culture a whole lot better.”

In the mid-1990s, two radio stations were started up in Berlin and Cologne to serve as a medium for immigrant integration, for one thing, and, for another, to showcase the music of these ethnic communities, unlike the usual radio programmes. In 2008, Radio Multikulti’s programme broadcast from Berlin was discontinued and merged with the Westdeutscher Rundfunk’s (WDR) Funkhaus Europa programme in Cologne, which now has a VHF (very high frequency) in Berlin, too. Funkhaus Europa presents global pop acts at all the major festivals now and also organizes a concert series. What is more, the ARD network on which WDR broadcasts is involved in the annual International Dance and Folk Festival in Rudolstadt, Thuringia, which dates back to the days of East Germany and has now become Germany’s pre-eminent world music festival. So it’s become a small world after all here in Germany, too: global pop, a mixed bag of musical ingredients drawn from the four corners of the earth, is in the air and on the airwaves just about wherever you go.