Breakdancing in the mall

When the first big wave of hip hop hit Germany in the early 1980s, it suddenly didn't matter anymore that there were only three TV broadcasters, because Eisi Gulp was on ZDF doing his weekly breakdance show. 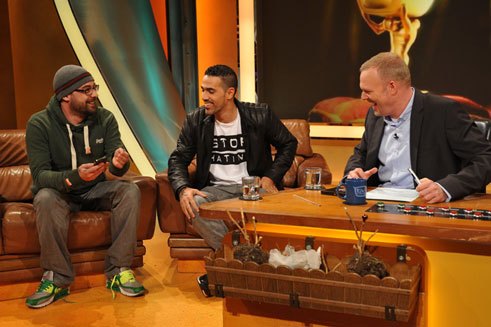 It didn’t matter anymore either that there were no role models from the immigrant community in German sports and the media, in arts and politics, or in everyday life among policemen, teachers, judges and social workers. Because with “Breakdance in der Fußgängerzone, das war gar nicht ohne” (“Breaking in the mall, and that wasn’t all” – a line from a song by Advanced Chemistry), young immigrants suddenly got some respect and recognition, even from mainstream German society. And the new role models were from their own neighbourhood: there was Ali in Kiel and Kofi in Heidelberg, Gio in Berlin and Kutlu in Cologne, Gerry in Frankfurt and David in Munich, Mike in Bremerhaven and so many more.

“We give a fuck what language”: early years of jam culture

The young, immigrant-driven hip hop scene in Germany grew into a network in the second half of the 1980s. They met up at jam sessions: self-organized parties, mostly in youth clubs, that drew hip hoppers from all over Germany and from neighbouring countries, too. The DJs stood in the centre, supplying the beats for the rappers on stage and the break-boys in a circle battling it out amid the crowd. The graffiti artists would be sitting there too with their blackbooks, showcasing their latest pieces and designs.

During the first few years, the rapping on stage was all in English. But other languages – German and the rappers’ various second and third mother tongues – gradually gained currency. As a matter of fact, ethnic youths were rapping in Turkish and Serbo-Croatian in Germany before their cohorts followed suit in Turkey and ex-Yugoslavia. So Turkish and Serbo-Croatian rap (and this goes for some other languages as well) are, in a sense, German inventions. As Linguist from Advanced Chemistry once pointed out, the only fully-fledged innovation to which the hip hop scene in Germany can lay claim was a colourful array of languages sharing the stage – and on an equal footing.

In those early years it didn’t matter where you were from, what kind of schooling you’d had or your parent’s social status: the only thing that counted was what you could do on stage as a rapper, DJ or beatboxer, what you had to show for yourself in breaking battle or outside on the graffiti wall. 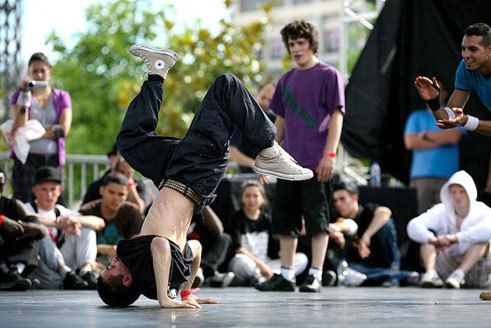 Breakdance, | Foto: Hippolyte
In the early 1990s, the first rap records in German came out. What with releases by the likes of Fresh Familee, Easy Business, Advanced Chemistry and Exponential Enjoyment, hip hop of an immigrant stamp had made its breakthrough on the market. However, it was ultimately die Fantastischen Vier, four middle-class youths from Stuttgart, who were to serve as the public face of hip hop for the next few years. The German-language crews that subsequently made it big, e.g. Fettes Brot, Freundeskreis, Absolute Beginner, Massive Töne et al., were all perceived as German bands, not so much on account of the band members, some of whom did indeed stem from the immigrant community, but on account of their image. Thanks to their appearance, the way the record companies packaged them for general consumption, their diction and the way they expressed themselves in interviews – on the whole they came across as educated, well-mannered middle-class boys.

Anything that didn’t fit into this standard mould, whether because it used Middle Eastern samples and instruments or lyrics that were not in German, was branded “Oriental hip hop” and placed on a separate shelf at record stores. Following the radical right-wing arson attacks of the mid-1990s, Oriental hip hop was always in demand whenever some town in Germany was holding a “festival of international understanding” or whatever they called such well-meaning events at the time. The crews were invited not because they made such good music or put on great live shows, but because they plainly had non-German roots: e.g. bands like Microphone Mafia from Cologne, the Sons of Gastarbeita from Witten, Islamic Force from Berlin or the Asiatic Warriors from Frankfurt am Main.

“You want a ghetto song on a ghetto beat”: Hip hop for the next millennium

From the get-go, the German version of hip hop had a “street cred” problem, both within the scene and, above all, in the eyes and ears of the general public. Though they were duly feted, the German crews were not regarded as bona fide rappers, because genuine rap had to come from the ghetto, from poverty and squalor, for it was the “news channel for black folk”. So what did a bunch of pale blond boys have to do with that? Even the ethnic crews seemed much too well-behaved, their ideas and desires much too politically correct, to compare with their American role models. 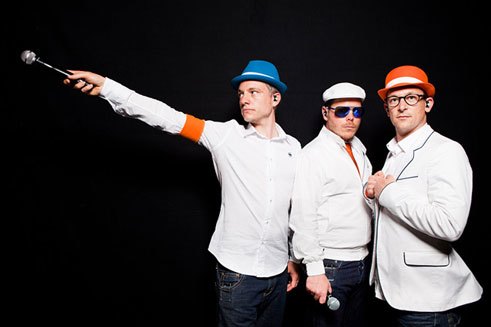 Fettes Brot, | Foto: Christopher Häring
In the years that followed, the focus gradually shifted from rap and its merits to the individuals doing it, the rappers. What counted was no longer what you could do but where you came from. To be esteemed a good, authentic rapper, you simply had to have grown up in the ghetto, with a history of drug-dealing and a “rap sheet” (i.e. a criminal record) by way of credentials. Rappers associated with the Aggro Berlin label capitalized on these clichés and garnered commercial success. Not only that, they were wooed by the media, invited to TV talk shows and written up in German weeklies like Die Zeit, Der Spiegel and Stern. When Sido took off his mask and started rapping about mama and son, when it emerged that Bushido had attended Tempelhofer Gymnasium, a good high school in Berlin, the spotlight shifted to guys like Kalusha, who rapped from inside a jail, Massiv and Haftbefehl (meaning “Arrest Warrant”).

This development represented a sea change for hip hop in Germany. The original source of hip hop’s sway, namely the basic idea of breaking down the barriers of “the ghetto” and bringing together people of different ethnic origin and from all walks of life, went by the board. What is more, the new version of rap, which was promoted by the record labels and ostensibly criticized but ultimately hyped by the media, was never perceived as an art form. Instead, it was misunderstood as an authentic utterance, as a reflection of the mindset and attitudes of immigrant youths. And it supplied countless quotes and a perfect soundtrack for debates about the poor showing of German teenage pupils in the PISA study (Programme for International Student Assessment) as well as honour killings, juvenile delinquency and other current social issues. The examples adduced as “evidence” of these societal trends had very little to do with hip hop in its original form.

“If I can free just one good soul”: hip hop beyond the ghetto

Sido the mask, B-Tight the Afro-American, Bushido the Arab, and Fler the German – all of them claimed to be speaking from personal experience, and all of them were stylized into purportedly authentic spokesmen. In contrast to their American role models, however, they never spoke for others, never sought to change the status quo in any way. Maybe that was the reason for their success, the fact that, in the final analysis, they did not challenge the existing balance of power in society. Instead they built their own little niche in which to gain success and make a killing for themselves. Their lyrics and postures could be discussed marvellously without ever having to address pressing social issues.

This superficial, sensationalistic approach to hip hop, which was hyped with cheap showmanship left, right and centre, left no room for quiet, contemplative releases by well-known rappers like Afrob from Stuttgart or D-Flame from Frankfurt, let alone productions by such unknown entities as Bektas from Berlin or Mr. L from Frankfurt, or a nationwide project like Kanak Attak.

When the new German gangsta rap bubble finally burst, hip hop was, once again, promptly pronounced dead. Commercial interest in this one-sided conception of rap was gone. Perhaps the time has now come for groups like Jaysus from Stuttgart (“ich les ein Buch über Physik und seh’ fantastisch gut aus” [“I’m reading a physics book and I’m fantastically good-looking”]) that sidestep all the clichés about a “real rapper’s” origins and identity. After all, hip hop is ultimately not about where you come from, but what you do.

Sascha Verlan
writes and directs features for ARD Radio on subjects like DJ culture, hip hop, poetry slams and youth culture. “Rap-Texte”, his anthology of rap lyrics, was published by Reclam-Verlag and his books “25 Jahre HipHop in Deutschland” (“25 Years of Hip Hop in Germany”) and “French Connection” by Hannibal-Verlag.