German pop music tends to be viewed abroad as second-rate. But after getting off to a shaky start in the 1950s, a rich and diverse music scene took shape within a mere 15 years, and its most illustrious exemplars were to gain world recognition. 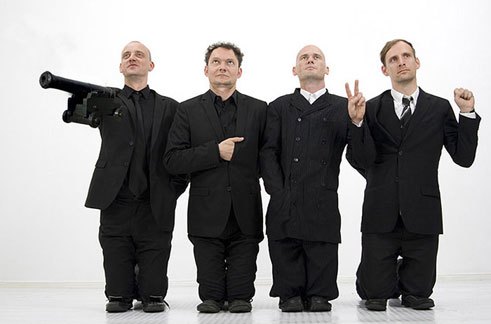 Sandow 2007 | Photo: Peter Gruchot In post-war Germany, the Nazi barbarities and the death or exodus of a great many distinguished composers and musicians had by and large severed the nation’s ties to the rich popular culture of the Weimar Republic. After 1945, pop music in West Germany, as part and parcel of a youth culture, aroused intense hostility in conservative mainstream society and its media. But in the mid-1950s, with the advent of American rock’n’roll movies and records by the likes of Bill Haley and Elvis Presley aired on US armed forces radio stations, new styles of music along with new behavioural codes began leaching into everyday German culture. Openly rebelling against the authoritarian moral majority of the post-war era, some of the nation’s youth yearned for an artistic alternative to the Schlager music cherished by their parents’ generation.

The early stars of German pop music, people like Peter Kraus, Ted Herold, Caterina Valente and Conny Froboess, could only partly satisfy that yearning. On the one hand, they modelled their style closely on American prototypes. On the other hand their music did not make a clear-cut break with German Schlager. Furthermore, the use of German lyrics restricted their audience to the German-speaking world. And that remained virtually unchanged in the 1960s, even though some of the newly-emerging beat bands did opt for English lyrics in a bid to make the international grade. As it turned out, however, bands like the Rattles from Hamburg or the Lords from Berlin did not compare favourably, which is why their exposure remained limited too.

Mama Düül and their sauerkraut band: krautrock is born

More autonomous forms of expression did not arise until the advent of more experimental varieties of rock music. Beginning in 1968, Amon Düül I, a band born of a Munich artists’ commune, and its spinoff Amon Düül II enriched the musical idiom of the age by adding sound collages und choir music, whilst the Berlin-based groups Agitation Free and Ash Ra Tempel were experimenting with open-ended song formats and electronic sound. The latter eventually became a key stylistic ingredient of a motley musical current that soon attracted notice in Great Britain as well, where it was generically dubbed “krautrock”.

Besides Berlin, where a hub of the electronic avant-garde formed around Tangerine Dream, Cluster and Klaus Schulze et al., the Rhineland in particular became a nucleus of progressive German pop music. In Cologne, the Can quintet fronted by Karlheinz Stockhausen’s pupils Holger Czukay and Irmin Schmidt freed rock music from the constraints of the conventional song structure and caused an international sensation with rhythmized collective improvisation. Even more influential were Kraftwerk from Düsseldorf, arguably the most famous German band of all. Although their early music resembled krautrock freed of its structural shackles, under the classically-trained Ralf Hütter and Florian Schneider-Esleben the group forged a revolutionary composite of synthesizer melodies, “robot-voiced” lyrics, and sequencer beats.

With their austere visual concept and the provocative way they played on hot-button icons of the history of German technology, as in the album titles Autobahn and Radio-Activity, Kraftwerk were perceived abroad as the “Teutonic” band par excellence – an image the band capitalized on quite successfully: in 1982, the English-language version of their single The Model hit the top of the British charts. Less successful but no less seminal were Duo Neu!, comprising former Kraftwerk members Michael Rother and Klaus Dinger, whose repetitively grooving pieces, using primitive remix technologies, were to provide vital impetus for subsequent generations of musicmakers. These three bands, plus Tangerine Dream and Faust (experimental rockers from Lower Saxony), probably contributed most to improving the image of German pop music abroad.

Apart from these lodestars, a host of other more or less original bands helped fuel the krautrock legend: Eloy and Jane from Hannover, Hoelderlin from Wuppertal, Ihre Kinder from Nuremberg, Kraan from Ulm, Frumpy and Novalis from Hamburg, Popol Vuh and Embryo from Munich, King Pin Meh from Mannheim, Wallenstein from Mönchengladbach, Percewood’s Onagram from Bremen, Grobschnitt from Hagen and the German-Swiss-Belgian ensemble Brainticket were the crest of a wave of krautrock whose sonar conceptions spread even into the deepest backwaters of provincial Germany. Most of these bands sang in English and, like the German beat combos ten years before, worked off international role models, albeit sometimes taking such an eccentric angle that some of them in turn became sources of inspiration to others.

Scions of the Scherben: Udo, Rio and the upshot

Alongside krautrock, a bona fide German rock music emerged, in which an attempt was made for the first time to work the everyday language of youth culture into song lyrics. In 1972 Udo Lindenberg, ex-drummer for the jazz rock combo Passport, began putting out LPs – and with mounting success – on which he welded authentic street slang with political issues and crude romanticism. The Ton Steine Scherben collective (“the Scherben” for short, meaning the “Shards”) took a similar approach under singer and lyricist Rio Reiser in Berlin, but got less airtime on the radio owing to their decidedly left-wing outlook, and so could not reach as wide an audience as Udo Lindenberg did.

Lindenberg, the Scherben, and Peter Maffay, who kept closer to Schlager music, provided proof positive that German lyrics were viable in pop music – and with far-reaching consequences. In 1977, for instance, the British punk rhetoric of class warfare began spreading like wildfire through West Germany. And for the first time in adapting a new musical style, most of the German bands expressed themselves in their own language, which dispelled any suspicion of their being copycats. At first, Düsseldorf was, once again, a hub of the movement. Influential bands like KFC, Male, ZK and Mittagspause established themselves in and around a bohemian bar called Ratinger Hof. This is where the Fehlfarben started out – and eventually became the single most important German post-punk band. Their single Ein Jahr (Es geht voran) provided a soundtrack, as it were, for the whole “no future” generation. Meanwhile, a parallel scene, that of the self-styled Geniale Dilletanten (“Brilliant Dilletantes” [sic] – note the purposely misspelled moniker), was evolving over in West Berlin, whose leading lights included Einstürzende Neubauten, Die Tödliche Doris, Gudrun Gut, and Frieder Butzmann. Their subversive concert performances deliberately crossed the line into the realms of visual communication and the fine arts.

In the late 1970s, pop music from Germany was not yet a mass phenomenon – apart from blockbuster bands like the Scorpions, an internationally successful heavy metal band from Hannover. Unlike the flourishing disco pop produced by Frank Farian (Boney M., Eruption) and Giorgio Moroder (Donna Summer, Amanda Lear), sales of Krautrock kept within reasonable bounds.

All that was changed in the early 1980s by the Neue Deutsche Welle (New German Wave), a phenomenon that catapulted domestic pop artists into the German hit parade hitherto dominated by the international mainstream and German Schlager. But others had paved the way for bands and artists like Trio, Nena, Hubert Kah, Fräulein Menke, Joachim Witt and Markus: the gay militancy of D.A.F. (Deutsch-Amerikanische Freundschaft), the dada pop of Der Plan, the feminist punk of Nina Hagen, the Berlin wave of Ideal and Neonbabies, the surreal wordplay of Foyer Des Arts and others provided much of the impetus for New German Wave. The big music companies brought about the new genre’s downfall themselves by signing on a host of copycats, which rapidly saturated the market.

For the rest, the 1980s was an era of diversification. Marius Müller-Westernhagen from Düsseldorf and Herbert Grönemeyer from Bochum were two singers of a regional stamp who established themselves as successors to Udo Lindenberg and rose to become national rock stars who could fill whole stadiums. In their wake, Wolf Maahn, Klaus Lage, Ina Deter, Ulla Meinecke and Heinz-Rudolf Kunze made it into the German rock hit parade. Rock music in regional and local dialects likewise caught on in the 1980s: BAP and Black Fööss from Cologne, the Rodgau Monotones from Hessen and the Spider Murphy Gang from Munich sang in dialect and rose to the upper rungs of the German charts. Moreover, English-language synthpop bands like Alphaville or Propaganda succeeded in positioning themselves in the international market. By far the most successful of them – after the Iron Curtain was torn down in Eastern Europe as well – was a German test-tube pop duo called Modern Talking. 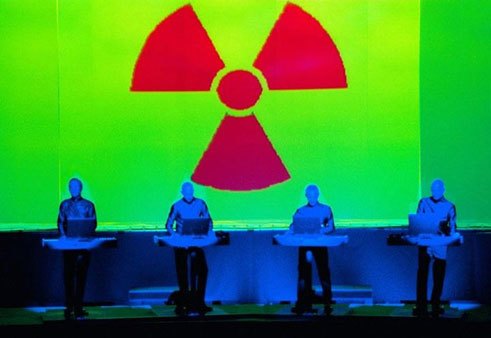 Kraftwerk, | © EMI Music Germany After the war, East Germany proved far less permeable to pop culture than West Germany. Rock ’n’ roll and beat bands were enthusiastically received there, to be sure, at about the same time as in the West. But the alternation between repressive and sometimes more tolerant cultural policies under the shifting Socialist Party nomenklatura impeded the steady development of an autonomous pop music, which ended up being stifled or domesticated instead. Musical innovation was crippled by state control over publishing at the Amiga label, which had a monopoly on the recording industry, buttressed by state-censored radio and strict concert and tour regulations.

In the heyday of rock music, however, some new bands started forming up in East Germany, too, from the late 1960s. Under the requirement that lyrics be written in German and submitted to the censors, many songwriters resorted to metaphorically-charged parallel worlds or self-censorship. Non-conformity with government diktat was punished: the most spectacular instance was probably the ban on the Klaus Renft Combo, a popular and politicized blues rock band in Leipzig. The most renowned exponents of East German rock in the 1970s and ’80s, such as the Puhdys, City, Karat and Silly, distinguished themselves more by their craftsmanship and personal charisma than by any stylistic audacity. Still, a subversive East German music scene did emerge in the 1980s, especially in Berlin and Leipzig, but also in provincial towns like Cottbus. Members of the scene circumvented the Amiga monopoly by privately copying cassettes and holding concerts in quasi-conspiratorial circles. A handful of the leading lights in this movement, including East Berlin’s punk band Feeling B and the Cottbus avant-garde rockers Sandow, actually did manage to get their records released on the state-run Amiga label in the dying days of East Germany, and those records stood out conspicuously from the standard repertoire of international artists’ licenced releases and East German mainstream.

Jörg Wunder
Born in 1964 in the Weser Uplands of Lower Saxony, Wunder has been living in Berlin for 25 years now. A passionate record collector and music journalist, he writes for the Tagesspiegel, Zeit Online and the Berlin city magazine Zitty, among others, and can occasionally be heard on the Radioeins show “Soundcheck”.