Since German reunification, German pop music has prospered and developed a more natural rapport with the use of German lyrics. Nowadays anything goes, including everything from German rock and German rap to German reggae. 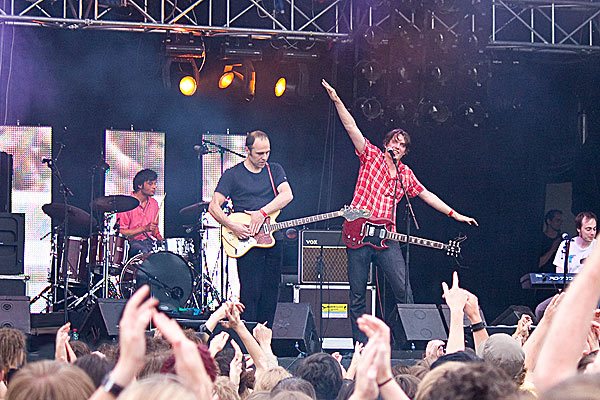 Die Sterne, Donauinselfest 2009 | Photo: Claus Rebler In the summer of 1990, the German national football team won the World Cup in Rome. Afterwards, coach Franz Beckenbauer told the international press the Germans would remain unbeatable for years. The reason: reinforcements in the form of East German players would be henceforth available from the other side of the Wall. And not even three months after the World Cup finals, as a matter of fact, East Germany ceased to exist.

Pop music, on the other hand, was spared any such prophecies. The fact is that the tightly state-controlled music scene in the German Democratic Republic was deemed third-rate – as opposed to sports in the GDR, which actually did come up to the international standards to which the Socialist regime aspired. But – and this is an irony of history – it actually went the other way round: Beckenbauer’s dictum soon turned out to be bunk on the football pitch, whereas German pop, rock and dance music burgeoned after reunification – not only commercially, but also artistically.

Germany’s reunification opened up not only a bigger market for West German musicians, who had not been allowed to concertize or sell records in East Germany.  It also opened up a talent pool that included accomplished musicians who’d been condemned in the GDR to plunking and pottering around underground as well as gifted youngsters not even old enough to take the stage before the Wall came down. East German talent now accounts for a considerable number of the most commercially successful German bands, from Rammstein and Silbermond to Tokio Hotel. 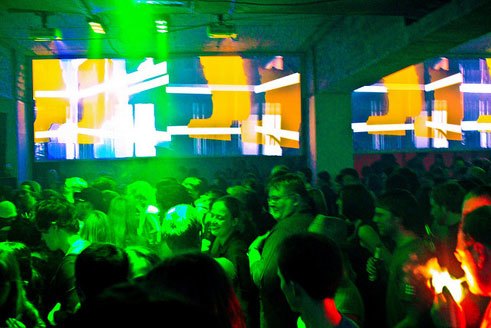 Club WMF Berlin when re-opening 2009 | Photo: nudevinyl Some of the world-renowned German DJs, e.g. Paul van Dyk and Paul Kalkbrenner, also hail from the East side of Germany. In point of fact, what may well be Germany’s distinctive contribution to worldwide pop culture would never have come about if the Wall hadn’t come down. Right after the barriers separating the two German states gave way, creative artists discovered and occupied the vast no-man’s land that lay between the two halves of Berlin, starting up the first techno clubs there. Around and especially under Potsdamer Platz, which was still an undeveloped wasteland at the time, clubs like Tresor, WMF and E-Werk emerged and rapidly gained fame even beyond the city limits. And it was there that they developed the variety of hardcore electronic dance music that was to go down in pop music history as “Berliner Brett”. Not only was Berlin the new capital of the country, it was the capital of techno, too.

The most conspicuous symbol of this development was the Love Parade. The first edition took place in 1989, just a few months before the Wall came down, but with only 150 participants. Reunited Berlin and its vibrant techno scene eventually propelled the parade into a mega-event, which by 2003 was drawing millions of visitors from all over the world and shored up the city’s growing reputation as European Party Central. Unfortunately, the meteoric rise of typically German techno from fringe to mass phenomenon came to a tragic end in 2010 when 21 people died at the Parade in Duisburg due to organizing errors.

But the club scene wasn’t the only one to thrive on reunification. Tokio Hotel, probably the most commercially successful German pop export of the new millennium to date, hailed from Magdeburg in Eastern Germany. If the Wall were still there, the androgynous singer Bill Kaulitz would hardly have had an opportunity to reach screeching teens from Canada to Japan in the mid-noughties.

Before Tokio Hotel conquered the world, the band Rammstein had paved the way for them. These musicians, who had already been active underground in the East German punk scene before the fall of the Berlin Wall, provoked the public with a proto-Fascist aesthetic and garnered incredible success as a caricature of German clichés in the 1990s, particularly in the United States. Rammstein spearheaded a highly controversial movement which the German media generically termed “Neue deutsche Härte” (literally, “New German Hardness”). In the sequel, however, nearly all the NDH bands expressly repudiated any accusations of propagating radical right-wing notions. Truly right-wing extremist bands only gained prominence within the neo-Nazi scene and never managed to make a significant splash in the mainstream.

Even if the allegation of neo-Nazi affinities could be refuted, the Neue deutsche Härte did mark a change of paradigm in the pop scene. The new, larger nation generally developed a more relaxed rapport with its own cultural heritage and the German language. The typical German hang-ups about history had disappeared, but debates about nationalism became the order of the day. As a matter of fact, the vast majority of German rock bands had been writing and singing in English till the so-called “Hamburg School” came along: in the early 1990s, bands like Blumfeld, Die Sterne or Tocotronic played rock that was heavily influenced by English and American indie bands, even while cultivating an ironic but nonetheless serious approach to the German language. These bands never reached a mainstream audience themselves, but they did lay foundations on which later bands like Kettcar and Tomte could build – and finally gained widespread acceptance of indie rock in German. In the wake of this breakthrough, pop bands like Wir sind Helden, Silbermond, Mia, and Juli stormed the charts. And as a result of their success, in turn, record companies actually stopped signing on German bands that sang in English – or advised them to change languages.

German lyrics: a matter of course

As rock and pop sung in German gained currency, a German hip hop scene arose in parallel. Youths from the immigrant community, for the most part, adapted rap from the USA and promptly filled it with local content. Thanks to Die Fantastischen Vier, “German sprechgesang”, as the crew of middle-class white boys from Stuttgart called rap, shot up to the top of the hitlists in the early ’90s, much to everyone’s surprise. Later on, Germany even spawned its own variety of gangsta rap, which spewed out of Berlin’s courtyards to rattle the conventional republic and brought forth stars like Bushido and Sido.

These stars are scarcely noted abroad, but in Germany itself, thanks to the success of German-language rap and rock, German lyrics can now be successfully welded into any genre: Rotfront’s Balkan rock beats have found their public, as has LaBrassBanda’s quirky brand of Bavarian brass music. Xavier Naidoo and Joy Denalane are riding high on German soul, Jan Delay plays German funk and Peter Fox does German reggae. German has become completely natural, a matter of course. And that is the upshot of two decades of reunited German pop music: German can actually be pop.