The trend toward made-in-Germany mainstream continues unabated, Cro is hoisting German rap out of its self-inflicted gangsta crisis, and krautrock's coming back home. Internationally-geared newcomers are finding an audience across the English Channel, whilst German-language singer-songwriters are standing their ground in the pop scene. And policing the whole scene is the German copyright watchdog GEMA – though not to everyone's satisfaction. Thomas Winkler looks back on an eventful 2012.

Seeed | photo: © Rocket Wink Pop music in Germany is becoming increasingly German. That goes for the year 2012, at any rate, if we define success mainly in commercial terms. 14 of the 25 best-selling albums on the German charts last year were by German bands or German solo artists. And the top of the German charts is firmly in native hands. Of the eight best-selling albums in the country last year, "21" by Adele is the only one that isn’t sung or rapped in German.

So the trend that has been going strong for years now continues. Pop music was one of the first sectors to clearly manifest the impact of globalization, and imports from the premier pop exporters, namely the UK and the US, have always loomed large in Germany, as opposed to neighbouring France, for instance.

But this market that was always receptive to Anglo-American pop music has turned into a market that by and large ignores American superstars like Taylor Swift and still treats British whiz kids like Mumford & Sons as an insiders’ tip. Instead, veteran German stars now rule the home market: Udo Lindenberg, who broke new ground back in the 1970s by gaining widespread acceptance for pop music in German, continued his comeback with a successful tour and a brand new album MTV Unplugged – Live aus dem Atlantic. 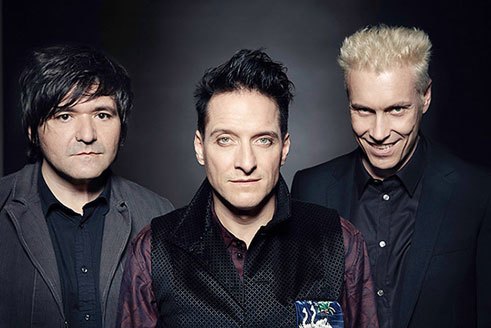 Die Ärzte | photo: © Nela König Die Ärzte from Berlin and Die Toten Hosen from Düsseldorf have been playing in the same league for a long time. Both bands, whose roots lie in punk music, fêted their 30th anniversaries in 2012 with successful albums – and both had to own up in their different ways to being long-standing fixtures of the rock establishment.

As to be expected, Die Ärzte took an ironic view of the matter, asking at the start of auch (“also”), their latest release: “Ist das noch Punkrock?” (“Is this still punk rock?”) – to which they gave the sobering reply: “Ich glaube nicht” (“I don’t think so”).

Die Toten Hosen, on the other hand, simply sidestepped the question and, on Ballast der Republik (Ballast of the Republic), came out more rebelliously and pugnaciously than they have in a long time – for which their fans adored them all the more ardently.

Only one album made it bigger in Germany last year then the Toten Hosen record: that was Lichter der Stadt (Lights of the City) by Unheilig. While the critics were poking fun at him, Unheilig, who hides behind the stage name Der Graf (The Count), touched millions of listeners with his lyrics, which are so vague they can mean anything or nothing at all. The Count interlards his rhymes with catchwords from the toolbox of Romanticism like “freedom” or “longing” as he dreams of better, mostly bygone days.

These songs are as non-committal as the poetry of newspaper horoscopes, and are often underlaid with electronic march rhythms. But even more frequently they are velvety ballads padded with plenty of reverberation. This reverb swathes everything in a big blanket of reconciliation, degrading even forceful and furious Rammstein riffs into children’s song harmonies. 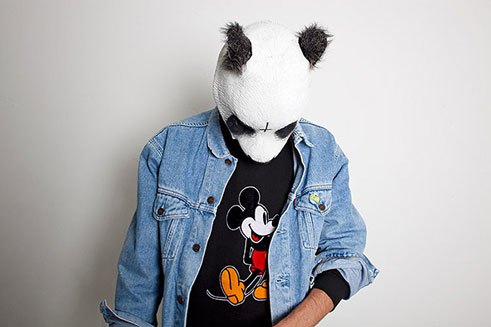 Cro | photo: © Delia Baum And yet the newcomer of the year 2012 was Cro. This rapper from Stuttgart pulled German hip hop at long last out of the morass into which it had been plunged by a spate of second-rate gangsta rappers. Rap had ceased to be a profitable enterprise in Germany when Casper and Marteria in 2011 succeeded in firing up a young new audience that had turned away from hip hop on account of its bellicose, misogynistic and homophobic lyrics. Cro, who hid his face behind a cute panda mask, took hip hop out of the ghetto as he translated the everyday reality of upstanding middle-class youth into sprechgesang. And in his shadow, other groups got a hearing too: e.g. Die Orsons, who only a few years ago would have still been written off as “student rappers”.

Gangsta rap had apparently lost its shock value: German society, especially the rattled middle class, was scrambling to keep its creature comforts intact in the days of the euro crisis. Cro & Co. managed to rap about the preservation of middle-class prosperity as if it were some cool status symbol: “Diese Welt ist geil, denn ich hab alles, was ich brauch” (“This world is sweet ’cause I got everything I need”), he raps in one of his songs, “nein, ich will hier nie wieder wieder raus” (“nope, I don’t ever want out again”).

The second big newcomer from Germany remained by and large unknown in his own country in 2012. In the US, Zedd was filling up big venues, teaming up with Lady Gaga and smiling away on American TV commercials. But here in Germany, the 23-year-old from Kaiserslautern can still cross the street unrecognized, even though the tracks on his debut album Clarity are booming through the clubs these days. He is, after all, the only German exponent of electronic dance music (EDM), a characteristically American fusion of rave and rock'n'roll.


Turning back towards internationalism

Whereas the mainstream – quite possibly as a backlash against the globalization of other areas of life – became more and more German, promising newcomers and the underground scene increasingly modelled their music on international standard bearers. Sizarr in particular made waves: this three-boy band from Landau in the Palatinate got picked by American producer Danger Mouse, who may well be the most creative mind around these days, for the opening act on his tour with Broken Bells. The Guardian, which is renowned for its acumen in matters of pop music, has already attested to Sizarr’s “very distinctive style”.

Me & My Drummer also attracted some notice over in England. And quite rightly: this Berlin-based duo created a world all its own, in which steel-blue electro beats harmoniously meld with trendy synthesizers and stagey vocal lines. The third album to be released by musical maverick Konstantin Gropper under his pseudonym Get Well Soon, with his short, succinct songs in English and his Baroque take on electronic chamber music, likewise looks to role models from the heyday of British pop music.

Meanwhile, German pop history was also being rediscovered: krautrock, hitherto accredited chiefly in Great Britain as an original German contribution to pop history, underwent a revival last year on its home turf. Labels like Bureau B and Grönland have been putting out painstakingly got-up re-releases of classics of the genre for years and are now turning to works by long-forgotten lesser luminaries. Old heroes like Eloy are back on tour, whilst new bands like Stabil Elite are trying to develop a latter-day variant of krautrock, and Camera spend whole nights jamming in Berlin underground stations as if seeking to conjure up in their instrumentals the halcyon days of Can or Amon Düül.

Pop, politics and the German language

In the meantime, though, it was becoming even more of a matter of course to use German in pop lyrics. Last year’s albums by Kettcar, Bernadette La Hengst and Brockdorff Klang Labor reflected societal developments and the political agenda on what was sometimes a remarkably high level of intellectual endeavour. Newer bands like Kraftklub or Frittenbude interweave this approach with hip hop or electro beats, thereby politicizing a younger public. Even the far-left punk scene emitted some unexpected signs of life: in their guitar-strumming Schrammel-style songs, Ecke Schönhauser may have occasionally confused their world of private pain with the world’s pain, but rock doyens Slime reported back for service to melodize lyrics by Erich Mühsam, an anarchist poet murdered by the Nazis way back in 1934.

Even the new generation of German singer-songwriters were able to hold their own despite the flak they got from feuilleton music critics in particular. These “New Mild Ones”, including Philipp Poisel, Tim Bendzko and Max Prosa, supplied a grateful but astoundingly young listenership with unironic inwardness bordering on emotionalism. And yet Maike Rosa Vogel proved that such a journey into the self need not devolve into conventional complacency: on Fünf Minuten (“Five Minutes”), her third album to date, the Berlin balladeer bared her feelings again so uninhibitedly that in her vocals the private sphere actually became political.

Her song “So Leute wie ich” (“Folks Like Me”) is about her experiences as a long-term unemployed woman on the dole, which made her the first musician to give an artistic rendering of the ever more insecure working conditions in her profession.

Two generations of singer-songwriters joined forces in the Kid Kopphausen project. The joint album by 33-year-old Gisbert zu Knyphausen and 47-year-old Nils Koppruch showed that the new singer-songwriters did not come out of nowhere, even if Koppruch as a soloist, or earlier with his band Fink, never garnered the success his shrewd laconic songs might have deserved. It wasn’t until he teamed up with his younger counterpart, Gisbert zu Knyphausen, that a whole generation finally discovered one of Germany’s very best songwriters. But this second spring was cut tragically short when Koppruch died quite unexpectedly in October.

On stage is where the money’s at

The obituaries not only paid tribute to Nils Koppruch’s accomplishments as a musician, but also invariably pointed out that he had to earn his living for the most part as a painter. In Germany as elsewhere in the world, the crisis in record sales made live performances an increasingly vital lifeline for the industry.

Deichkind was one band that made the most of its gigs, producing not only a skilful fusion of pumping techno beats and glam rock that verges on cabaret music, but above all a carefully choreographed and lavishly outfitted stage show, which proved a sensation to rival international superstars at the big summer festivals. Other groups like Seeed, which managed a tremendous comeback after their mastermind Peter Fox pulled the plug on his solo career, and Bonaparte banked chiefly on their live talents and elaborate stage acts.

Many of the venues in which these concerts took place were fearing for their livelihood in 2012 when the GEMA (German society for musical copyright enforcement) announced a dramatic rate hike. Many clubs calculated that they’d have to pay the performing rights society 1500 per cent more than they had in the past. But concert promoters and even musicians, who should actually benefit from GEMA distributions, took to the street to protest against the antiquated system and outmoded assessment criteria. The whole scene feared for its infrastructure. But the worst scenarios now seem to have been averted: the matter is now being thrashed out by a mediation committee, and for the time being the antagonists have agreed on a moratorium.

Any questions about this article? Please write to us!
internet-redaktion@goethe.de
February 2013