As of 2014, krautrock has become a hit export again. And its artistic value is now recognized in Germany too. Hip hop is becoming more articulate, whilst confronting right-wing threats more and more head-on. Some German-speaking pop music artists are now openly flirting with right-wing populist, even fascistic, mindsets. At least we needn’t worry about recruiting the next generation of indie rockers. 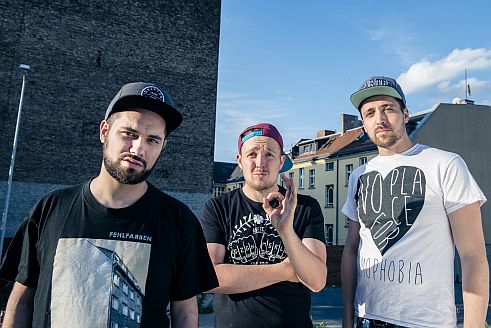 The Memphis of electronic music

Since October 2014, when Suhrkamp-Verlag put out Electri_City, a collection of interviews by Rüdiger Esch, we now know that Düsseldorf is the electronic counterpart to the cradle of rock’n’roll in Memphis, Tennessee. Hence the assertive title of Esch’s book, Electri_City – Elektronische Musik aus Düsseldorf, which locates the history of more than just electronic music, but of krautrock in general, in the Düsseldorf music scene.

So it’s fitting that pop music from Germany should be much in demand lately in various parts of the European, Anglo-American and Asian world. Krautrock is a hipster genre. And that is largely owing to its history, its proclivity for experimenting with sound, and its works, many of which are no longer extant but are gradually being re-released: the popularity of krautrock bands is huge. The band Kraftwerk also have their roots in krautrock. Even old-dandy and adman Friedrich Liechtenstein has made the experimental engineer’s soundscape his own on his ironic album Bad Gastein. Krautrock has long since established itself abroad as a seal of quality for innovative rock music, and is also applied to the style of contemporary bands like Britain’s Metronomy, who got off the ground in 2014.

Oddly enough, though, krautrock has only just recently woken up from its deep slumber in its native country, partly thanks to the 2014 publication of Rüdiger Esch’s oral history. Quoting from interviews with Düsseldorf-based musicians and creative artists, Esch has very vividly brought the 1968–1985 period back to life and fleshed out the connections between krautrock, punk and New Wave that may not have been all that clear to many of today’s young pop fans. And as another successful example of the music industry’s “bundling” strategy, Herbert Grönemeyer released a much-noticed anthology of the bands mentioned in Electri_City on his own label, Grönland Records.

The hip hop children of punk

Not only is pop history suddenly alive and kicking again in Düsseldorf, but a young Düsseldorf rap crew called the Antilopen Gang are making quite a stir. Their debut album Aversion was an unexpected German hip hop hit last year. Unexpected partly because the album came out on the Toten Hosen’s JKP label. In their lyrics, the Antilopen Gang actually manage to reconcile punk defiance (the rappers are said to be the offspring of veteran punks) and hip hop rhymes. Left-wing politics and the defiant mood of self-governing youth centres resound in the Antilopen Gang’s lyrics and sound. But the rappers’ feel for language is more than a cut above that of so-called Zeckenrap (a German left-wing rap genre rooted in Punk).

Haftbefehl (“Arrest Warrant”) (Aykut Anhan), a gangsta rapper from the city of Offenbach in Hesse, is further on in his career now. Further on in his idiosyncratic “Babo” rap-speak, too, which tears apart the Hessian dialect with the Hessian slang of immigrants to the Rhine-Main region. “In die Fress’ Rap/Jetzt gibt’s Heckmeck” (“Rap in your face/Now there’s a fuss”), he rapped with fellow MC Marteria on the song Ich rolle mit mei’m Besten (“I Roll With My Best”) on his fourth album to date, Russisch Roulette, released last autumn. In the video, the two rappers bluster whilst two beautiful women beside them smash up a luxury car in an underground car park with a sledgehammer and hacksaw. By the end of the year, Russian Roulette had sold over 250,000 copies, a remarkable showing for German hip hop. “Hafti’s” manager Erfan Boulanchi made it clear: “Seriousness isn’t always our genre’s forte, and yet his determination...to succeed has favourably surprised a lot of people.” The Süddeutsche Zeitung was likewise taken with Haftbefehl’s determination, commending Russisch Roulette and its droning, gloomy sound as a “huge step forwards”.

Actor Ben Becker’s career, on the other hand, doesn’t seem to be making much headway. His appearances on 21 and 22 June 2014 as a bellowing, rabble-rousing muscle man for the comeback of the infamous German rockers Böhse Onkelz (literally: “Evil Uncles” – albeit deliberately misspelled) at the Hockenheimring arena seemed almost eerily desperate. “Everything’s gonna be smashed to pieces here,” he shrieked into the mic. Some German-language pop and rock artists are now openly flirting with right-wing and fascistic imagery and political messages, a posture now acceptable to the mainstream public ever since Freiwild, a schlager band from South Tyrol, made the charts. Even R&B singer Xavier Naidoo from Mannheim took the podium to speak at the rightist Monday demos in 2014.

Austria’s self-proclaimed “people’s rock’n’roller” Andreas Gabalier, who has repeatedly topped the charts lately here in Germany, too, and has his own show on German TV, likewise makes manifold references to the new right wing. On the cover of his album Der Volksrock'n'Roller, he strikes a pose that can be interpreted as representing a swastika. During the football World Cup he toured the big open-air arenas, performing to 20,000 spectators in Berlin’s sold-out Waldbühne on 4 July 2014. Gabalier’s lyrics appeal to the “idyllic” world of Heimatfilms and subscribe to the old-fashioned gender order. His songs sound like the advertised world of traditional alpine dress suddenly come to life. In Austria, Gabalier has close ties to the right-wing populist FPÖ, and the party have defended him against criticism time and again – as they did when he sang an obsolete version of the Austrian national anthem dating from pre-1946.

They’re young and confident – and need the money

Among the interesting new bands from Germany, two up-and-coming groups that attracted notice last year have to be mentioned. Schnipo Schranke, two girls from Hamburg, made quite a splash with a maverick mix of assertive hip hop gestures, chanson staging and self-assured lyrics. Their song “Pisse” snowballed into a veritable indie hit. Their debut album is coming out in 2015, and the duo garnered plenty of recognition and good press on their first tour in September 2014.

Die Nerven, a young noise punk trio from Stuttgart, put out an ambitious second album last year called Fun, wholly unaffected by all the hype around the band and seamlessly resuming the noisy sound with which they’d already made a name for themselves. The band toured Germany twice last year. Various veteran artists became active again, releasing new records and/or going back on tour in 2014, including Andreas Dorau and Blumfeld, Mutter and Die Sterne.

Pop music with German lyrics is still dominated by artists in the tradition of the so-called Hamburg School. This is partly owing to the infrastructure of Hamburg’s music scene, its relatively familial incorporation into subcultural structures that have evolved in the Hanseatic city, such as the association Rockcity e.V., which provides hands-on help and advice to young aspiring artists.

But how can this locally grounded German music scene survive economically? Judging from developments in the global market, the situation seems worrisome where sales in the digital sector are concerned. Take Spotify, for example. The Swedish streaming service is now used by over 40 million users worldwide, roughly a quarter of whom pay a regular subscription. But artists are now more and more vociferously refusing to allow their works to be put on Spotify, which pays a mere 0.6 cents per streamed* song. So only superstars who charge huge fees and can expand their target audience on the web through Spotify are actually making money on the deal. Other artists have been hard hit and need to tour more often, playing concerts nearly all the time just to make ends meet. On a happier note, however, more vinyl albums were sold in 2014 than in many years previous. The “tight-is-right” mindset has failed to prevail nationwide. Even young pop listeners have now developed an appreciation for the collecting value of albums. Merchandising at concerts has become a sort of memorabilia trade in which fans can take home a souvenir of the event, something no mobile app or posted photograph can do. At least not yet.

Julian Weber has served as music editor for the tageszeitung (taz) in Berlin since 2009. He occasionally writes for the Swiss papers Neue Zürcher Zeitung and Wochenzeitung (WOZ) and puts together radio shows (for Deutschlandradio Kultur, Bayerischer Rundfunk’s Zündfunk magazine).

An overview by Christoph Dallach.