German pop music is booming. Here in Germany – in purely statistical terms – it’s more successful than ever. “Domestic” productions jumped from a 29.5 percent share on officially listed album sales in 2001 to a 49 percent share last year. 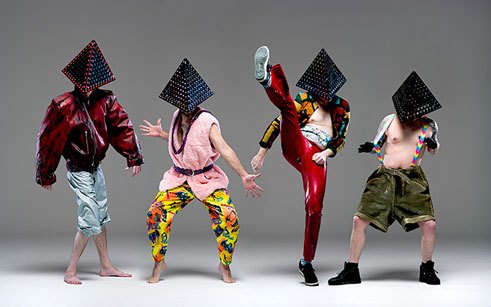 Deichkind | Deichkind For decades the domestic music market has been very receptive to international trends, and as recently as in 2004 the German Bundestag was debating a quota to promote domestic songs on the nation’s radio waves. But nowadays at least the mainstream segment is thriving even without any such pump-priming policy measures. “A look at the charts shows that German is in, and both new and established German artists are spurring one another on,” says Florian Drücke, executive secretary of the German Music Industry Association (Bundesverband Musikindustrie, BVMI), in his take on the trend of 2011. The industry has good reason to be quite content. In contrast to the brief burgeoning of Neue Deutsche Welle (New German Wave) in the 1980s, the success is now buoyed up by various genres. Sales of German pop have broken one record after another, thanks, in particular, to the foolproof formula of the modern-day love song. Rosenstolz, Xavier Naidoo and Annette Humpe of Ich&Ich have perfected, each in their own way, certain compositional templates: modern beats and touchy-feely German lyrics that are tailor-made for radio programmes and Facebook fan forums.

The Mild Ones and the Gruff 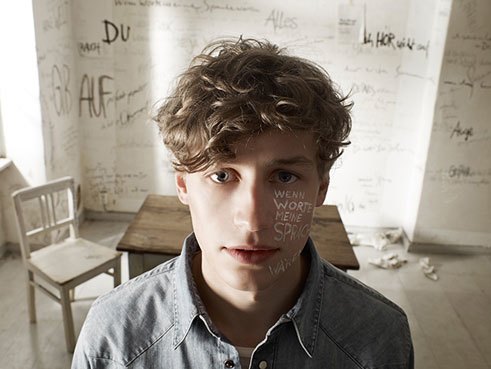 Tim Bendzko | photo: © Alexander Gnädinger 2011 In 2011, this principle of melodious introspection turned the traditional singer-songwriter format inside out. Philipp Poisel, a guitar-strumming poet from Ludwigsburg, who in 2008 was still playing small-time provincial clubs, got to perform his song Seerosenteich (“Lily Pond”) on festival stages to ten thousand rapt spectators. And last year Tim Bendzko sold a whopping 300,000 copies of his medium-tempo song Nur noch kurz die Welt retten (“Just Got to Save the World For a Sec”). With his brooding album title Wenn Worte meine Sprache wären (“If Words Were My Language”) Bendzko has come up with the unofficial motto of this wave of mild-mannered talents. Musicians like Max Prosa, Tiemo Hauer and Andreas Bourani, all in their early 20s, play upscale music for teenagers that pleases their parents, too. This is a new song culture that assiduously draws on the techniques of the handmade soul ballad. The piano or the guitar is always at hand whenever day-to-day doldrums lower in the offing. “Ich stehe einsam an den Gleisen, sehe euch von Weitem winken. Seh’ im Ozean der Melancholie, ein kleines Schiffchen sinken” (“I’m standing lonely by the tracks, see you waving from afar. I see a little ship sinking in an ocean of melancholy”), sings Tiemo Hauer in Losgelassen (“Cast Adrift”).

While the new Mild Ones generation has rediscovered the ballad, songwriter Thees Uhlmann has charted a different course on his solo album. Set in the hinterland of Lower Saxony, his songs avail themselves of a personal idiom, too. However, the singer from the band Tomte takes his bearings by American rockers who are ruggedly rooted to their native soil, and thus far he has done without any occasionally shallow lyricism. Uhlmann’s album made the charts briefly too in 2011, but in this scene, smaller-scale releases and club tours are generally the norm. In 2002, together with Kettcar’s frontman Marcus Wiebusch, Uhlmann set up Grand Hotel van Cleef, an independent label in Hamburg that publishes soloists ranging from Bernd Begemann to Tim Neuhaus, in addition to its own productions. Naturally, these artists’ lyrics are too weird and unwieldy, the music too austere and idiosyncratic, to make for commercial hits.

The discreet rise of the female duo Boy, however, goes to show that there are alternatives to the omnipresent trend of kitchen-sink lyricism in German. With the English lyrics and refined arrangements on their album Mutual Friends, Valeska Steiner and Sonja Glass can fill a medium-sized club. The video to their single Little Numbers is set in the streets of Barcelona, and Boy won a European Border Breakers Award at the Eurosonic Festival in the Dutch town of Groningen. Their featherweight folk-pop songs are now on the cusp of an international career.

Artists’ labels are an alternative

Artist-run labels have become a viable alternative to the conventional recipes for success in the industry. The Berlin label Staatsakt, for example, provides a home for a motley crew of individualists including Ja, Panik; Die Türen; Bonaparte; a duo of sisters called the Jolly Goods; Frank Spilker; and Christiane Rösinger. With Rentner und Studenten (“Pensioners and Students”), Staatsakt label chief Maurice Summen’s band Die Türen made an ironic contribution to the year of the “Occupy Wall Street” protest culture. The video shows a bored protest march carrying blank white posters through the streets of Prenzlauer Berg in Berlin. “Those who sleep longer in the morning last longer in the evening.” “The opposite of good is good-humoured” – messages that hark back to the 1970s Tunix (i.e. “Do Nothing”) movement.

Ja, Panik, the band around singer Andreas Spechtl that upped tents and pegs from Austria up to Berlin, also broke new ground on the album DMD KIU LIDT. Instead of championing the bourgeois bliss of heterosexual love, they bang the drum for resistance and destruction ("Suicide is love, is passion") in a mingling of German and English lyrics. The collaboration with Hans Unstern and Christine Rösinger prompted plenty of artistic reflection, in which the band drew their energy from the musical chasm between No Wave and New Wave. 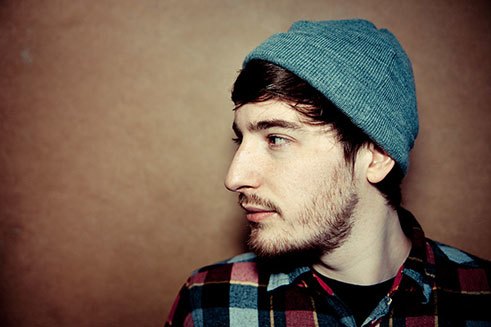 Casper | photo: © Andreas Janetschko Casper Hip hop underwent upheavals last year. The number-one ranking of Casper’s album XOXO marked the change of perspective. With his socialization between hardcore and The Smiths, the rapper brought a rock music approach back into the genre. Against a backdrop of harsh guitar samples, Casper belts out self-doubts and anxieties, setting himself apart from the crude punning of his macho fellow rhymesters: “Der Druck steigt, Atem blockiert, wir scheitern immer schöner, sind Versager mit Stil, haben nicht viel” (“Pressure’s rising, blocking breath, we fail more and more beautifully, we’re losers with style, ain’t got much”) (from the song Der Druck steigt). At any rate, the vice-grip of German gangster rap has been broken, especially as this genre no longer has a hub now that the Berlin labels Aggro Berlin and Royal Bunker have shut down.

Erstwhile poster-boy provocateurs Sido and Bushido, on the other hand, have long since turned to show business for their future careers. The movie Blutzbrüdaz retraces Sido’s beginnings in a humorous look back. 23, an oddly uninspired collaborative album by the two of them, hardly has any innovative beats or rhymes to show for itself. The collaboration with Peter Maffay on the song Erwachsen Sein (“Being Grown-up”) is not the only track that smacks of an attempt to curry favour with the pop crowd. It is precisely this maturation of hip hop that involves a tricky artistic balancing act: whereas Samy Deluxe in the wake of the release of the album SchwarzWeiß (“BlackWhite”) dealt critically with his younger peers’ gangster attitudes, Prinz Pi inveighs against media clichés about the hip hop scene in songs like Beweis dagegen (“Evidence to the Contrary”) on the album Rebell ohne Grund (“Rebel Without a Cause”).

Power to the stage 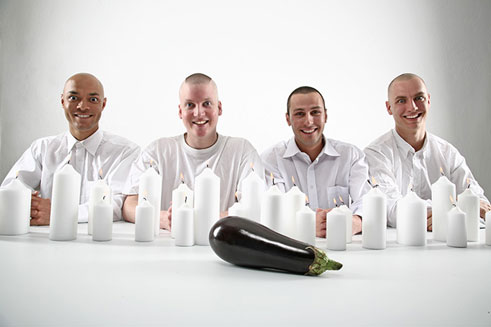 K.I.Z. The live show is yet another way of getting away from genre barriers. On their album Urlaub fürs Gehirn (“Vacation for the Brain”), the Berlin-based rap crew K.I.Z., which is the most successful group promoted by the now-liquidated hip hop label Royal Bunker, ratcheted up their playful use of cynical lyrics. Politics, society and hip hop attitudes are derided in a wild canon: “Vierhundert Jahre Sklaverei war genug Fitnesstraining, Geh' ein Busfahrer klatschen, um mein Frust abzulassen” (“400 years of slavery was enough fitness training. Gonna smack a bus driver to let off my steam”). Like Deichkind, which came out in February 2012 with a new album, Befehl von Unten (“Order From Below”), K.I.Z. know how to turn their over-the-top shows into an interplay between hip hop and electronica.

The bands Frittenbude and Egotronic, which together with Click Click Decker and Bratze form something of a radical leftist society, a sort of funster guerrilla, on the electro-punk-geared label Audiolith from Hamburg, also know how to go berserk collectively along with the crowd. The young Chemnitz-based band Kraftklub went about it the other way round on their explosive debut Mit K (“With K”), interlarding their garage rock with rap rhymes and riveting audiences with their sweat-drenched live shows, chanting: “Ich komm aus Karl-Marx-Stadt, bin ein Verlierer, Baby, original Ostler” (“I’m from Karl-Marx-Stadt [as Chemnitz was called in GDR days], I’m a loser, baby, a real East German”). The cliché of left-behind Eastern German youth is carried to extremes here – based loosely on the original Loser by Beck. 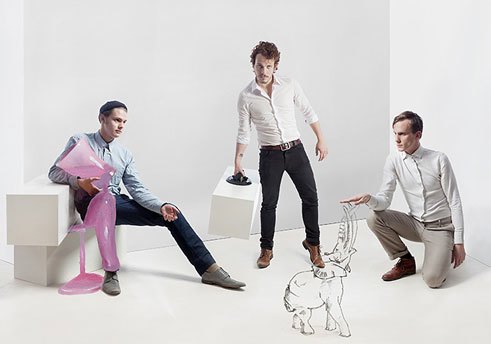 Stabil Elite | photo: © Alexander Romey The only real sonar innovations of 2011 were the work of the nation’s avant-garde. Stabil Elite, an up-and-coming band – average age: 23 – from the Krautrock scene, came up with some buoyant rhythmic and sound structures. Their brand of retro-futurism, with song titles like Metall auf Beton (“Metal on Concrete”) and Endecomputer (“End Computer”), originated in the “Amateur’s Salon” at the Kunsthalle museum in Düsseldorf, which is run by Kreidler member Detlef Weinrich. Ranging between the poles of DJ culture and three decades of Rhenish electronic culture from Neu! to DAF, Stabil Elite bank on a heady brew of dappled synthesizer passages and bitchy guitar sounds on their album Douze Pouze.

The Bavarian brand of world pop is a special form of regional eclecticism that has established itself on a hitherto unimagined scale: the high-speed brass ensemble La Brass Banda drew over 10,000 people to an anarchic folklore pogo party in Munich’s ginormous Olympiahalle last year. But more recent phenomena, like the rap and brass collective Moop Mama in Munich, have developed a very outlandish mix of furiously duelling trumpets, saxophones and rapped lyrics. On the album Beat Konducta Bavaria (which can be downloaded off the web free of charge), DJ Sepalot of the Blumentopf crew in Munich undertook a remarkable stylistic experiment: he fused word and sound samples drawn from Bavarian folk music into rhythmic collages, demonstrating that Schuhplattler [a Bavarian folk dance performed by male dancers] and brass band music can really groove.

Ralf Niemczyk
has been writing about music, pop culture, sports and urban planning since 1982 for underground and mainstream magazines alike.