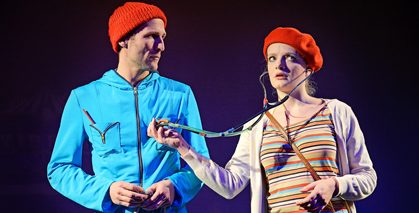 Music theatre for children in Germany is currently varied and ranges between the conventional and the innovative. Departments for young people’s opera have now become de rigueur in nearly every opera house.

Apart from well-known fairytale operas (for example, Humperdinck’s Hansel and Gretel) and some of the classics that have been adapted for children in scaled-down form and with a reduced cast (for example, The Little Magic Flute), few new works appear on the programme of the music theatres for children. New children’s operas are developed at multi-genre houses where an intendant or opera director brings to bear his personal commitment.

In 1996 Europe’s first children’s opera venue was founded in Cologne and given a place of its own in the upper foyer of the Cologne Opera, where only performances for children are shown; in February 2012, at the Comic Opera in Berlin, a symposium for producers of children’s operas looked back on ten years of the development of operas for a youth audience; and in 2011 the Opera Piccola at the Hamburg State Opera celebrated its tenth anniversary – to mention only a few examples.

With each other instead of neck and neck

For the past few years other things have been in progress at several places in Germany. Opera makers and children and youth theatre artists have been working together in various structural configurations to discover new works for the children’s opera stage or to develop them in extensive and elaborate processes of production. Some examples are the Young Opera at the Mannheim National Theatre, founded in 2006 as a new department, in which the Opera and the children and youth theatre Schnawwl collaborate; the Stuttgart Young Opera, which has been continuously performing for a young audience for nearly two decades; the Dortmund Young Opera, founded in 2006; the Young Opera at the Hanover State Opera; and the Young Opera of the Deutsche Oper in Berlin, which was launched in the 2012/13 season and has just found a venue in the newly-built joinery. Also noteworthy is the collaboration of the independent children and youth theatre group Pfütze (i.e., Puddle) with the Fürth Municipal Theatre: in March 2012 they together founded the jungeMET, a contemporary music theatre for children in the metropolitan region of Nuremberg.

Such collaborations issue in many different paths that bring together the skills of specialists from both fields. The one group brings with it its experience with materials and forms of performance and narration for children; the other its knowledge of working in music theatre. New works for music theatre are not created exclusively on the desks of librettists and composers. They need the cooperation of the participating ensembles and require therefore elaborate and long-term production processes that cannot be fitted hitch-free into those of opera houses. In this way arise works that seek their point of reference not in traditional forms of opera but rather in exploring the many opportunities that music, song and scene afford to present contemporary contents for children and contemporary music jointly and equally.

With children, contemporary music theatre can be re-invented. Children experience strange soundscapes and unusual scenic presentations without bias, because they have not yet internalised the conventions prescribing how music theatre should sound and be performed. They are therefore more apt to be seduced by unknown audio and visual experiences than the convention-conscious opera audience.

The first symposium on music theatre for children and its results

These developments are still in their infancy. The participating artists therefore seek exchange with each other. In 2009 an occasion for such discussions was offered at the Mannheim National Theatre by the First Symposium on Contemporary Music Theatre for Children, organised in collaboration with the Children’s and Young People’s Theatre Centre in Germany and the ASSITEJ. It posed the question: “What Kind of Music Theatre Do Children Need?” About 100 participants gathered to take stock of what music theatre for children is. The symposium resulted in the publication of the Mannheim Manifesto. This bundled together the structural, substantive and aesthetic challenges facing a music theatre for children that would stand alongside the other forms of performing arts with self-confidence and in tune with the times.

It also launched the ASSITEJ’s Work Group on Music Theatre for Young Audiences, where a growing number of representatives from various opera houses and departments, children’s and young people’s theatres, publisher, composers, librettists and scholars have been regularly meeting at different places since May 2010 to exchange views on diverse aspects of current developments. The viewing and review of current productions provides the stimulus for joint discussions of working methods, conceptions, structures and perspectives.

So far the group has met quarterly. Subjects have ranged from production discussions, forms of exchange, repertoire development and production structures to communication, aesthetic impact, networking and spatial visions, further meetings are planned. The meeting in March 2013 at the Young German Opera in Berlin addressed participatory forms in music theatre for young audiences.

Annett Israel is a theater scholar and a staff member of the Berlin Office of Children’s and Young People’s Theater of the German Federal Republic.