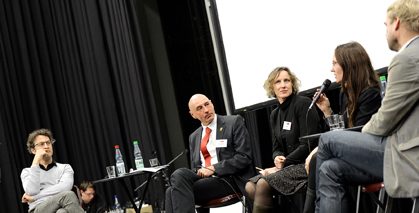 In November 2012, the Second Symposium on Contemporary Music Theatre for Children brought together at the Oldenburg State Theatre about one hundred professionals from the areas of opera and children’s and young people’s theatre who are willing to think beyond traditional genres and reflect on what constitutes successful contemporary music theatre for a young audience

The symposium took place again in conceptual collaboration with the Children’s and Young People’s Theatre Centre in Germany and the ASSITEJ (International Association of Theatres for Children and Young People). It posed the question: “What distinguishes successful contemporary music theatre productions?” and viewed as examples five very different performances from Germany and the Netherlands so as to discuss the productions critically using various analytical methods (lecture, work groups, audience discussion).

More particularly, the over one hundred participants from all over Germany and other European countries pursued the question of how music, text and scenic resources relate to each other, how they serve to narrate material and what interactions arise from their respective expressive qualities. In the end, music theatre differs from the theatre of the spoken word in that its “audience is listening to music”, as Prof. Dr. Matthias Rebstock observed in the discussion Sign Systems in Music Theatre for Children. The musician as actor, who not only visibly makes music on stage but also becomes a co-performer playing freely and without a music stand, assumes a significant rôle.

Diversity instead of a canon of forms

Prof. Dr. Melanie Unseld, in her lecture Narrativity in Music Theatre for Children, spoke about the historical development of assigning meaning to music through the text. She concluded by proposing that contemporary music theatre withdraw equally from the narrative constriction of music that began in the nineteenth century and from the opposition of serious and popular music. Instead, it should open itself to that range of differences which has shown itself in the diversities of contemporary music, the transculturality of society and changing gender roles.

The strived-for experimental processes, in which new music theatre works arise through the encounter of children’s and young people’s theatre makers and opera producers, set authors and composers before particular challenges because they no longer merely deliver a finished piece. They take part in a joint production process with the ensembles, in which everything is kept open as long as possible. These processes are therefore complex, divided into various stages and have to be fit into the ongoing operation of a theatre by skilled planning.

Anselm Dalfert, the music theatre dramaturge at the Mannheim National Theatre, describes such a production process at the Young Opera as applied research, for there are no rules. Knowledge gained in practice flows back into the practical preparation for a premiere. This presupposes that the participating partners, who come from children’s theatre or from music theatre, know what their colleagues can do and share a fundamental understanding of music.

How diverse contemporary music theatre for children can be may be seen in the five premieres invited to the symposium: the stage production Sturmkind (i.e., Storm Child) by Hannes Dufek and Finnigan Kruckemeyer, performed by the hosting Oldenburg State Theatre at the opening of the conference; Duck, Death and the Tulip (Ente, Tod und Tulpe) based on Wolfgang Erlbruch’s children’s book with music by Leo Dick that dispensed with vocals and worked instead with very gestural music and an exact language of movement; Der unsichtbare Vater (i.e., The Invisible Father) by Juliane Klein and Amelie Fried, performed by Theater Pfütze from Nuremberg, a mobile production of the Stuttgart Young Opera in which the entire audience took part in the stage action; Iceberg to Sicily (Eisberg nach Sizilien) by Kurt Schwertsik, based on Friedrich Karl Wächter’s children’s play, a production by the Mannheim Young Opera; and Goud(i.e., Gold) by Leonard Evers and Flora Verbrugge, a production of the Jeugdtheater Sonnevanck from Enschede, which with a cast consisting of a musician and a singer-actress convincingly re-told the old story of the fisherman and his wife from the point of view of a child.

At the Second Symposium it became clear that neither the experts from children’s and young people’s theatres nor those from opera are currently in possession of established findings, much less a canon of forms, that could define contemporary music theatre for children. If they want to advance on their path, they will have to rely on unconditional openness, mutual responsiveness and an effort of mutual understanding about what they together want to bring about in this experimental field.

The stimulating atmosphere of the symposium spoke of a common will. The discussions, including those about how the training of musicians and singers must change, will be continued – for example, in ASSITEJ’s Work Group on Music Theatre for Young Audiences and at future professional conferences, but above all where new works are being created: in production teams, in theatres, and with organisations that fashion the spatial, planning, personal and budgetary conditions that enable experimental forms of cooperation to become a natural part of the creation of works of music theatre.

Annett Israel is a theatre scholar, dramaturge and staff member of the Berlin project office of the Children’s and Young People’s Theatre Centre in Germany.