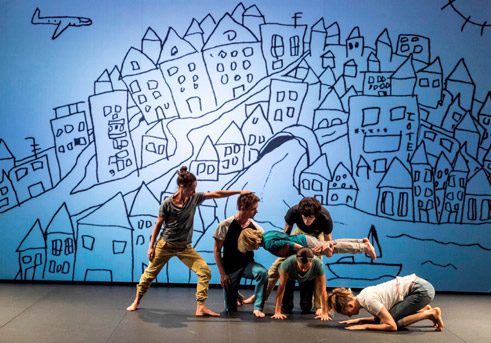 The children’s and young people’s theatre festival Augenblick mal! (i.e. Wait a Minute!) will take place on 21 – 26 April 2015 in Berlin. It will bring together over 200 theatre experts from around the world and show twelve productions that make a striking use of the body.

Every two years Augenblick mal!, the theatre festival for the young audience, acts like a magnet on the German and international children’s and young people’s theatre scene. But also the young Berlin audience greatly enjoys the selected productions, shown at various venues in the city.

On first glancing at the 2015 festival programme, you are almost overwhelmed by the abundance of offerings: twelve productions from Germany and abroad will be shown, over 200 international theatre experts foregather to hold a working meeting of ASSITEJ Artistic Gathering (AAG15) and celebrate the 50th anniversary of ASSITEJ. Augenblick mal! 2015 is relying on intense communication of the present theatre artists from around the world.

The productions are the occasion and basis of the exchange.Five curators have found them within a year in the abundance of 190 proposals submitted by German children’s and young people’s theatre.It is striking that the body and its own activity take centre stage in some of the productions. The selection committee consisted of the dramaturge and theatre critic Dirk H. Fröse, the cultural journalist Bernd Mand, the theatre maker Steffen Moor, the dramaturge, theatre educationalist and project director Anne Paffenholz and the dance journalist Melanie Suchy. 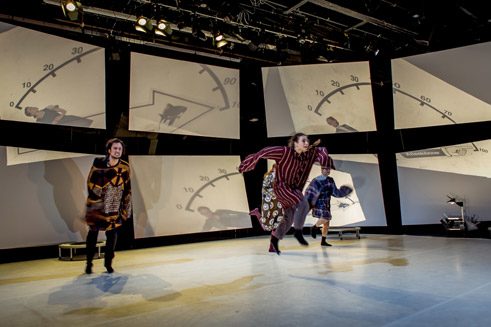 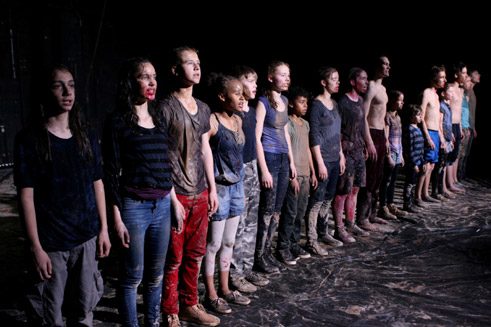 “Kinder/Soldaten” (i.e. Children/Soldiers) (Theater Bremen) | © Jörg Landsberg By contrast, the performance of seventeen adolescents from Bremen in Kinder/Soldaten (i.e. Children/Soldiers) takes place in the harsh light of reality. This piece is conceptually and aesthetically part of the second area of the festival selection, consisting of research-based plays that are strongly performative and interdisciplinary. In Kinder/Soldaten, the young actors relinquish their secure, middle-class existence to slip into the roles of children soldiers who are constantly confronted with death and trained to be fighting machines. They read out interviews with children soldiers and gradually transform the initially almost empty stage into a battlefield. Incidentally, this is the only play at Augenblick mal! that works exclusively with lay performers.

Amongst the performative pieces we should also single out Trashedy (Performing Group): with virtuoso use of the body, the two performers question our consumer behaviour and search for “ecological intelligence”. That they thereby instructively address their own fears with considerable humour shows the refreshing departure of children’s and young people’s theatre from the wagging finger of the problem play. Steh deinen Mann (boat people projekt) (i.e. Man Up) (boat people projekt) will be performed at a special venue: the one-man show, which treats homosexuality in professional football, will be shown in a dressing room – recently in that of the football club Schalke 04. 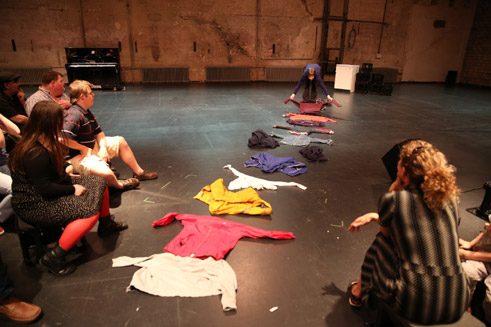 “nimmer” by Antje Pfundtner in Gesellschaft/K3 Kampnagel Hamburg | © Anja Beutler Athird category of the selected plays, is “classical drama”: Räuberhände (i.e. Robbers’ Hands) (Thalia Theater Hamburg), 35 Kilo Hoffnung (i.e. 95 Pounds of Hope) (Junges Staatstheater Braunschweig) and 2 Uhr 14 (i.e. 2:14 pm) (Theater der jungen Welt Leipzig) all focus on the ensemble. 2 Uhr 14 is the only production in the selection based on a dramatic model. The author David Paquet adroitly handles the difficult theme of spree killing, relying on the courage and humour of the characters instead of dwelling on the horror of the calamity.

What trends are reflected in the selection? It banks on plays which make a marked use of the body, are moving, aesthetically ambitious and fun, but which also challenge the young audience. Also striking: the absence of plays from the areas of music theatre, puppet theatre and theatre for the very youngest.

Amelie Mallmann has been active as a freelance dramaturge, theatre educationalist, lecturer and moderator since 2011. Since 2006 she is member of the board of the Society for Dramaturgy.

directors working in Germany on plays aimed at a young audience