Theatre in the classroom
The genre of mobile drama 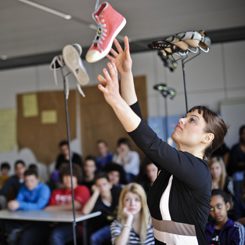 It seems natural to use the emotionally charged space of the classroom as theatre space, and yet the experience of art in this well-known everyday space represents a particular challenge for writers and theatre artists.

“Fates are decided within these walls; here there are tragedies and comedies; here take place stories of love and hate, joy and disappointment.” With these words, the Norwegian dramaturge Carl Morten Amundsen (born in 1961) commends the classroom as the scene for drama and scenic action. In the 1980s, the dramatic genre of the classroom play conquered German-speaking schools. Leading the way, Ad de Bont’s Mirad, ein Junge aus Bosnien (i.e. Mirad, A Boy from Bosnia) has been performed in German classrooms in 53 productions since 1993. But this text form has played a significant role in the theatre only since the turn of the millennium. It was first in 2002 that the Theatre of the Younger Generation in Dresden invited classroom plays to the festival Theatre in the Classroom. Second and third editions of the festival were held in 2005 and 2007.


Theatre – but now in the classroom?


A classroom play, as the name suggests, is a play intended for performance in schools. Formally, classroom plays are often characterized by a comparatively direct way of addressing their audience and a small cast (often only one or two actors). Content is clearly dominated by an educational intention, especially directed to young people. The classroom play has become a favourite text form for theme plays. Currently, themes such as media consumption, social media mobbing and stories of migration fill the repertory and so the classroom. The aesthetic situation of the classroom play arises in that the theatre comes to the audience and not the audience to the theatre. The changing classroom space and its equipment become factors in the play and the great unknown for the actors. 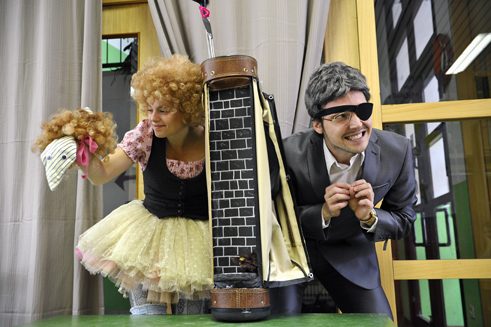 „Spatz Fritz“ (i.e. The Sparrow Fritz) by Rudolf Herfurtner (Premiere 1999) | © Christian Kleiner Frequently writers choose the classroom itself as the venue, as in the hit play Klamms Krieg (i.e. Klamm’s War) by Kai Hensel. Klamms Krieg was premiered in 2000 in Dresden and, with 34 productions, was the most performed play in Germany in the 2004/05 season, ahead of even Goethe’s Faust. The character Klamm is a teacher; the audience is included in the passive role of members of his advanced German course. The play treats the relationship between teachers and pupils and so makes the real scene the same as the scene of the play.

Jörg Menke-Peitzmeyer is the most experienced author of classroom plays. His play Steht auf, wenn ihr Schalker seid (i.e. Stand Up If You’re Schalker) (2005), about the inner life of a female football fan, enjoyed 20 productions and has been translated into five languages. With Ich bin ein guter Vater (i.e., I’m A Good Father) (2008), he created a classroom plot of the second generation: a father goes to his son’s school to bring him his sports bag, but discovers his son is not in class. The monologue of the conscience-stricken father, torn between career and fatherhood, develops with the audience in the role of his sons’ classmates. Using this basic situation, Menke-Peitzmeyer compellingly shifts a socially relevant theme to the classroom.

Theatre events based on classroom plays of this kind play with the boundaries between art and everyday life. The question of the verisimilitude of the characters and the story is part of the tension. The story unfolds accordingly along the edge of an invisible theatre.


Performing arts bursting into the classroom


The performing arts have also been bursting more and more into the German classroom and the daily life of the pupils with another acting and directing approach. In Schuhe Shoppen (i.e. Shoe Shopping) (German premiere 2012) by Tim Crouch, theatre brings a fairy tale from the modern consumer world into the classroom and transforms it with a shoe installation in the course of the performance into an art space. This story takes place everywhere except in the classroom. In his Der Junge mit dem längsten Schatten (i.e. The Boy with the Longest Shadow) (German premiere 2013), Finegan Kruckemeyer sets a mobbing story in school surroundings, but also not in the classroom. Here too emphatically theatrical resources are demanded to interpret the text in an everyday space.

On the basis of classroom plays for young people, some theatres for a young audience have also been conquering the classrooms of elementary schools and even the group rooms of kindergartens. Initially, only a few writers devoted themselves to outreach art experience for a young audience. Pointing the way, Thilo Reffert’s Nina und Paul (i.e. Nina and Paul), a classroom play for fourth graders and up, won the 2013 Mülheim Children’s Play Award. Other theatres produce works written originally for the stage for this age group especially for the classroom or group room. This has happened with Spatz Fritz (i.e. Fritz the Sparrow) by Rudolf Herfurtner (premiere 1999, as group room play 2013) and Pompinien by Ingeborg von Zadow (premiere 1995, as classroom play 2014).

Like productions in public space, theatre events based on classroom plays of this sort play with the boundary between art and everyday life. All performances based on the genre of mobile drama benefit from a relaxed audience viewing the play in familiar surrounding. Receptivity and willingness to enter into something dislocating are particularly high in these circumstances.

Anne Richter is a dramaturge at the Schnawwl in Mannheim and has long been a part of theatre for children and young people, including as a critic. In addition, from 2009 to 2010, she travelled through Germany as curator of the German Children’s and Young People’s Theatre Meeting, Hang On There! (Augenblick mal!), and is a jury member of the Youth Theatre Prize of Baden-Württemberg.