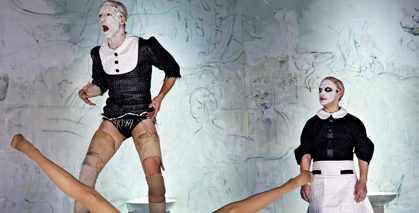 Festivals have their own dynamics. This is also true of the Mülheim Theatre Festival, which has in recent years spun an ever finer web of cooperation. The dynamics of current play production, on the other hand, is also its very own. The festival invites and honours theatre texts that satisfy the quality criteria of the selection panel and a jury that at the end discusses its decisions before the public.

In the past year of German-language theatre, premiered plays were not so numerous as in previous years, yet included a large number of remarkable pieces. If the Mülheim selection panel usually chooses between 130 and 150 premiered plays, this year it was “only” 100. But there was something in them. A number of linguistically brilliant debuts were grouped round a social and political issue currently dominating the headlines.

In the penal code it goes under the name of “sexual abuse of wards”. Many plays of the 2012/2013 season treated this issue and no longer contented themselves, as in previous years, with mere hints. They handled the subject with such intensity that they almost seemed to say: if you treat a subject like this, then you should be willing to illuminate it down to the last detail. This sometimes happened, as in the case of Katja Brunner’s Von den Beinen zu kurz (Too Short in the Legs), a merciless close-up that overrode all the usual explanatory models. Brunner was eighteen when she wrote the play. In it we hear the voice of a Lolita who negates all the traditional victim schemas and pursues seduction, desire and possession. There is no longer a victim and a perpetrator, but rather only the scandal of incestuous desire. Above all, the language of the play is so convincing that Von den Beinen zu kurz, in the production of the Hanover Schauspiel, was not only one of the eight invited performances, but at the end of the festival the jury also awarded Katja Brunner the Mülheim Dramatist Prize.

The young author was flanked by two heavyweights of dramatic art. In her FaustIn and out, Elfriede Jelinek has written a so-called “secondary drama”, a play that, according to her, “runs yapping alongside a classic” like a mangy mutt. Such a work can be produced only if the performing theatre also has the corresponding classic on the programme – in this case, Goethe’s Faust. Invited to Mülheim was the premiere production by the Zurich Schauspielhaus, which dovetailed Faust and FaustIn so cleverly that the two cases of abuse from very different times were mirrored even more clearly than they are in Jelinek’s text: the case of the underage Gretchen, who Mephisto procures for Faust, and the case of the Austrian child-abuser Josef Fritzl, who shut his daughter away in a cellar for twenty years and had seven children with her.

Jelinek is the classic artist of the text surface; Franz Xaver Kroetz was already the classic of the socially critical dialectical play in the 1970s. For a long time nothing was heard of him; then ten years ago he wrote again for the theatre. Not long after it was revealed that in a restaurant in Saarbrücken a boy named Pascal had been regularly abused and probably murdered, Kroetz presented his Du hast gewackelt. Requiem für ein liebes Kind (i.e., You Wiggled. Requiem for a Sweet Child). The play had lain for years in his desk drawer before the Munich Staatsschauspiel gave it its premiere and Kroetz’s new tone could be heard. A choral-sounding speech of men who play the good uncle and pass off the defilement of the boy’s body as an act of caring.

Jelinek's FaustIn and out was very quickly re-performed; one wishes that Franz Xaver Kroetz’s play will be re-performed and then at the latest join the category of dramas to which the ever more networked Mülheim Festival especially devotes itself: re-performed plays. Since 2012 the festival has been cooperating with the Play Market organized by the Heidelberg Theatre. This means that the Heidelberg Theatre selects three re-performed productions from the current pool of German-language theatre and invites them to the Play Market so as to award one of the productions a Re-Performance Prize.

The honoured production is then invited to Mülheim in the following year. Last year’s winner was the Saarbrücken production of Rebekka Kricheldorf’s Villa Dolorosa. This year it was Die Trilogie der Träumer(i.e., The Trilogy of Dreamers), in which the Konzert Theater Bern shows three early plays by Philipp Löhle on one evening. In addition, for several years there has been an “international return match” in cooperation with the Goethe-Institut. The Mülheim Festival invites productions of previous selections that have been re-performed around the world. As of very recently, these international re-performances have also been shown during the Heidelberg Play Market. This year Luis Ureta’s Chilean production of Löhle’s Das Ding (The Thing) will be brought to Germany.

The selection of Mülheim Theatre Festival 2013: