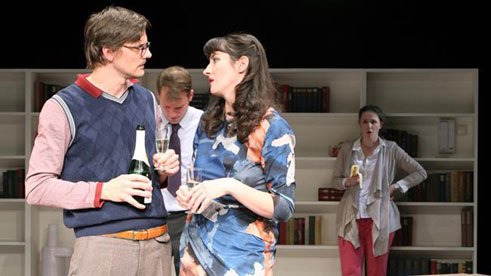 The 2012/2013 season surprised with a variety of outstanding plays and was also otherwise full of eye-openers.

One could take a long time looking for reasons why the theatrical vintage of the past season was so good, but would probably end up only with chance. All the authors who, contrary to the trend to no trend, treated the increasingly common cases of the sexual abuse of wards, certainly didn’t agree to do so in advance. Nor did the young writers who have suddenly vehemently spoken out know anything of each other. Not to mention the three “returnees” who after variously long absences from the stage again presented plays: Dea Loher, Moritz Rinke and Franz Xaver Kroetz. They also knew nothing of each other, but their most recent theatre texts contributed to making the 2012/13 season one of the best in a long time.

Dea Loher, for example, is one of the greats of the dramatic trade, but suddenly disappeared and wrote a novel. After she had done this and treated the violent death of a young man in her Bugatti taucht auf (i.e., Bugatti Surfaces), she turned again straightaway to drama and submitted a classical quartet piece in Am Schwarzen See. Two pairs of parents meet after many years and try to discuss the joint suicide of their children. The premiere at the Deutsche Theater was managed by Loher’s old collaborator, the director Andreas Kriegenburg.

In one point the prose writer and theatre author Loher coincide. Both are concerned with the question of how the survivors deal with the death of a loved one. A contrast to this is Moritz Rinke’s relentlessly accurate and impressive text Wir lieben und wir wissen nichts (i.e., We Love and We Know Nothing) – also a classic four-character play, but quite differently shaded. Rinke, who had been lost to the theatre for much longer than Loher and also wrote a novel, has reported back with a comedy about the abysses of a contemporary partner relationship. The theatre thanked him in its way. After its premier at the Frankfurt Schauspiel, his latest play was re-performed at short intervals in Aachen, Bielefeld and Bern.

Towards another writer the theatre has not been similarly open. In recent years it has enveloped Franz Xaxer Kroetz, the author of the socially critical classical dialectical play, in a silence, although in 2004 he responded very quickly to the cruel case of the abuse of a small boy in a Saarbrücken pub with Du hast gewackelt. Requiem für ein liebes Kind (i.e., You Wiggled. Requiem for a Sweet Child). The play lay for a long time in the desks of various theatres until it was premiered this past season, when a series of playwrights devoted works to the theme of “abuse”, by Anne Lenk at the Munich Residenztheater.

In the 1970s Kroetz had already arrived at the point that Philipp Löhle has reached in recent years. Löhle is now an established author whose sarcastic theatre texts are performed both in and beyond Europe. His latest play, Nullen und Einsen (i.e., Zeros and Ones), is his hitherto most ambitious work: a flirtation with applied stochastics, in the course of which biographies are hopelessly confused and nine characters find themselves repeatedly in new chance constellations. It was premiered at the Mainz Staatsschauspiel by Jan Philipp Gloger.

If Gloger is Löhle’s preferred director, the Kassel State Theatre is Rebekka Kricheldorf’ favoured stage. It was there that her latest play was again premiered: Testosteron (Testosterone), a dark parable of parallel worlds about a person who went forth to learn what fear was. Shirin Khodadian staged the text, playing with set pieces from the world of telenovelas. Rebekka Kricheldorf is now one of the established women playwrights and should welcome the fact that the number of her colleagues has steadily increased since her breakthrough ten years ago. In the 2012/13 season she was joined by three others whose temperaments as writers could not be more different: Katja Brunner, Azar Mortazavi and Marianna Salzmann.

Katja Brunner is another of the writers who has ventured into the mined territory of the abuse of the underaged. In Von den Beinen zu kurz (i.e., Too Short in the Legs), she imagines herself into the mind of a Lolita abused by her father and achieves something that hardly anyone else has previously succeeded in doing: right off, the play, produced by Heike Marianne Götze at the Hanover Schauspiel, won the coveted Mülheim Dramatist’s Prize. If Brunner creates the impression of being a writer who gives herself defencelessly to her subject, Marianna Salzmann seems to be one who writes rather rapidly and tries her hand at all possible play genres and styles. She was the most prolific author of the season. Six of her theatre texts were premiered towards the end of the previous and during the last season: Beg your pardon, Muttermale Fenster Blau (i.e., Birthmarks Window Blue), Kasimir und Karoline (after Horvath), Muttersprache Mameloschn (i.e., Mother Tonue Mameloschn), Fahrräder könnten eine Rolle spielen (i.e., Bicycles Could Play a Role) and Schwimmen lernen (i.e., Learning to Swim). The best constructed one is Muttersprache Mameloschn. Brit Bartkowiak staged the rapid comedy of types in a Jewish women’s household at the Deutsches Theater in Berlin.

There remains Azar Mortazavi, a rather quiet writer, who in Ich wünsch mir eins (i.e., I Want One for Me) presents us with a young German woman with Arabic roots and the longing for a child. Annette Pullen premiered the play at the Osnabrück Theater. Mortazavi’s elegy on the loneliness of a young women in a foreign country rounds off the picture of a theatre season that, with further plays such as Martin Heckmann’s poetic treatise on love Einer und Eine (i.e., One and One) (premiered at the Mannheim National Theatre), Felicia Zellers’s workaholic drama X-Freunde (i.e., X Friends) (premiered at the Frankfurt Schauspiel), John von Düffel’s football legend Alle sechzehn Jahre im Sommer (i.e., Everything Sixteen Years in the Summer) and Nina Büttner’s Else Lasker Schüuler Prize-winning Schafinsel (i.e., Sheep Island) (premiered at the Pfalztheater in Kaiserslautern), was one of the richest of recent years.