Dea Loher
Were I a pump attendant 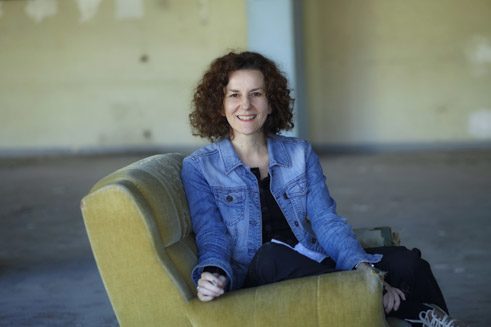 Dea Loher is one of the most performed playwrights in the German language. Her theatre texts are about the neglected, the marginalized, the injured birds of paradise and all the enormities that can lie dormant in everyday life.

Looking at the lives of the lost of this world is Dea Lohers theme since she completed her study of German philology and philosophy at the University of Munich and then enrolled as one of the first in the programme for dramatic writing at the University of the Arts in Berlin. One of her teachers in Berlin was Heiner Müller. An interim year in Brazil between the two periods of study had after-effects and led to the premiers of two remarkable theatre texts. In Unschuld (i.e. Innocence) (2003) and Das Leben auf der Praca Roosevelt (i.e. Life on the Praca Roosevelt) (2004), she presented people that have nothing to lose and wander through life, like a diabetic in Unschuld, with brittle comedy: “Were I a pump attendant, a cigarette would be enough”, says Mrs Sugar, one of the characters who can quite easily imagine ending her own life.

Loher’s most important artistic companion has been the director and set designer Andreas Kriegenburg. He has premiered most of her plays and in the last decade of the old millennium had at his disposal in the ensemble of the Hamburg Thalia Theater the best actors one could be wish for. This was also the time when the theatre author Loher could register two further high points in the premiers of Das letzte Feuer (i.e. The Final Fire) (2008) and Diebe (i.e. Thieves) (2010) and finally entered the circle of the most performed contemporary German writers. Kriegenburg has remained her preferred director, but the team of the Thalia Theater has now moved to the Deutsche Theater in Berlin.

Then Loher disappeared from the theatre scene. She was writing a “major work”, and in 2012 she brought out Bugatti taucht auf (i.e. Bugatti Surfaces), her first novel. That she was not disinclined to the epic genre was already evident in 2005 with her novella Hundskopf (i.e. Dog’s Head). Now in Jordi, the hero of the novel, she presented a man who can also be found in her plays. After a fateful event, he loses his way and wants to change his life. Teenagers have beaten a boy to death; this has so shocked Jordi that he dedicates a “project” to the dead boy. He wants to raise a Bugatti that has been sunken at the bottom of Lake Maggiore for seventy-five years. The reviews of the novel were enthusiastic. We may assume that it will not be Loher’s last.

The desire to give new meaning to a life that has come out of kilter occurs repeatedly in her work. This is also true of her first theatre text after the novel. In Am Schwarzen See (i.e. At Black Lake) (2012), two married couples meet again after many years and circle round the question why their children committed joint suicide and why they, the parents, knew so little about them and still know so little today. In charge of the premier was again Kriegenburg, who set the desperate parents in a monumentally dreary loft and underlaid their loneliness with small gestures of uncertainty and the distortions of pain. Loher’s return to the theatre was with a text that is very different from her plays of the previous decade. It presented no vast panorama of characters, but instead focused on four figures of a chamber drama.

Stranded life projects have always been Loher’s subject, and they are still, for Europe is experiencing a profound transformation. The neo-liberal deregulation of the markets has led to continually new market turbulences and intra-European waves of immigration. One has the impression that Loher’s stage characters too are now to be found where work and money will be redistributed. In her latest play, Gaunerstück (i.e. Rascal Play) (2015, premiered at the Deutsches Theater Berlin), Spanish twins stand for the dream of a better life. Deserted by their father when they were young, little more seems to be in the cards for them than a future as unskilled workers. So they enter into a criminal business with a fallen middle-class jeweller. He proposes to them that they rob him and he collect the insurance. Once again Loher’s characters are not necessarily among the winners in the battle for a market share in life.

Jürgen Berger is a freelance theatre and literary critic for the “Süddeutsche Zeitung”, Berlin “Tageszeitung” and “Theater heute”. Since 2007 he has been a jury member for the Else Lasker Schüler Play Prize, and since 2012 a member of the Selection Committee of the Mülheim Dramatist Prize.