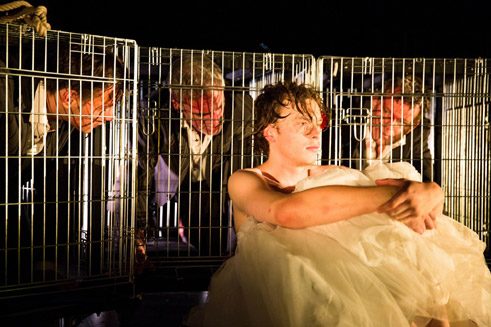 Theatre writers have responded to crises and wars by accentuating the sated middle class’s tendency to wall itself off from the world.

The German-language theatre of the season 2014/2015 has been largely dominated by Elfriede Jelinek. This season saw the premiere of two of her text fields revolving around the currently most pressing political problems: the swelling flow of refugees from war zones and the poor houses of the world, and the nationalistic outbreaks of hatred against foreigners, which resulted, among other things, in the targeted murders carried out by the so-called National Socialist Underground (NSU). Between 2000 and 2006 the right-wing extremist trio of Uwe Mundlos, Uwe Böhnhardt and Beate Zschäpe is alleged to have murdered nine Turkish and Greek small businessmen. Mundlos and Böhnhardt found death by their own hands; since May 2013 the case of Zschäpe is being heard by Munich Higher Regional Court. The accused, however, refuses to utter a word.

In Das schweigende Mädchen (i.e. The Silent Girl) Jelinek treats the silence of Beate Zschäpe, her own helplessness and the barely controllable anger that Zschäpe’s strategic speechlessness evokes. Jelinek does this in more than 200 closely written pages, and it looks as if she were putting the right-wing trio of murderers before her own world court. From this Johan Simons, in one of his last productions as intendant of the Kammerspiele, made a quiet language oratorio. The text and the Munich premiere were among the outstanding events of the season 2014/2015 and show the response of theatre writers to a world sinking into the Babylonian confusion of territorially and religiously motivated crises and wars, orchestrated by terrorism and the flood of refugees.

The premieres of the season 2014/2015 reflect this situation and show how the still rich Central Europeans respond to the new world chaos with their very own attempts at escape. In Homo Empathicus Rebekka Kricheldorf, for example, assembles a community of people purportedly free of conflict and fear. In Göttingen, where Erich Sidler premiered the play as the kick-off of his directorship, we could have supposed we had landed in a drug-induced hippie nirvana beyond greed, envy, mistrust and aggression. In fact, however, Kricheldorf’s dialogical theatre text shows that a community organized according to the rules of political correctness also bears features of totalitarianism.

The desire for a world purified of all racism and sexist emotion is transformed into the nightmare of a walled-off “brave new world” in which the individual wants to be the standard of his own self and determines what is politically correct or incorrect depending on the situation. Kricheldorf’s overstrained globalized people retreat into a sweet, padded dream world, gyrate in euphemistic language games and stand for an affluent middle class that, in the face of world-wide political and social turbulences, wants ultimately only to safeguard its own status quo. An analysis that also applies to Dirk Laucke’s characters in Furcht und Ekel. Das Privatleben glücklicher Leute (i.e. Fear and Loathing. The private Life of Happy People), premiered by Jan Gehler at the end of 2014 at the Stuttgart Schauspiel.

Laucke is concerned with that right-wing nationalist racism which has currently escalated into nation-wide neo-Nazi attacks on refugee hostels. He detects the origins of this increasing re-nazification of German villages and cities not in the mass phenomenon, but rather in the everyday phrases and slips of speech with which pub chavs, middle-class couples and upscale intellectuals want to keep at arm’s length the people from the poverty zones of the world who are making their way towards Central Europe.

This theme took a very special form at the end of season in Oliver Frljić’s provocative Balkan macht frei (i.e. The Balkans Make You Free). The author and director, who lives in Croatia, makes himself and his work in German-language theatre the subject. He shows that a privileged “refugee” such as himself can easily get a work permit in dreamland Germany, but still suffers from being in the theatre scene finally only a token Balkanite. Frljić staged his work at the Munich Residenztheater and in a real-life water boarding scene showed how topical, bitter and painful theatre can be.