Remembering Movement
The Body as a Memory Medium 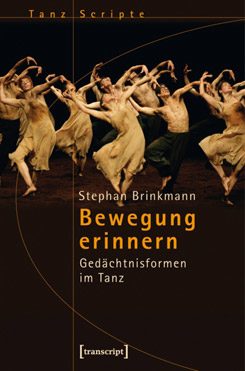 Cover of Stephan Brinkmann's “Bewegung erinnern. Gedächtnisformen im Tanz” (Remembering Movement – Memory Forms in Dance), 2012. Reihe TanzScripte | © transcript Verlag The author teaches Contemporary Dance at Essen’s Folkwang University of the Arts where, after graduating in Theatre Studies, German Philology and Sociology from Cologne University, he completed an additional course in Dance Paedagogy. From 1995 to 2010 he was a member of the Tanztheater Wuppertal Pina Bausch and danced regularly in Bausch’s Rites of Spring to Igor Strawinsky's ballet music Le sacre du printemps. He recorded his experiences in the rehearsals and performances of Bausch’s still riveting choreography from 1975 in diary entries, which he weaves into his meticulously researched and multifaceted investigation. This practice connection gives the book an authentic and very lively quality. At the same time the publication gains a certain topicality 100 years after the première of Sacre by the Ballet Russes in Paris. Finally the book is also a tribute to Pina Bausch whose death in June 2009 marks a significant caesura in the history of German dance theatre.

Brinkmann describes dance as “a memory art”. Dancing Bausch’s Rites of Spring today, he says, is in itself “an act of memory” and “an experience of remembrance”. In the absence of a choreographic notation system, similar to that of a musical score, which has general validity and can be read by everyone, the dancers themselves become the memory carriers and the human body its most important medium. This depository is, however, by no means perfect, all-embracing and un-perishable, something it has in common with all the new technical media. For the dancer’s body ages, and “an old dancer dances quite differently than a young one,” writes Brinkmann. Moreover, the Jooss-Leeder method, which is taught at Folkwang and which Brinkmann describes in detail, does actually demand a certain measure of forgetting in order not to inhibit the creative process, which, according to Joos, is an essential feature of dance.

Bridge between practice and theory

With this book Brinkmann’s aim is to promote the connection of dance to science in its broad sense. In detailed, partly repetitive and overlapping chapters he presents the definitions and research results of various disciplines that in recent years have discovered dance as a form of “memory technique”. They were further encouraged by tests proving that dancers remember movements much more precisely and for a longer time than other test persons. All scientists work with the theory of two different parts of the memory, the natural or internal one and the artificial or external one. The first preserves motoric mechanisms, but also memories, emotions and expertise. This part is therefore more important for dance than the artificial, object-related memory.

It is the so-called cognition science that is most intensively researching the memory of dancers. This interdisciplinary affiliation of German biologists, sports experts and neuroscientists devotes itself to researching the learning and controlling of movement as well as the significance of movement for conception and communication.

A language for that which has no language

In contrast to the natural scientists, the French philosopher Henri Bergson (1859-1941) sees memory not as an achievement of the brain on a physiological basis but as a mental activity. Brinkmann quotes Bergson who wrote in his magnum opus Matter and Memory that movement was “the essence of life”. He describes Bergson as an “art and movement philosopher”. He devotes a whole chapter to Bergson who won the Nobel Prize in 1927 and was the subject of much controversy during his lifetime. Brinkmann sees parallels between his philosophical theories and dance theatre practice. The philosopher Bergson defines dance as “a language for that which has no language”.

Dance theatre - alongside all the freedom of the individual - is also particularly reliant on the “communicative memory”. In contrast to classical ballet its movement language is not encoded by poses and figures. Exchange and encounters with other dancers are essential for passing on and remembering the elements of dance. Older pieces in particular and the reconstruction of earlier choreographies can only be passed on from one generation to the next with the highest possible degree of authenticity by means of talks and joint rehearsals with the choreographer or contemporary witnesses.

Remembrance, says Brinkmann, always functions by means of images and emotions. He gives us a fine example of this in the diary entry following his last performance in Rites of Spring in December 2010. “For the duration of half an hour there was nothing more important, nothing more gratifying, nothing more exhausting than the handful of movements of which the piece consisted. I will always remember them.”