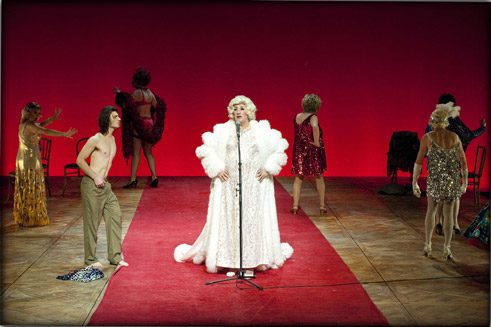 It is a remarkable genre – as free as the visual arts, without the narrow framework of theatre, far from the rules of cinema. Dance film is a niche from which filmmakers since Fred Astaire have been glad to break free.

When asked why he likes using his camera so much, Jirí Kylián, the surrealist among the great choreographers, said: “People always get (their cameras) out when they experience an irretrievable moment. Your child is dancing, so you film her because you know that she will never dance like that again. It is exactly the same with older people. Their bodies change in their final years as fast as children’s bodies do in their first years of life.” Kylián does not love the camera for showing dancers who can repeat their dance anytime but because it shows something ephemeral, as in his latest work, East Shadow (2013), inspired by Samuel Beckett. His two ageing dancers Egon Madsen and Sabine Kupferberg “fade away” on the stage. At the same time, one sees them in the film - a striking portrait of their immortality.

The aspect of immortality could be called an old side-effect, an issue raised by any film, including Alain Platel’s Gardenia, which was released in 2014. Filmmaker Thomas Wallner observed six drag artists, all close to seventy, at the fringes of the dance performance of the same name. It focuses on and interviews the ageing diva Vanessa van Durme. No, they will never again be so young; in ten years, their dreams, worries and lifestyles will be different. Film captures her past of coming out, as if by way of reminder. Yet her dance burns like a firework that goes up in little black clouds.
“Gardenia”, les ballets C de la B / Frank Van Laecke / Alain Platel © Kamiel De Meester (Youtube)

This image of the ephemeral is popular, particularly in dance, which seems to manage without a text book or score and to be less durable than music and words. Does that mean that a separate dance film genre exists? Hardly anyone speaks of theatre or opera films – at best of a “film adaptation”. Even the work of the Vienna-based International Music + Media Centre has not changed that. It has been promoting opera film in particular since the early period of educational television back in 1961. The Centre acts as a lobbying group for marketing films on DVD and for broadcasting opera live in cinemas.

That organisation also founded the annual Dance Screen Festival, the most recent edition of which was hosted by the San Francisco Dance Film Festival. Here, dance is not presented as a conserved stage spectacle, but rather makes more or less great cinema. The same is true of many other dance film festivals, such as Pool, which was founded in Berlin in 2007.

Since the 1930s, when the entrancing films by Fred Astaire and Ginger Rogers were produced, the dance film genre has followed a distinctive dramaturgy consisting of humour, virtuosity and effective surprise. For nearly as long, since director, dancer and film theorist Maya Deren’s works in the 1940s, the genre has also seen itself as experimental film. Whether or not a firework actually does go off beneath Astaire’s dance shoes or the camera becomes a dancer, dance appears to promise great cinema, unlike theatre and musical theatre.

Bollywood without dance is as unthinkable as films like Darren Aronofsky’s Black Swan (2010) or Stephen Daldry's Billy Elliot (2000) are unthinkable without ballet. It is always about a state of emergency, especially in Hollywood. As a movement apparently not subject to norms or normality, dance embodies that state. What is more, choreography guarantees a virtually endless expansion of that enormous movement. OK Go’s music video I Won’t Let You Down, is a breath-taking current example. A one-shot take, it starts by presenting a few Japanese women dancing with umbrellas who become an army of dancers, requiring a camera on an aerial drone to rise to a height of a hundred meters to keep them all in view. Such overwhelming aesthetics are attractive and bring in the cash.
OK Go: „I Won't Let You Down“, Official Video (Youtube)

All the popular coming-of-age films since Dirty Dancing (1987) have also perceptively celebrated dance and its club culture as the place of youth initiation. In the wake of hip-hop – as previously flamenco and salsa – they have stylised dance in all kinds of ways as a great battle between rival gangs. Yet with all their drama and effects, people tend to be reluctant to speak of dance films. While they are dance films, their composition appears to be more closely related to revues and musicals than to contemporary dance.

One has the impression that half of all the dance film productions since the 1980s take place in derelict houses, unwelcoming tunnels or attractive suites. Playing with transience like this, contemporary dance commemorates the subject of loss that comes from the Romantic era and the loss of reliable perception. Dance film plays with its own logic. At best, dance film celebrates the consistent sequence of cause and effect; in less favourable instances, it applies the whole box of tricks of digital image manipulation to its victim, the dancing body.

Between these extremes, there is plenty of room for manoeuvre. An example is Replaced Vision (2014) a dance film made by Spanish filmmaker Lara Rodríguez Cruz, going to the limits of the familiar. This wonderful film essay rigorously reflects on its own means. “We are visual creatures“, a subheading says, while a dancing couple is shown. “Everyone reacts to pictures,” says the film, and, with great precision, it pushes its dancers to the edge of the picture while reproducing the same choreography at ever new optical levels, to the point of overkill. The essay ends with the demand “Stop visual totalitarianism”. The dancers are erased, with only a white picture remaining. Off-camera, Cruz demands finally giving up the eternal concept of transience. Cruz oppressively demonstrates that repetition is a compulsion. It is the little sister of transience.

Arnd Wesemann is an editor of “tanz” magazine and a member of the jury of the POOL Berlin dance festival.