Dance in the Museum
The Dancing Museum 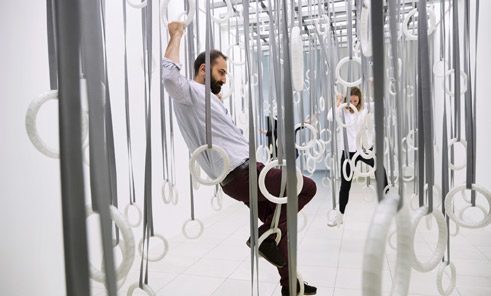 William Forsythe not only gets dancers dancing, but also, in his “Choreographic Objects”, choreographs the viewers’ movements. An exhibition of these objects is being showcased for the first time at MMK Museum für Moderne Kunst in Frankfurt. An interview with Mario Kramer, Head of Collection at the MMK and curator of the exhibition “The Fact of Matter”.

Mr Kramer, how did the exhibition come about?

William Forsythe and I have known each other for 25 years, that is as long as I have been in Frankfurt. I was lucky enough to see nearly everything he has done in this time. In recent years, I followed his Choreographic Objects at other museums. That made me think that the MMK was the right place for such works, and Museum Director Susanne Gaensheimer took the same view. Initial talks about this exhibition took place three years ago, when it was not yet foreseeable that the Forsythe Company would end in 2015. Now, we consider it very important to emphasise that our exhibition is not a farewell but a new beginning. In the end it was a coincidence that it is taking place this year.

What makes dance interesting for your museum?

For some time, we had been looking for works that went in the direction of performance and the visual arts, and there have also been corresponding exhibitions here in recent years, such as the living museum in 2003 with works by Tino Seghal, Tania Bruguera et cetera. We are interested in artists who work performatively. There have been many relationships between the arts at these interfaces since the sixties at the latest. In this area, William Forsythe is a figure par excellence, of course. At the same time it became clear that his exhibited works had to be compatible both with Hans Hollein’s very challenging museum architecture and with the collection, since the intention was for there to be a dialogue between the works.

In the exhibition, the ten objects by Forsythe are related to items from your collection which you have selected jointly for the purpose. What did you hope this dialogue between the works would achieve?

We are exhibiting many works from the sixties which are part of our collective memory and which were also an inspiration to Forsythe, such as early video works by Bruce Nauman and Richard Serra. Forsythe can seamlessly link up with ideas of performance and movement, of choreography, contained in them. Or with Fred Sandback’s Untitled, fine strings that choreograph the exhibition space and guide the way we see. That is precisely what William Forsythe worked on from the foundation of the Forsythe Company, the dissolution of the classical stage. Many of the Choreographic Objects were developed from stage sets, after all, such as the sixty pendulums of Nowhere and Everywhere at the Same Time, except that these spaces are no longer for trained dancers, but for normal museum visitors. In this way, the exhibition goes far beyond passive art reception.

But that means that in the exhibition, two rule systems exist simultaneously, which for me reveal the convention of museums. On the one hand, the items in the collection may not be touched, while on the other, most of Forsythe’s works should be, even have to be touched. How do you deal with that?

That is a challenge, of course. What normally applies is “Touching the figures in the museum is prohibited!” But we master this challenge by means of written instructions and very attentive, well-trained museum attendants. I think it is fantastic that visitors here are given completely different opportunities for experience. At the same time, William Forsythe’s works provide a new perspective on our work. 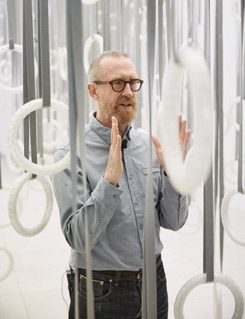 William Forsythe (2015) | Photo: Dominik Mentzos What is your aim with regard to the choreographic objects?

The exhibition is more concerned with choreographing our thinking. For example, it is only in our minds that the instruction “Visitors should pull a line into the space between their hands” is issued. Those are the moments that are of great interest to me.

Other works, however, such as “The Fact of Matter”, from which the exhibition takes its title, or the hanging cube from A Volume, within which it is not Possible for Certain Classes of Action to Arise, are very physical.

Yes. Both these works are on the first floor of the museum, where the theme is very much about mortality. In The Fact of Matter, the idea is for the visitor to move hand over hand through a room, aided only by two hundred rings - that is extremely energy-sapping. The space under the cube in A Volume is only seventy centimetres high. Thus, Forsythe places extreme limits on our range of movement.

So there are subordinate themes on the museum’s three floors?

Yes. The first floor is very hard, and includes Teresa Margolle’s Aire, an installation where the air is humidified using the water used to wash corpses. The work confronts us with a kind of embodiment of a past human life. The second floor has the theme of basic principles. There, we show Forsythe’s famous Solo on video and a video from his Improvisation Technologies. On the third floor, with its daylit rooms, it becomes lighter and brighter; the pendulums are showcased there, for example.

In his “Choreographic Objects”, Forsythe has created a new kind of artwork for which we do not yet have any concepts or analytical instruments.

The concept is twenty years old, but I suspect that it is only now, as a result of the exhibition, that it will manifest itself as an art history term. The best comparison is with the kinetic object, which moves and with which we are familiar from the art of the 1950s, for example in works by by Jean Tinguely. But a choreographic object is somewhat different; while it may have kinetic aspects, like the pendulum, it goes far beyond them. I can only experience the work when I move through it, both conceptually and physically.

Esther Boldt conducted the interview. She is a freelance dance and theatre critic for several publications, including “nachtkritik.de”, “taz” and “tanz Zeitschrift”.