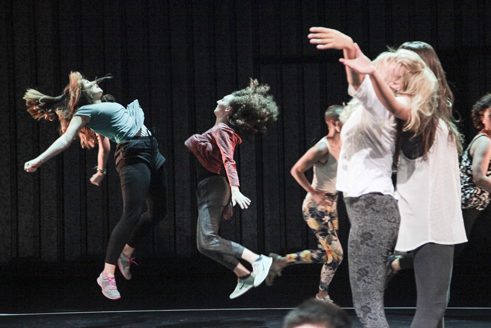 Contemporary dance as part of cultural education in Germany has gained a unique nation-wide new format that places the focus on contemporary dance: the Tanztreffen der Jugend at the Berliner Festspiele.

From a total of 68 entries in 2015, seven groups were selected from seven Länder of the Federal Republic of Germany by a seven-member jury. Most of the players came from dance or ballet schools and theatres; less frequently they came from ordinary schools. The reason for this is no doubt that young people usually seek out extra-curricular facilities in their leisure time; contemporary dance is currently being (further) developed in this sector. Dance for children, in contrast, has established itself as a fixed part of the school curriculum at all-day public-sector schools in some places in Germany. Nation-wide programmes such as Kultur macht stark. Bündnisse für Bildung (i.e. Culture Empowers. Alliances for Education) have strongly promoted participative broad-based dance projects in recent years. Their focus is more on supporting dance as a mass phenomenon, however, with the aim of facilitating the cultural participation of youngsters from backgrounds with limited access to educational opportunities.

What was striking about the selection for the Berliner Treffen was the aesthetic diversity of the performances, the content of which ranged from critical engagement with mythical material and its application to (body) images, for example in Tantalos, tanzsturm by the Staatstheater Mainz, and the subject of (bodily) identity, as in Selbstbaukasten, Selbstbaukasten performed by the tjg.theaterakademie, Dresden, to contact in its various dimensions, as exemplified by Dritte Art by Tanzstudio Danzon in Tübingen. The hip hop ensemble B2B – Back to Basics from tanzhaus nrw in Düsseldorf, which has members of various nationalities, spent a week engaging with the unusual research topic of Japan. What emerged from this artistic engagement was a piece entitled Tabi which was presented by the 16 young people aged between 12 and 20, an artistic interpretation of Japanese culture that combined an adaption of the far-Eastern culture of human motion with contemporary dance and the participants’ own hip hop vocabulary. 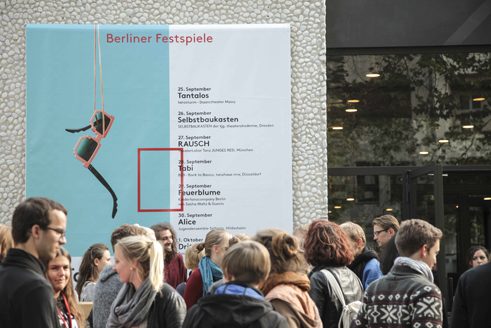 Participants arriving at the house of Berlin Festspiele | © Dave Grossmann Saltazia, a nine-member youth ensemble from Hildesheim, staged Alice. This intricately-constructed 20-minute staging on the theme of personal experiences of fear, desire and limitation got by with hardly any music and displayed polished dance techniques. Eleven young dancers from TanzLabor Junges Resi at Munich’s Residenztheater staged improvisations on motifs from Faust. Their performance culminated in choreographies and personal interpretations of the themes of seduction, ecstasy and impetuosity in Rausch, ia 20-minute production featuring a cold space clearly delimited by light. The children’s dance company Sascha Waltz & Guests presented Feuerblume, in which children between 11 and 13 years of age danced rule-based improvisations within a defined space on various energy states.

All the works shown at the Treffen are piece developments that shine out from the creative interplay between the youngsters’ personal engagement with themes, materials and aesthetics, as well as with their instructing choreographers’ artistic signature. 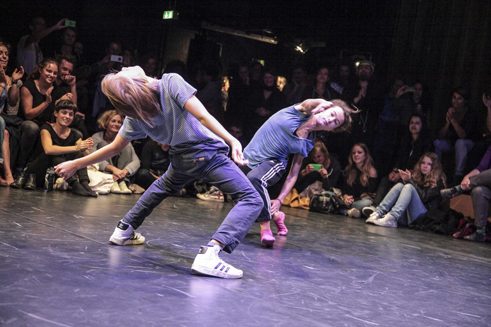 The underlying aim of the training for participants is to promote artistic aspects in dance work. Thus, it fills a gap in a scene largely influenced by pedagogical discourse. The workshop instructor invited to come in 2014, for example, Joke Laureyns of kabinet k (Belgium), is known for her remarkable, profound stage work with children and adults. In 2015, Steve Kirkham of Frantic Assembly (Great Britain) held a practical workshop dealing with the generation of unusual, new movement material based on everyday movements. A ground-breaking special enabling the young participants to encounter the dance experience of outstanding choreographers was the invitation to all the youngsters to spend a day learning a short choreography by Rosas danst Rosas by Belgian choreographer Anne Teresa De Keersmaeker. Instruction was provided and participants were able to create their own dance video for the Rosas danst Rosas project website.

The Tanztreffen in 2015 not only showed a current cross-section of dance productions from and with young people. It was also the expression of a current development which aims to facilitate the formulation of an individual aesthetic form of expression of dance by “non-professionals”. As in developments in theatre in recent years, discovering one’s own aesthetics through working with the “experts of everyday life” remains a highly-charged and interesting question. We can look forward to further developments!