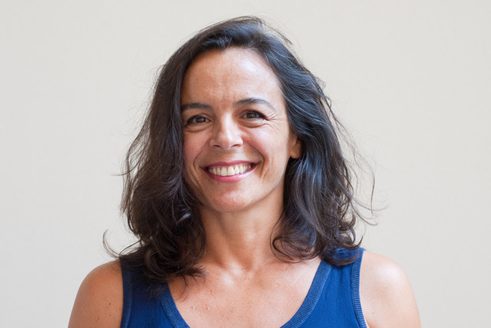 Pina Bausch’s Wuppertaler Tanztheater beckoned Canan Erek from Istanbul to Germany, where she studied dance and choreography. Today she works with young people and realises projects in public space.

When Canan Erek, born 1968 in Istanbul/Turkey, first saw a video recording of the Tanztheater Wuppertal – Café Müller and Le Sacre du printemps – she made the decision to stop studying Journalism in Istanbul. Then followed a conspiratorial journey to Germany, an audition in Essen, training’s begin in October 1987.

Settling into lessons and everyday life at the Essen Institute in the then struggling western region of the Federal Republic was not easy for Canan Erek. She had very little contact to the student body, already quite international at that time, and so after graduating in 1992 she moved to Berlin where the Wall had just fallen and her husband-to-be was already studying. As a student it was possible to obtain a residence permit, hence Erek enrolled as the first student from a non-socialist foreign country for the course in Choreography at the Ernst Busch Academy of Dramatic Arts.

She completed her studies there in 1996 and began her career as a free-lance choreographer. At that time Berlin offered many opportunities but also constant uncertainty. Thus she welcomed the offer to become artistic director of the Leipzig Tanztheater, an ensemble with roots in the amateur dance movement of the GDR. Erek worked there for three years.

Since then she has been active in the sphere of cultural education, at that time quite uncharted territory. “As I have a so-called migration background, I soon got offers,” says Erek laconically. However, at the same time this “Turkey bonus” also blocked her access to many a funding programme. In accordance with the practice of those days, the Goethe-Institut refused to grant her travel expenses as she did not have a German passport – this regulation has since been abolished.

Yet activity in this field does give her a broader social-impact radius. “Working with young people opens up quite different perspectives.” In 2016, together with the Berlin producer Inge Zysk, she initiated PURPLE – International Dance Festival for Young Audiences whose first edition in January 2017 was a great success. Further projects for dance in the public space  - in registry offices or municipal parks – are in the pipeline. “Dance can be so much more,” says Erin. After all, that is precisely why she came to Germany 1987 – in search of dance that differed from that taught in the studios of Ankara and Istanbul.