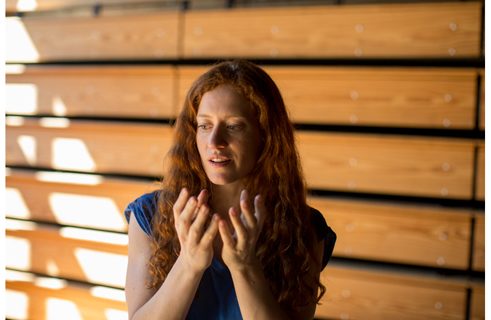 In exile in Argentina, German dance Renate Schottelius was a powerful influence on the Latin American dance scene since 1936. Paula Rosolen came to Germany because of her interest in this artist.

Paula Rosolen’s path to Germany was, one might say, the reverse path of exile. In her dancing lessons in Buenos Aires, Rosolen had encountered the legacy of the German dancer Renate Schottelius, who had fled from Berlin in 1936. In Buenos Aires she had exerted a formative and lasting influence on the Argentinian and Latin American dance scene.

Rosolen’s curiosity was aroused and she began to do research into Renate Schottelius. She devoted her thesis at the University of Giessen, M.A. course in Choreography and Performance, to a documentary choreography: Die Farce der Suche. Ein Solo von und über Renate Schottelius (A Farcical Search: A Solo for and from Renate Schottelius). This premiered in 2010 and was the launching pad for Paula Rosolen’s choreographic career that kept her on the move between Germany, Europe and Argentina.

Since then, while continuing with documentary work, she has also explored the genre musical (Libretto, 2012), the role and status of the répétiteur (Piano Men, 2013), commercial sports gymnastics  (Aerobics! A Ballet in Three Acts, 2015) and – as the result of a three-month Villa-Kamogawa scholarship in Kyoto – Japanese puppetry (Puppets, 2016).

Constant movement through spaces, places and history has become, as it were, the foundation of her artistic work. Leading such a restless life is the price that contemporary artists often have to pay  - no matter where they were born.