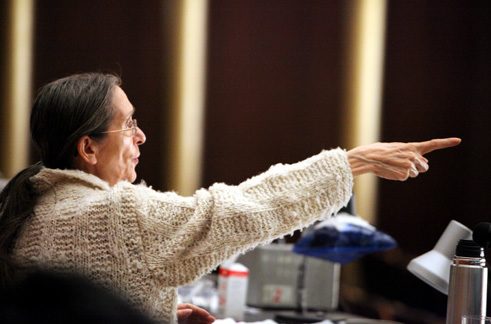 Superficially one might think of Pina Bausch as unvarying and place-bound. But in her art, interculturalism was at the heart of her work in dance more than almost anyone before her.

One could actually describe Pina Bausch’s (1940–2009) journey through life as unspectacular: she was born in Solingen and, apart from a working period in the USA between 1959 and 1961, she was at home in the Ruhr region until her death in 2009, with important stages in Essen, where she studied at the Folkwang Academy and Wuppertal, where she took over the dance department of the municipal theatres in 1973.

And yet she was to become the epitome of cosmopolitanism – and not only because the members of her ensemble, the Tanztheater Wuppertal, came from all parts of the world, but also because of her principle of the journey. From the 1980s on, she laid the foundation for most of her pieces in itinerancy: during extensive research stays in countries, cities and places, she and her company would absorb specific and local elements in order to transform them choreographically back in Wuppertal.

Legendary pieces such as Palermo, Palermo (1989), Masurca Fogo (1998) and Nefés (2003) were the result – respectively in Sicily, Portugal and Turkey. Admittedly, there was some criticism of these works as “postcard art”. But global travel fever had gripped the Tanztheater, and Bausch travelled too. It would be no easy task to determine how many guest performances the Tanztheater Wuppertal has given.

Its effect, however, is clearly definable: the company’s worldwide presence has perhaps made the Tanztheater one of the first global products from the sphere of stagecraft – esteemed, loved and celebrated in rare transcultural unanimity, honoured with high-ranking prizes from Japan, the USA and from all over Europe. One could say that Pina Bausch succeeded most spectacularly in transcending migration with artistic means – in the name of the Tanztheater.

Dance is movement – and movement over borders also shapes dance. For about 300 years now, travel and migration have had a strong influence on an increasingly globalised dance scene. Our portrait series shows: cultural exchange across and beyond all borders and limitations gives dancers impulses for creative work and enlivens their art.