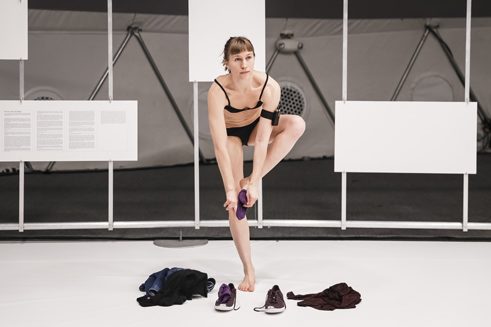 Denmark, Belgium, Holland, France, Germany – unlike many other choreographers Mette Ingvartsen’s moves from one central workplace to the next covered no great distances. But there were many – very many, in fact.

Danish-born Ingvartsen studied dance and choreography at the renowned P.A.R.T.S school in Brussels. There she developed her first choreographies, among them in 2003 the trio Manual Focus, in which three young dancers wore masks depicting old men’s faces on the back of their heads. The juxtaposing of contrasting elements such as young and old, female and male in one body can be seen as the programmatic prelude to Mette Ingvartsen’s artistic development, together with the YES-Manifesto from 2004 in which the rookie choreographer reflected and varied Yvonne Rainer’s famous NO-Manifesto. Whereas the American choreographer as a representative of post-modern dance said “NO” to spectacle, virtuosity and magic, Mette Ingvartsen’s “YES” to “conceptual experiences, emotions and sensitivities” already indicates the foundations of her future work: themes such as nature and artificiality, sexuality and body politics as well as the connection between intimate and social life.

In these projects Mette Ingvartsen always works not only at the varying places of her various coproduction partners, but also in series – whereby the respective themes are enhanced and vary, in fact even migrate from one production to the next. From 2009 to 2012, the choreographer addressed artificial nature: in evaporated landscapes she created natural-seeming landscapes from foam and light, in The Artificial Nature Project she exposed her performers to storms of golden confetti – a glittering allegory for the age of the anthropocene, for those artificially produced changes of nature with which people are confronted today.

In 2014 a new cycle was launched: The Red Pieces addresses the boundary between private and public life. Here Mette Ingvartsen puts the focus of her artistic investigation on the (naked) human body; in 69 Positions various body concepts are explored in the nude, and in 7 Pleasures twelve mostly naked performers experiment with various ways of generating pleasure – whereby in both pieces the border between the human and non-human world, between person and object is once again crossed.

Significantly, in her current piece to come (extended) at the festival “steirischen Herbst 2017” she goes far back into the past and connects up to To come, the piece created in 2005. To come (extended) increases the original number of five performers to fifteen – and thus, according to Mette Ingvartsen, takes the question of human sexuality from the small group into the societal sphere. In another respect, too, 2017 is an important year for the Danish choreographer: after three years as artist in residence at Brussels’ Kaaitheater, she is to join the artistic team of the Berliner Volksbühne under Chris Dercon. It is quite clear, however, that this will certainly not inhibit her spatial migration from place to place, nor her artistic migration from theme to theme.

Elisabeth Nehring has been working since 1999 as a freelance journalist and critic for “Deutschlandfunk Kultur”, “Deutschlandfunk”, “WDR” and other radio stations, print media and trade magazines. Her focus is on live reports, radio features and reportages on cultural, political and cultural-political topics, including reports on dance and performance festivals all over the world (particularly Eastern Europe and the Middle East). She also works as a dance dramaturge and presenter of cultural-political topics.

Dance is movement – and movement over borders also shapes dance. For about 300 years now, travel and migration have had a strong influence on an increasingly globalised dance scene. Our portrait series shows: cultural exchange across and beyond all borders and limitations gives dancers impulses for creative work and enlivens their art.