Theatre must advertise. A distinctive, unique corporate identity (CI) is mandatory for the logos, fanfolds, programmes and seasonal programmes that make a theatre into a brand. Every directorship must have its own colour, special graphics, typography and photography. Ingrid Trobitz, Head of the Press Department at the Stuttgart Schauspiel, has experienced three directorships and three very different CIs.

In the last twenty years Stuttgart theatre colours have changed from red to green to black-and-white. Ingrid Trobitz has worked at the Stuttgart Schauspiel for fifteen years. Currently she is Head of the Press Department. She has sometimes played a greater, sometimes a lesser, part in the theatre’s public presentation of itself. But she has always worked with conveying content: “to convey the content and aesthetics of concepts to the public – that’s what I understand as press and public relations”.

Friedrich Schirmer fetched Trobitz to Stuttgart, where he was intendant for twelve years, from 1993 to 2005. Schirmer had the graphic artist Frieder Grindler design the top left Red Corner that makes every publications of the theatre immediately recognizable. And also provides scope for artistic design, from which the programmes booklets benefit.

Encouraged by the uproar

Trobitz’s second Stuttgart intendant, Hasko Weber, came from Dresden and remained for eight years, from 2005 to 2013. Intendant Weber, chief dramaturge Jörg Bochow, head of the press department Ingriod Trobitz and the Stuttgart-based agency strichpunkt together developed the new theatre look. They hit upon the double meaning of “Faust” (in German, both the name of the legendary and literary figure and the word for “fist”). Goethe’s Faust I opened the first season, and with his Faust21 the director Volker Lösch set Goethe’s Faust II in the centre of the programme. The new logo, a clenched fist against a glowing green background, stirred up all Stuttgart: “Now one of those Easterners has come here and started with Communism, with a worker’s fist!”

Weber, Bochow and Trobitz felt encouraged by the uproar. Actually, they wanted to change the logo depending on the season’s motto. But the fist remained clenched for eight years and many of its erstwhile opponents have now grown fond of it. “Actually nothing better can happen”, she says, “than that everyone talks and debates about an aesthetic design.” For its clear design of the logo and artistic styling of the programme booklets, the agency strichpunkt has won several prizes, including the red dot award and Corporate Design Award. 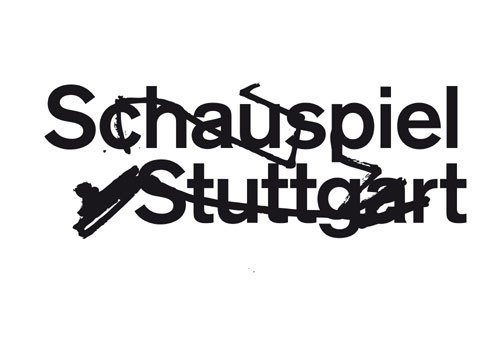 Could this be topped? Armin Petras, who has been Stuttgart’s the new intendant since 2013, decided to collaborate with an artists group from Leipzig, Spector Bureau, and had it develop a design for his theme, tracking. Spector deliberately refrained from delivering a clear logo such as the fist or the red corner. The recently re-designed theatre put Spector in mind of a cave, and so it came up with cave paintings, doodles and, as a logo, an “S” with a hand axe.

The Stone Age doodles seemed so cryptic that the new CI had to be extensively explained in public presentations and flyers. And gradually changed. Trobitz: “Because of the responses to the black-and-white design of the first months, we decided to move to a more vivid one with more colour. Further development is quite along Armin Petras’s lines, because for him theatre is something extremely alive, something that remains in movement and constantly evolves”.

After the first beginnings of a theatre homepage towards the end of Schirmer’s directorship, in 2005 Hasko Weber jumped fully into the Internet, Facebook and of course a daily updated homepage. Particularly important: theatre-goers could now order tickets online. Ingrid Trobitz: “Under Armin Petras, we now have a staff member especially for online communication and social media. Ninety per cent of her job consists in maintaining our homepage, filling it with content, responding to letters from our public, answering tweets, making posting on Facebook and thinking up programme-related social media actions”.

There is also theatre you can touch. Under Weber diverse articles were available in typical Stuttgart green: T-shirts, bags and, especially popular, green umbrellas. Petras and his marketing director Meike Giebeler have gone one step further and combined merchandising with social engagement. Recycled bicycles in black-and-white look are to be auctioned and the proceeds go to sending other bicycles to Africa. The bags made of old flags and banners sewn by women in prison and produced by the small company lemonfish are already a hit.

Creativity on all channels, not only on the stage. For the booklet presenting photos of all the ensemble’s actors in the 2008/2009 season, Trobitz had a free hand: “In fourteen days, I had to find 40 places or 40 actors, and each photo had to tell a story. We were on the autobahn with a piano, did a photo shoot at the harbour, in a taxi, in a hotel, and at six o’clock in the morning on the Neckar Bridge: it was the most beautiful shoot it’s ever been my good fortune to accompany”.

Now creativity will again be needed: Trobitz has been appointed Andreas Beck’s new communication director in Basel and will be changing city. How will she begin? “I’ll be looking for something distinctive that has to do with the theatre’s programme and the city. And I’ll approach agencies in Basel that I think specifically fit together with us and want to become engaged with where we are artistically. For me the best thing about a change of directorships and the related preparations is that I can begin to think quite freely again.”

Ulrike Kahle-Steinweh is a freelance film writer and works for various broadcasters, including SWR, NDR and BR. She is also a freelance theatre critic for “Theater heute” and “Der Tagesspiegel”. From 1999 to 2001 and from 2011 to 2013 she was a jury member of the Berlin Theatre Meeting.