Theatre of the Welt 2014
The Theatre World in Mannheim 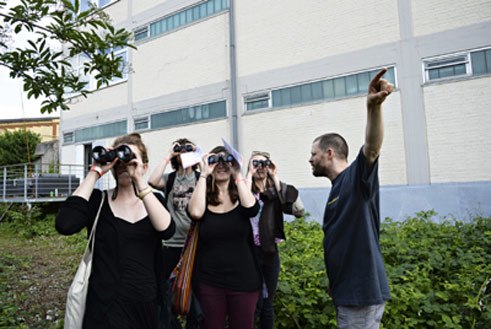 Every three years the Festival invites artists from theatre, dance and performance from all over the world to a different German theatre. In 2014, together with the invited artists, curator Matthias Lilienthal explored the “city of squares”, Mannheim.

Theatre of the World – the name of the festival awakens great expectations. A group of students from Erlangen expected to see experimental and radical performances, which demonstrate previously unknown approaches. In addition, the young theatre scholars hoped to see productions from other cultures and on new topics. On the spot, the camp whetted the appetite for a further experience: the experience of community, of coming into conversation and exchanging ideas with festival visitors from all around the world. In the Camp, pitched directly in front of the Mannheim National Theatre, visitors could sleep in their own sleeping bags and at little cost. 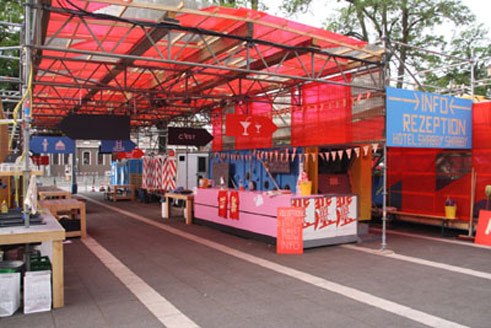 Camp | © Andreas Donders Matthias Lilienthal, the curator of this year’s festival, distanced himself in advance from any the promise of exotic themes. He said it was rather awkward to appear abroad as the curator of the Theatre of the World. In a performance landscape that increasingly works within international contexts, he was working more with the encounter of international artists and the local realities of the “city of squares”, Mannheim. [Editor’s note: The historical Old Town of Mannheim is laid out in city blocks; hence the nickname “city of squares”.] “Seeing your own reality as an alien world”, Lilienthal said, would take the place of the unknown and the exotic. In addition to international greats such as Philippe Quesne and Anna Teresa De Keersmaeker, the programme included familiar friends such as the Berlin theatre Hebbel am Ufer, the Gob Squad and Peaches. And alongside invited productions were new productions and works such as the urban space projects X-Firmen and Hotel Shabbyshabby.

A night next to Schiller – “Hotel Shabbyshabby” 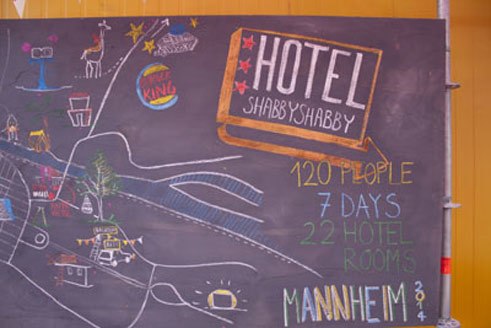 Hotel Shabbyshabby | © Stefanie Heublein Even before the start of the festival, 120 students from various European countries travelled to Mannheim to realise designs for 22 hotel rooms in public spaces in the city for the project Hotel Shabbyshabby. The team had won the festival’s Live Architecture Competition. Under the project management of raumlaborberlin, the task was to create a place in which you could spend the night comfortably yet eventfully. The budget for materials was a maximum of 250 euros and the building materials had to be, as far as possible, recycled or hired. In addition to the festival guests, Mannheim citizens were expressly invited to gain a new angle on their own city by having an overnight stay in one of the Shabbyshabbys. Equipped with flashlight, emergency phone number and the key for the nearest mobile loo, you could seek a room for the night. Some of the rooms were highly noticeable on the deck of a parking garage or in the middle of a central square of the city – for instance, in a construction consisting of used-glass containers. Climbing out of one of these Shabbyshabbys in the morning in your sleeping clothes, you could be assured of the surprised and curious glances of passers-by. 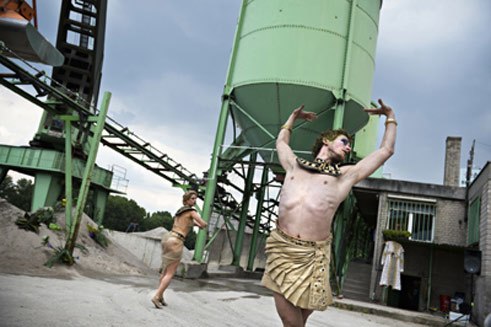 „X-Firmen“ | © Christian Kleiner Another local focus was set by the three tours designed by X-Firmen. Participants were divided into groups of four and sent on unfamiliar paths through the squares of the city centre, the industrial road at the city harbour and the buildings of the software producer SAP in Walldorf. There the participants found the most diverse, ten-minute situations. International artists developed their view of local work worlds and designed scenes in bridal fashion shops, at scrap dealers and at the Mannheim Arbeiterstrich (literally: work line). On the way to the latter station, an audio track in the car informed participants of what it means to seek work on the Arbeiterstrich. Once arrived, you saw two day labourers painting a line on the ground. One drew the line, the other removed it again, and this always in a circle. Julian Hetzel, who designed this station, paid the two labourers the currently discussed minimum wage.

Students from around the world – Performing Arts Campus

At the camp before the Mannheim National Theatre, students and guests could find budget accommodations during the festival. One visitor jokingly compared the construction of steel, wood and plastic in which tents were pitched on two levels, to the tent cities of the Occupy movement. With an open-air sitting-room, bathing court and tiny sauna, the camp guaranteed even a modicum of comfort.

“Encounter” was the declared goal of the Performing Arts Campus, to which students from various universities in Germany, Switzerland, the United States, Poland and Israel were invited. Together the budding theatre scholars, directors, dramaturges, scenographers and architects attended the performances and supporting programmes of the festival. In talks and workshops with teachers and theatre makers, they exchanged views on what they had seen and their own ideas.

If Frie Leysen, festival director in 2010, captioned her Theatre of the World programme with the keyword “Change of Perspective” and focussed on the question of understanding and misunderstanding, what made the 2014 edition of the festival special were the international encounters of young theatre enthusiasts from around the world in and with Mannheim.

23 May to 8 June 2014 in Mannheim.
The 13th edition of festival of the International Theatre Institute (ITI) took place in 2014 and was hosted by the Mannheim National Theatre and sponsored by the City of Mannheim, the Baden-Württemberg Foundation and the Federal Government Commissioner for Culture and Media.

Stefanie Heublein works as a lecturer in theatre studies at the University of Erlangen. In addition to writing smaller journalistic pieces, she has gained experience in dramaturgy in theatre and radio plays, and in various areas of festival organization. She is currently a trainee at the Goethe-Institut in the Department of Theatre/Dance.