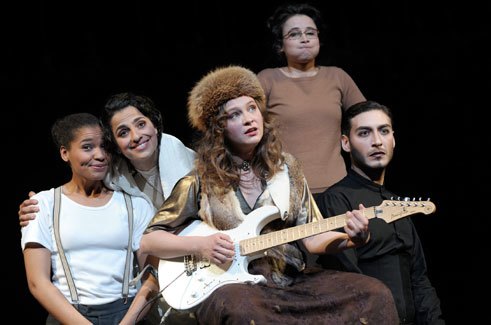 The choice of the Berlin Maxim Gorki Theatre as “Theatre of the Year” came as no surprise – and was a clear one: 15 of the 44 theatre critics surveyed by the journal “Theater heute” opted for the stage led since the beginning of the season 2013/2014 by Shermin Langhoff and Jens Hillje, the smallest of Berlin’s state theatres.

The choice honoured the individual productions in which the Gorki directors Yael Ronen, Nurkan Erpulat, Falk Richter and Havan Savas Mican examined questions of cultural, ethnic and sexual identity from the most diverse perspectives in the first season of the leading duo as much as it did the theatre itself as a social site. And it honoured a fantastic young ensemble including such powerful actresses and actors as Anastasia Gubereva, Taner Sahintürk and Dimitrij Schaad, who was chosen in the same survey as Young Actor of the Year.

That many of the actors have Turkish, Russian or Serbian parents means simply that they have additional registers at their disposal. The Gorki artists are a little too smart and sophisticated, however, to parade this or even to define themselves in these terms – perhaps because they are a bit further along than other parts of the theatre scene in the development of a globalized post-national consciousness. “I come from another country – okay”, says, for instance, The Moldavian-born Gorki actress Marina Frenk. “But at my audition I didn’t try to play the foreigner bonus.” After all, Frenk’s profession is that of an actress, and not of an actress who plays foreigners. Within the shortest space of time, Langhoff and Hillje have succeeded in establishing their theatre as a spirited and vigorous discussion platform, party location and instrument of political intervention, gaining a new, young audience and giving the Gorki a distinctive profile.

Enjoyment of art and political stance

This profile has been shaped as much by an appeal for a more humane refugee policy initiated by Langhoff and signed by the most important theatre people in the country, or discussions with, for example, the prominent critic of capitalism Jean Ziegler, as it has by a “post-patriotic song recital” bearing the ironic title Not a Nice Place. The Maxim Gorki Theatre is much more than the sum of its sometimes more, sometimes less successful productions, and it is assuredly not a place that is exclusively about the enjoyment of art. This is part of its attraction. The theatre stands for a quite self-confident, feisty and essentially political stance, and for the awareness that taking notice of immigrant society in the Federal Republic in the still fairly homogenous German theatre scene was long overdue. Thus the success of the Gorki Theatre stands not only for what can be seen on stage, but also for the signal of a greater opening of the theatre to material, artists and classes of spectators which the theatre of the majority society tends to marginalise or reduce to clichés.

Although it was Langhoff herself who brought the label “post-migrant theatre” into circulation at her previous off-theatre, the Ballhaus Naunynstraße in Berlin-Kreuzberg, the range of topics covered by the Gorki Theatre has long been expanded and refined. Hakan Savas Mican’s production of the Fassbinder film, Fear Eats the Soul, very clearly and forcefully adapted for the stage, presented a previous artistic confrontation with labour migration in Germany, and stands next to Falk Richter’s angry gay agitprop and Pop piece, Small Town Boy. Nurkan Erpulat’s interpretation of Chekhov’s Cherry Orchard, in which the social climber and businessman Lopachin is played by Taner Sahintürk as a German-Turk of the second immigrant generation, tells of other conflicts than the research project Common Ground of the Israeli director Yeal Ronen, who asks about the traces the Yugoslavian civil war of the 1990s left in the biographies of the children of the former perpetrators and victims. What connects these artistically very different works is, in addition to the direct and unadorned narrative, their common insistence.

A certain urgency, readily coupled with humour, is a hallmark of the Gorki style. The confrontation with identity patterns and conflicts, with difference and issues of belonging, outsider perspectives and social exclusion, is here not simply appealing theatre material; it is rather vice versa. The theatre is used as a medium in which these questions can be treated with sufficient complexity – or now and then also with deliberate polemic and simplification, as in Falk Richter’s Small Town Boy. This is the decisive change of perspective that drives the Gorki Theatre: not the institution of high culture uses immigrants and their broken biographies as suppliers of material, but rather actors, directors and writers want to tell of biographies and lives beyond the readily comprehensible range of the majority society. This all goes to shaping a kind of theatre in which issues of cultural affiliation are played out under somewhat different aspects and with different assumptions, and also with a different harshness and anger, than at other stages.

A normative, tacitly presupposed concept of normality, whether a German, a heterosexual or a good middle-class normality, is casually and constantly reduced to absurdity; what is elsewhere assumed to be the normal case is here only one of many possibilities. Abridged attributions using slogans such as multiculturalism or post-migrant theatre fail to capture the artistic-political practice of the Gorki Theatre. They make it seem as if proponents of a narrow-minded majority society want to protect their own notions of normality by so patronisingly and unenlightenedly reducing the Gorki to something exotic. As long as this remains so, the political-aesthetic programme of the Maxim Gorki Theatre will lose nothing of its potential to irritate, its emancipatory force and its necessity.

Peter Laudenbach is the Berlin theatre critic for the “Süddeutsche Zeitung” and a staff writer for the business magazine brand eins. He works as a freelance writer for various publications, including the “Tagesspiegel”, “Theater heute” and “Tip”.