The NSU Murders and Trial
Productions at the abyss 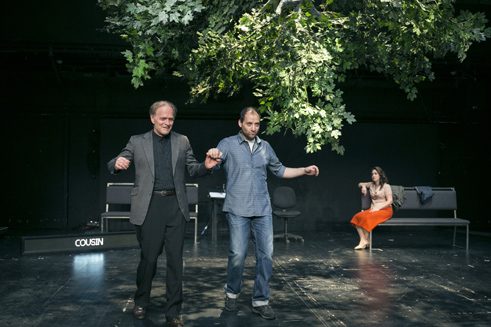 For years, right-wing extremists committed murders in Germany, undetected. Instead, the victims became the suspects. Now not only the justice system but also many theatres are trying to deal with this horror scenario. A survey of the plays about the NSU murders and trial.

It is one of the most depressing recent scandals in the Federal Republic: between 2000 and 2007, three underground neo-Nazis committed ten cold-blooded racist murders on eight small businessmen of Turkish extraction, one Greek and one German policewoman while escaping arrest because the investigating authorities rashly ruled out a right-wing background to the crimes. Investigations into the right-wing milieu, where quite a number of clues left by the submerged trio of the self-proclaimed National Socialist Underground (NSU) could have been found, were stubbornly neglected. Instead, family members of the victims were interrogated, indirectly accused and otherwise left in a situation of intolerable public defamation. The press reported the crimes under the contemptuous catchphrase <i>Kebab Murders</i> (Döner-Morde), which, although chosen the Non-Word of the Year, could be banished from usage only with effort.

The series of murders was solved only in 2011 as a result of the double suicide of the two suspected main culprits, Uwe Böhnhardt and Uwe Mundlos, after a failed bank robbery and the exploding of their shared flat by the third member of the group, Beate Zschäpe, who then turned herself in to the police. Since May 2013, she has been standing trial in Munich – and remaining silent. A verdict is not in sight. The trial drags on through dogged hearings with henchmen from the right-wing scene, who were at the same time often serving as undercover informants for the Federal Office for the Protection of the Constitution, and yet who now claim to remember nothing. The Munich Higher Regional Court has been working meticulously to throw light at least now on the shadowy criminal existence of the NSU. Whether it will succeed in this, however, has become more and more doubtful.

By contrast, it has been clear from the start that the entire monstrous story, from the first murders to the trial, is pervaded by stagings whose authors cannot always be made out at first glance. There are the enigmatic murders themselves, and the video proclaiming responsibility that was put into circulation immediately before Zschäpe’s arrest, with its cynical use of the Pink Panther. There is the innocuous disguise of the culprits in the form of nice neighbours and camping enthusiasts, and the increasingly opaque role of the undercover agents in the right-wing scene. And finally the trial is itself theatre, a performance in which German law is struggling to prove its credibility and we cannot be certain whom is being staged by whom.

It therefore seems only logical that the material has already found its reflection on the stage relatively shortly after becoming known. The theatre has confronted the culprits’ perfidious demonstration of power with fictional, documentary and discursive strategies, and thus added a significant dimension to the media debates about the still underestimated extent of right-wing terror.

It all started in June 2013 with the director Mareike Mikat’s project Unter Drei (i.e. We Three), a co-production of the Berlin Ballhaus Ost, the Brunswick Staatstheater and the Stuttgart theatre Rampe based on the play <i>Weißes Mäuschen, warme Pistole</i> (i.e. White Mouse, Warm Gun) by Olivia Wenzel, with texts by Sophie Nikolitsch. Sometimes decidedly speculative, Mikat risks insights into the culprits’ way of thinking and living, and has the victims draw up a balance from the Beyond on their brutally cancelled lives. She also addresses the scabrous attraction of the subject, with which she has the culprits flirt: “What a brilliant dramaturgy” proclaims a “Beate alone at home”. “We’ll provide the German theatre, the German stage and cultural scene, with work for years to come, and will they show themselves grateful? Probably not. My sole consolation is that they can only fail with us. Only make themselves ridiculous.” Here the danger that every play about the NSU risks – to let itself be used by contributing to the fascination of crime – is taken by the horns.

In Der weiße Wolf (i.e. The White Wolf), a work commissioned for the Frankfurt Schauspiel and which was premiered there in February 2014 by Christoph Mehler, Lothar Kittstein ventures further into the terrain of fiction. He projects tawdry scenes of an unholy ménage-à-trois, crude splatter fantasies about the sex and inner life of the outlaw trio, which intoxicates itself on a kind of right-wing revenge poetry. Reference to the NSU, which is claimed in the season schedule, seems rather remote; at least a reflective meta-level is not apparent in the text.

Jan-Christoph Gockel and his dramaturge Konstantin Küspert, on the other hand, compile facts and historical references that go far beyond the NSU’s sphere of action in their play Rechtsmaterial (i.e. Legal Materials), which was premiered under Gockel’s direction at the Karlsruhe Staatstheater. Starting with the cult around Albert Leo Schlageter, who carried out attacks against the French occupying forces in the Ruhr area in the 1920s, was executed for this in 1923 and later glorified by the Nazis as the first soldier of the Third Reich, the team of authors dig deep into the background of right-wing intellectual programmes. Thus the Zwickau terror cell appears as part of a long tradition of National Socialist propaganda, whose German roots may already be found in the Weimar Republic.

In her documentary project Urteile (i.e. Verdicts), which was premièred in April 2014 at the Munich Residenztheater, Christine Umpfenbach focuses not on the culprits but the victims: in the course of extensive research, she spoke above all with the families and friends of the victims, created a basis of trust, asked and listened with openness. From the protocols of many conversations with family members, friends, work colleagues and people associated with the investigations arose a text collage in collaboration with the playwright Azar Mortazavi, which proceeding from the lives of the two NSU victims murdered in Munich, Habil Kılıç and Theodoros Boulgarides, shows the systematic destruction of two hitherto positive stories of integration. The murders were only the beginning; the rest was done, according to the project, by the authorities, the media and the German public, and proves this severe thesis altogether reasonably with documented statements. In the performance the various speakers are not so much played as vicariously represented by three actors. Documentary theatre here works as a filter that separates the emotional information from the immediate biographical identity, protects the victims while concealing nothing, and makes a space available in which the viewer can share in their experiences without voyeurism.

Likewise based on direct encounters with the people concerned is Die Lücke – Ein Stück Keupstraße (i.e. The Gap – A piece of Keupstraße) by Nuran David Calis, which has been at the Cologne Schauspiel since June 2014. Beginning with the NSU’s nail bomb attack on Turkish shops in the Keupstraße in Cologne, the author and director explores the cultural divisions that were torn open by the explosion and subsequent investigations. Live every evening, three German actors face three Turkish residents who tell of their experiences.

Of silence and speech

Das schweigende Mädchen (i.e. The Silent Girl) by Elfriede Jelinek, premièred in September 2014 under the direction of Johan Simons at the Munich Kammerspiele, may be looked upon as the provisional closure of the theatre’s response to the NSU. In her as always overwhelming, 200 page text, Jelinek zeros in on the blind spots in German self-understanding. Germany, the sport, export and expert power, is at the same time the country that has a built-in “insulating protection”, so that “you hear and see nothing and no heat is lost. And so that you aren’t robbed, aren’t exploited by people it doesn’t know; so that it can protect its murderers, which it at least does know, ten years long; so that it hears and sees nothing thanks to the insulating protection, this fine country”.

And then there is this woman whose voice we don’t know, not a victim but a culprit, an arsonist and perhaps even an instigator of all the methodical murdering, a figure that clearly stands athwart the Jelinekian universe because her chosen silence is a gesture not of powerlessness but of dominance. “But the girl is silent. She is powerful because she is silent. She is silent because she has power”, as it reads on the final page of the complete text; while the handy shortened 40 page stage version by Tobias Staab confines itself to a matter-of-fact juxtaposition: “I speak; the girl doesn’t speak”.

Jelinek parries Zschäpe’s attempt to use her silence to stage herself as an icon of aloof superiority with a barrage of harsh accusations and self-accusations collaged from trial protocols, legal jargon, philosophical quotations and biblical sermons. The mixture generates a torrential vortex of meanings that hot-wires the madness of Christian and racist doctrines of salvation and brings about a sacral and then again dire fatal nexus from the fragments of banality. Groaning, the theatre here takes up the challenges to confront the staged crime with a counter staging of language.

And yet the last words have still not been spoken, either on stage or in the courtroom.

Silvia Stammen lives in Munich and is a freelance theatre critic who writes for various publications, including the journal “Theater heute” and the “NZZ”. From 2005 to 2007, she was a member of the selection committee for the Mülheim Plays.