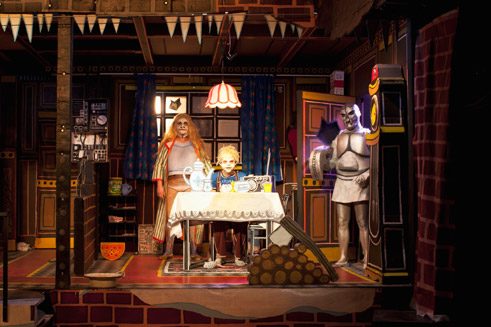 Our feeling of time sequences is malleable. If we are bored by a play, we feel minutes to be hours. But when is theatre boring? Plenty of action is no guarantee of entertainment. Fast-paced and briskly produced theatre can be weary and wearying. Productions that take time, on the other hand, can become true events.

There are those theatre evenings that convey a very different sense of time. They play with time, expand it and develop their own undertow. Something unfolds on stage and over several hours you have the additional experience of forming a close-knit community with the other members of the audience. This alone can be an event, as if a reading circle were absorbed in a fascinating novel. One of the first milestones of such a form of theatre, which expands epically and develops regardless of the lapsing time, was a project in ancient Greek drama realized in 1980 by Peter Stein.

For more than a year, the intendant of the Berlin Schaubühne am Halleschen Ufer, together with his actors, researched and prepared a production of all three parts of Aeschylus’ Oresteia. The audience then sat for nine hours, listening to Stein’s prose translation of the Atreus trilogy: Agamemnon, The Libation Bearers and The Eumenides. There were two longer breaks and a meal of soup, and time itself became an object of interest in theatre space.

Right at the beginning of the trilogy, a guard sits on the roof of the royal palace of Mycenae and waits for the message announcing the victory of the Greek army over Troy. The production let the audience feel the guard’s waiting. Seconds dribble away. It was as if the audience’s perception were switched into slow-motion. If today we look back on the following thirty years and ask which visual and audio marathons stand out, we realise it was always productions of great literature that were stretched on the rack of time perception.

ZTwelve years after Stein’s Oresteia, we could see, on the basis of two aesthetically fundamentally different productions of a classic work, how very different directors treat the narrative time inherent in theatre texts. In early 1992, the intendant of the Munich Kammerspiele, Dieter Dorn, allowed himself nearly six hours for his staging of King Lear. Frank Castorf, then freshly chosen intendant of the Berlin Volksbühne, brought off Shakespeare’s drama about the homeless king in half the time. And yet, according to the theatre critic Benjamin Henrichs in the weekly newspaper DIE ZEIT, the audience left Munich Kammerspiele exhilarated, whereas the Lear of the Volksbühne was as stifling as a “leaden night”.

At the mercy of time

In his relatively short Lear staging, Frank Castorf evidently failed to make the audience into contemporaries oblivious of time. Some years later he succeeded all the more with adaptations of great works of world literature. In 1999 he produced a five-hour stage version of Dostoevsky’s Demons for the Vienna Festival, and in 2001 he took apart Döblin’s Berlin Alexanderplatz and reassembled the epic in an over five-hour long performance at the Zurich Schauspielhaus.

As Castorf’s dramatised characters from the novels search for cathartic moments in a fog of epic duration, the audience feels itself at the mercy of time. The director thus became the progenitor of a theatre that seeks a correspondence on stage for the time-consuming narration of the novel. It is therefore no accident that, at the Berlin Volksbühne at the end of 2011, the hitherto most radical variant of a theatre which play with time could be seen on stage. This was the première of Ibsen’s banker drama John Gabriel Borkman under the direction of the Norwegian actor and director Vegard Vinge. He saw to it that time on stage went completely out of joint. Before the performance, the audience never knew how long they would be sitting in the theatre: one, seven, nine or twelve hours.

The audience on journeys through time

Vinge is one of the event-directors, who play with audience expectations and theatre conventions. For Luk Perceval, on the other hand, theatre is about traditional narration; he takes the audience on journeys in time through long stories. In 1999 he premièred the German version of Battles! (Schlachten!) in a co-production of the Salzburg Festival and the Deutsches Schauspielhaus in Hamburg. Perceval’s a panoramic view of the English War of Roses, developed together with the author of the original work, Tom Lanoye, was a concentrate of Shakespeare’s history plays. But the whole production lasted twelve hours and stands in the ranks of theatre evenings such as Stefan Bachmann’s over five-hour production of Genesis. The Bible, Part 1. This realisation of the Old Testament, oscillating between a spaghetti Western and a Beckett-like endgame, was presented in 2012 at Theater Basel. Bachmann refrained from taking the route that Vinge took in 2011 at the Berlin Volksbühne and Nicolas Stemann took in 2009 with Elfriede Jelinek’s finance crisis maelstrom Die Kontrakte des Kaufmanns (The Merchant’s Contracts). Both directors left it to the viewer whether he wanted to leave the room during the performance to get some food and return with a snack.

The Jelinek première was a four-hour reading performance; parallel to it, the audience became what is called in the case of medium-sized businesses “walk-in customers”. This twist ensured at least one thing in the not so long history of protracted theatre: the viewer had the choice of surrendering himself for hours uninterruptedly to a very different reckoning of time, or of immersing himself for a short stretch in real life in the foyer.

Jürgen Berger is a freelance theatre and literary critic for the “Süddeutsche Zeitung”, Berlin “Tageszeitung” and “Theater heute”. Since 2007 he has been a jury member for the Else Lasker Schüler Play Prize, and since 2012 he has been member of the Selection Committee of the Mülheim Dramatist Prize.