New Plays From Europe
Europe in the Broadest Sense 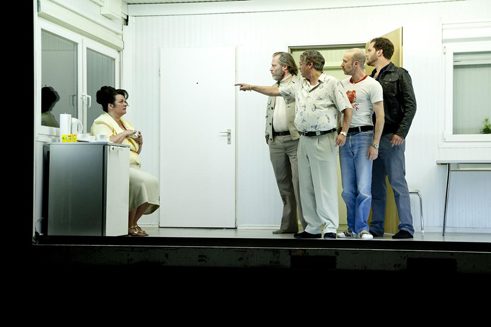 The twelfth edition of the Theatre Biennale “New Plays from Europe”  marked the provisional end of the festival. Manfred Beilharz, intendant of the Wiesbaden Staatstheater and co-founder of the Theatre Biennale, took his leave. It became apparent that the European theatre meeting would no longer continue in its existing form.

The finale of the “old” Biennale was marked by Christian Lollike’s production of Manifesto 2083. You could call this work by the Danish author and director a documentary, for it brings to the stage a manifesto of the radical right-wing Norwegian mass-murderer Anders Behring Breivig. Lollike’s work, a stage version of a pamphlet comprising 1,500 pages, came at the provisional end not only of the playwrighting festival. It also testified to how open the concept of the text has become at this Theatre Biennale, which in its younger years saw itself committed to the classical idea of the theatre text.

The festival was founded in 1992 in Bonn by Manfred Beilharz and Tankred Dorst. Every two years it gathered together up to thirty new theatre texts and productions from the theatre world of Europe in the broadest sense. After the fall of the Iron Curtain, it very soon presented theatre productions from the remotest parts of the former East Bloc. At the latest with the turn of the century, it became clear that not only the European theatre world had expanded, but also the text and performance concept of the invited artists.

In 2004 the Latvian director Alvis Hermanis and his New Riga Theatre came to Wiesbaden with the play  Gará Dzíve (Long Life) and Hermanis became within very short space of time one of those European theatre makers for whom the Theatre Biennale was the start of an international career. The elegy on ageing in an old people’s flat-share was the foundation for Hermanis’s ascent to the position of one of Europe’s style-forming directors. The almost wordless evening, freely adapted from Gorky’s The Lower Depths, was an example of how the festival, which had migrated with Manfred Beilharz from Bonn to Wiesbaden, reflected the aesthetic changes fermenting in European theatre.

The focus of the festival was always theatre texts, productions and playwrights such as Biljana Srbljanović, who presented in 1998, with the Beogradska Trilogija (Belgrade Trilogy) mini-tragedies from the Balkan war. Interestingly, it was writers like her who stood sponsor for the invitation of productions to the Biennale that were not based on classical theatre texts. In the hitherto last instalment of “New Plays from Europe”, under the artistic direction of Ann-Marie Arioli, Manfred Beilharz, Tankred Dorst, Ursula Ehler and Peter Michalzik, this could be seen very clearly. The play Zoran Đinđić arrived from Belgrade: a piece oscillating between documentary theatre and performance, an angry confrontation with the political murder of the pro-democratic and pro-European Serbian Prime Minister Đinđić.

The agitprop theatre author, performer, actor and director Oliver Frljić has nothing to do with traditional, text-based theatre. If that is what you wanted, you would have had to turn to Ibrahim Amir’s Habe die Ehre (ie. Have the Honour), a theatre text following the rules of the type comedy, which illuminates the theme of honour killings down to its absurdly comic angles. The dramatic debut of the Vienna-based Syrian Kurd author was premiered by the Vienna Wortstaetten. Those so minded could also attend parallel the German premiere at the Cologne Schauspiel – or remain in Wiesbaden and view the prison drama Hoplessly Devoted by the British rap poet Kate Tempest, a well-made-play in the guise of a dramatic musical.

Tempest tells the story of the imprisoned sing-songwriter Chess in a mixture of fast-cut dialogue and song insertions. Hopelessly Devoted was proposed by the British artistic sponsor Mark Ravenhill. Like many of his colleagues from (depending on the Biennale edition) more than forty countries, he made his recommendations of other authors, texts and productions free of charge and beyond his own writing-ego. This worked excellently, but is now to be done very differently.

Manfred Beilharz’s successor as intendant of the Hessian Staatstheater, Uwe Eric Laufenberg, left open for a long time whether and how the Theatre Biennale would be continued. Finally, however, it was announced that in future the festival would bear the name of the “Wiesbaden Biennale”. Further, that Laufenberg would “consistently continue” the course set by his predecessor “on a new conceptual basis”.

The new team will be centrally curated by Wiesbaden. Entrusted with this artistic reorientation and programme design are the director and producer Maria Magdalena Ludewig and the freelance dramaturge Martin Hammer. Then there is the new Wiesbaden Theatre director, Andrea Vilter. There will continue to be “new productions from other European countries”, but it is also planned “to initiate joint productions beyond national borders”.