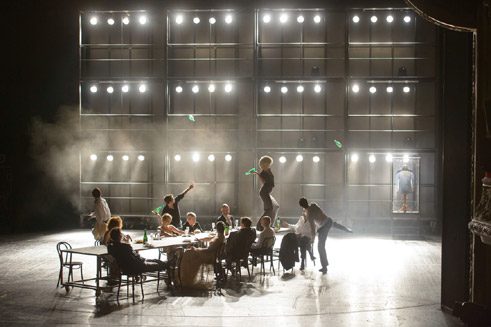 The German Theater is dealing with the First World War. But how do you show the horror, how do you portray the decline?

“Storm still”, you could say, echoing Shakespeare’s stage direction in King Lear. German-language theatres have joined the great battle: The theatre has struck out and sought to raise the questions of guilt and suffering involved in the collapse of Old Europe with the aesthetic means at its disposal. But the stage is not a trench, and dying is not an evening’s entertainment.

At the distance of a hundred years, it is everywhere plain that the theatre can only illustrate this epochal and epoch-terminating event. It shows and quotes (contemporary) poets, and presents itself as afflicted and helpless: it invents images oscillating between bare horror and morbid beauty, lets it rip and rattle, has many die, and is always a little wistful because what were at the time somehow the good old days came to an end.

“The Last Days of Mankind”

That the Austrian Emperor Franz Joseph can again manage to be a stage character is owing to Karl Krauss and his monumental drama Die letzten Tage der Menschheit (The Last Days of Mankind), in which the emperor and about 400 other characters appear, even if only as (a not just morally) worn-out military leader. Three theatres have taken up the actually unperformable play. Between cabaret complaisances and the attempt to have parallels to the current crises glimpse through, the productions imaginatively mark out the framework: in Dresden the play is performed in a gym and ends in baroque-bombastic cluelessness; at the Vienna Burgtheater it begins at the funeral in Sarajevo of the assassinated heir to the throne; and at the Vienna Volkstheater the scene shifts to a madhouse, where apparently the production locates the entire society of the day. But Kraus’s still not outdated, bilious satirical malice, despite all attempts at realization and the sometimes marvellous capering of the actors, falls by the wayside.

Sore point or deep wound: Sarajevo was a crossroads of destiny – and still is today. The documentary film-maker Hans Werner Kroesinger shows this in his detail-obsessed text collage: Battlefield Memory 1914/2014 at the Berlin Hebbel am Ufer (HAU), in which he succeeds in drawing the line from 1914 to the murderous conflicts in former Yugoslavia only a few years ago. The Balkans – so the monitory message of this more educational than theatrical piece – have long not exhausted their potential as a powder keg.

It cannot of course always proceed in the manner of a chamber play when war breaks out in the theatre. Martin Kušej crafted a real military farce for the Vienna Festival 2013 and the Munich Residenztheater. With loud pomp and fanfare, canon noise, sheet metal thunder and downpours, he staged three plays by the Croatian poet Miroslav Krleža, summing them up under the catchy and “world of yesteryear” evocative motto of In Agony: gloom and doom at its finest and six hours of skirmishes in a realistically modelled Galician East, with plenty of blood on the floor boards.

At the Thalia Theater in Hamburg, Luc Perceval chose to take a demonstratively different path. He refuses to believe that the reality of war can be adequately shown on the stage. For him, the word of the poet stands centre stage in Front: chiefly the works of Erich Maria Remarque and Henri Barbusse, who were themselves present at the great battles and created out of this bloody experience a literature as terribly brutal as its language is fascinating, a downright sickening literature born from the screams, the dying, the revulsion. And even in the static coolness that sounds here in these sentences, they still have a crazing effect.

Finally, the Salzburg Festival reached back for the really big blow. Six new theatre productions took as their theme the First World War and presented the audience with a mixture of known, unknown and new plays. No sooner had the satirical Bumsti (ie. boomy) from Karl Kraus’s Last Days (director: Georg Schmiedleitner) faded away then did Ernst Toller’s Hinkemann (literally: lame man) strike out to seek his misfortune in a demoralised post-war society. But in the production by the young Serbian director Miloš Lolić, the rarely performed, corrosively expressive play about a war returnee became a despondent fun fair carousel, which struggled more with the language than with the adversities of an epoch come out of joint.

In The Forbidden Zone, on the other hand, the British media virtuoso Katie Michtell lost herself and her subject of war completely in a grimly perfect play of medial possibilities, presenting a celebration of the art work in the age of every conceivable technical producibility: war and its impact were here only an aesthetically carbonized frame. The same may be said of Andreas Kriegenburg’s interpretation of Horvath’s Don Juan kommt aus dem Krieg (ie. Don Juan Comes Back from the War), a play that Kriegenburg stages as a grotesque costume party for nine women and a wimp; everything is geared to optical opulence, and the war fizzles out into an nasty occasion for nightmarish vaudeville scenes. In rhythmic language and body gymnastics, the whole runs down into carnival noises and Mozartian mellifluousness: at some point a small grenade crackles in the background, but actually the battle here is as far away as Kriegenburg is from Horvath.

By contrast, the Büchner Prize winner Walter Kappacher focuses his monologue on Georg Trakl’s Abschied very close up, and so too close for the simple biographical truth. Under the unambitious direction of the young Nicolas Charaux, the poet of harrowing lyrical anguish in the face of the thousandfold deaths around him, from the horror of which he escaped in November 1914 probably through suicide, seems like an errant all-purpose cardboard dummy.

After all these attacks of remembrance, the only work that really remains positively in memory is 36566 Days by the students of the Salzburg Mozarteum, a theatrical journey through the rooms of an old barracks (in scenes of quite varied quality) that probes the fates of individual, very specifically named people whom the senseless war robbed of a meaningful life. Instead of creating artificial characters, the play at least attempts to explore biographies, so that we today can perhaps draw a lesson from the spiritual emptiness which paved the way to the battlefields of Europe one hundred years ago.

Bernd Noack is a cultural journalist and theatre critic, and has been a jury member of the Berlin Theatre Meeting since 2014.