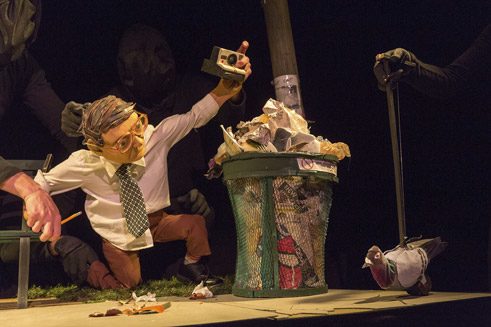 From 8 to 17 May 2015 the International Puppet Theatre Festival will take place in Erlangen, Nuremberg and Fürth for the nineteenth time. An interview with Bodo Birk, who has been head of the festival since 2003.

Mr Birk, you and your team are in the midst of preparations for the 19th International Puppet Theatre Festival, which will take place between 8 and 17 May 2015 mainly in Erlangen. Which productions do you look forward to most?

To Aurélien Bory’s Compagnie 111, in whose piece Sans Objet artists dance with a heavyweight robot from the automotive industry; to Nico and the Navigators and the Halle Puppet Theatre, who savour the metaphorical and sonorous variety of Shakespeare’s sonnets; to the poetic pigeon story The Pigeoning by the New York theatre maker Robin Frohardt; to Eva Meyer-Keller, whose work mediates between visual and performing arts and who will present a tryout of her latest piece Things on a Table and her very special cooking show Cooking Catastrophes; to Gisèle Vienne’s overwhelming The Pyre, which calls all visual habits into question; to of course the doyen of puppetry and a favourite of our festival, Neville Tranter, whose brand new production, The King – Downfall of a Superstar, will be performed in all three cities; to Les Ateliers du Spectacle, the ensemble of the object theatre master Jean-Pierre Larroche, which in To t at n-1 attempts to fathom the meaning of life in terms of mathematics; to Philippe Quesne’s The Next Day, a play performed exclusively by children; to Liquid Loft, in whose production Deep Dish four dancers merge into a Baroque-like landscape of organic objects; to the Theater Parkaue Berlin, which together with Forced Entertainment will perform the children’s play Das unmöglich mögliche Haus (i.e. The Impossible Possible House); and to the return of the French iconoclasts of the Théâtre de la Mezzanine, who in La Tragédie est le meilleur Morceau de la Bête slam onto the stage a play about the First World War …


Is it noticeable also this year that the festival interprets the boundaries of the genre of puppet theatre very broadly?

It’s true of course that the International Puppet Theatre Festival has a very great range of content and aesthetics, and that it’s part of the character of the programme that the boundaries between theatre, dance, performance, visual art and new media are overridden. There aren’t, I think, many festivals in Germany that pursue this idea as consistently as we do. Still, I wouldn’t agree with the formulation that the boundaries of the genre are thereby interpreted “very broadly”. On the contrary, we seek to take the concept of puppet theatre in its contemporary interpretation very seriously, and ask ourselves about each production what it has to do with puppet theatre. Exceptions of course always prove the rule. Quite a lot can count as a “puppet” on stage – not only puppets and objects but also the human body itself when it’s detached from its natural context, and of course projections, a ray of light, even a sound can be a puppet.

Beyond this, what makes the Erlangen festival a “special festival“?

Actually, most festivals today are much more than mere collections of guest performances. A peculiarity of the Erlangen festival is certainly the close cooperation with the Institute for Theatre and Medias Studies at the University of Erlangen, with which we are joint hosts of the “Young Forum”. At the Forum, students of puppet theatre from Berlin and Stuttgart and young drama students busy themselves for ten days, practically and theoretically, with the boundaries of contemporary puppet theatre. In general, reflection on the forms and content of theatre has come to play an ever greater role at the festival, and discussions of the productions are now an important part of the programme. Moreover, in recent years there’s been more and more practical work with children and young people: “Alles was ich bin …” (i.e. All that I am …) is the name of a multi-year project, also accompanied by the university, which gives an example of the potential of puppet and object theatre in practical theatre and cultural education. And – though other festivals do this too – we attempt specifically to promote long-term artistic positions by entering into cooperations or acting as co-producer.

How does the Erlangen public influence your programme planning? 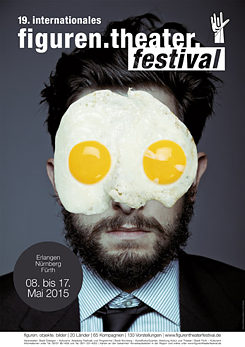 The poster of the 19th International Puppet Theatre Festival in Erlangen, Nuremberg and Fürth | © For all its formal experimentation, the International Puppet Theatre Festival is and remains primarily a festival for the public. For many people, especially in Erlangen, it’s the cultural highlight of the year. There are visitors who take a holiday during the festival and attend nearly all ten performances. In Erlangen, people don’t go to the festival to see one performance; they go for a whole day and evening and see several productions – this also has to do with the festival’s special dramaturgy and the immediate proximity of the venues, which are all reachable by foot within ten minutes. In our opinion the event character of the festival is by no means inconsistent with high standards and quality. Then too we cultivate our audience. In the weeks before the festival we organize an information stand in the Erlangen pedestrian zone every Saturday, where we come into conversation with the public. This is the great advantage of Erlangen’s small town structure – that the whole town lives the festival. This is naturally somewhat harder in Nuremberg and Fürth. But the closeness to the public pays off: in 2010, when the town was about to cancel the International Puppet Theatre Festival for financial reasons, the Erlangers took to the streets to save “their” festival.

Speaking of cancellation, is the future existence of the festival secure?

Difficult question. Erlangen community politics shows no tendency at present to want to economize the festival out of existence. Since 2010 at the latest, the Erlangen City Council has recognized its importance and stands completely behind it. Nevertheless, the financing of cultural events has become more and more difficult. Despite the good economic situation, sponsors everywhere are withdrawing from culture. The interest rates of recent years mean that foundations have less and less funding to distribute and many public subsidy providers exclude regularly recurrent events from eligibility so as to be particularly innovative. Yet it is just events like the International Puppet Theatre Festival that show how important a continuous development is to create innovations for a broad public! Then there’s the problem that the cost of mounting events has increased disproportionately in recent years – safety rules, travel and accommodation expenses, Gemma and the Artists’ Social Insurance (Künstlersozialkasse / KSK) … Time and again I’ve been told that the money doesn’t seem to be there and that the festival becomes more expensive every time. Yes, of course! Everything becomes more expensive every year; the municipal budget too gets bigger every year – so why should cultural events cost the same for years on end? This issue will always be with us.