Heiner Müller
In the Epoch of Comedy 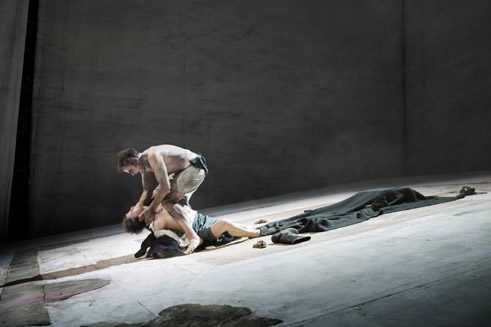 Heiner Müller died twenty years ago, on 30 December 2013. He was the most influential German dramatist of the second half of the twentieth century, the chief successor of Bertolt Brecht. Companions such as the actor Ulrich Mühe or the director Dimiter Gotscheff, who performed Müller’s work after his death, are themselves now no longer among the living. Current theatre productions of his plays testify in many ways to the break with the reality from which Müller’s work originates.

Heiner Müller made a last prominent appearance in 2014, posthumously, of course, at the opening of the Berlin Theatre Meeting. He could be seen in his now long-legendary film interview from the 1990s with Alexander Kluge. Müller, as always incessantly puffing a cigar, spoke about ancient Rome, which invariably served him as a cipher for contemporary civilization. And he spoke about Rome’s will to destruction in contrast to the conciliatory aspirations of the Phoenicians, who, led by Hannibal, refrained from destroying the Eternal City and instead withdrew, because they were a trading people, for whom peaceful co-existence is obviously more profitable.

And viewing the film one thought quietly to oneself: why did Müller never draw the line from the Phoenicians to the mercantile spirit of Anglo-American modernity? Why for him was American inevitably Rome, apocalyptic imperialism, always only “Heil Coca Cola” (Hamletmaschine) and human catastrophe (“Auschwitz is the altar of capitalism”, as he once said in an interview)? The thought of an open society under the banner of a market economy was alien to Müller. He himself recognized early on that with the extinction of former East Germany his “material” was lost. With German reunification was also lost the coordinate system of his dramatic art, the thinking in the sharp distinction between friend and foe, East and West, of Master and Slave within the system of capitalist exploitation. To this break between Müller’s reality and ours many productions at smaller stages and far from the big cities in the last twenty years since his death in 1995 have often borne witness.

A life full of threats

The film by Kluge was shown at the Theatre Meeting premiere of Zement (i.e. Cement) in the production by Dimiter Gotscheff. For him too this was a posthumous appearance. With Gotscheff’s death in October 2013, we lost the last great Müller director of our time, one who still had a direct line to the biographical and aesthetic depths of this art. To Müller’s life, which was shot through with real threats. As a teenager, the native of Saxony, born in 1929, survived the last days of the war in the “Volkssturm”. In East Berlin then he found his way into the theatre as a dramaturge and dramatist. At the latest with the prohibition of his post-war drama Die Umsiedlerin (i.e. The Resettler) (1961) Müller entered the circle of writers kept under watch by the GDR surveillance state and which the West discovered as dissidents and promoted by performances and the publications of texts. In 1985/86 Müller received the two highest artistic awards in East and West: the National Prize of the GDR and the Büchner Prize. That as a tightrope-walker and prominent intellectual Müller was also embroiled in the surveillance practices of the Stasi was in part revealed in his autobiography Krieg ohne Schlacht (i.e. War without Battle, 1992).

Aesthetically, Müller’ work began to diverge from the early “production pieces” still oriented to Brechtian drama, including Lohndrücker (i.e. The Wage-Squeezer) (1956). From the mid-1960s he increasingly drew on mythic material, creating adaptations such as Macbeth after Shakespeare. The turn to myth and historical materials was a common practice among East German writers, used under the conditions of censorship to treat the reality of the regime metaphorically. Formally, Müller texts of the 1970s and 80s gradually dissolve the form of the drama, press towards monologue-like works such as Hamletmaschine (i.e. Description of a Picture) (1984); the keynote becomes more pessimistic, not least in response to the state-prescribed historical optimism, which more and more ignored the shortage economy of the GDR.

In diverse texts on poetry Müller formulated the premises of his work, including in his important “Letter to the Director of the Bulgarian Premiere of Philoctetes” (1983). This very director was the Bulgarian-born Dimiter Gotscheff, who immigrated to Germany in 1985.

Gotscheff was the only director of the period after the fall of the Berlin Wall who regularly performed Müller’s plays on metropolitan stages. These included humorous, slapstick-like productions such as GERMANIA.Stücke (i.e. GERMANIA. Plays) at the Deutsche Theater in Berlin in 2004. But Zement, produced in 2013 at the Munich Residenztheater shortly before Gotscheff’s death, was a work full of pathos, a dark spoken piece set on a barren stage. It brought Müller’s imagery, always aiming at human extremes, to life: “Our struggle has only begun, and we have a long way before us. Our feet will not reach its end, Chumalov, but the earth will yet drink all kinds of blood before we spy the goal at least from afar”. It was a pathos that set itself in relation to the historical situation in which the play takes place: in the 1920s after the Russian Revolution, war returnees like the hero Chumalov work on the reconstruction of a cement factory and struggle against the opposition of the Soviet administration. Violence pervades Chumalov’s married life as does the influence of the Party, which punishes any form of deviation with the death sentence.

The age of comedy: blood and lead become paper

The earnestness of this late work by Gotscheff stands in contrast to what has otherwise stamped Müller’s reception. In 1994 Frank Castorf, with his production of Pension Schöller / Die Schlacht (i.e. Boarding House Schöller/The Battle) opened Müller’s work for comedy. Castorf has regularly incorporated Müller’s Der Auftrag (i.e. The Commission, 1979) into his productions – as a set piece to comment on the decline of the middle class in Central Europe. Der Auftrag transfers the conflict between East and West to the post-colonial conflict between the so-called First and the Third world and is on account of the global situation currently one of Müller’s most frequently performed texts. At the same time its use by Castorff has always something allusive, something comically alienating about it.

“It is to be feared that the end of the GDR also means the end of the Shakespeare reception in Germany. I do not see why one should produce Shakespeare in the Federal Republic, unless it be the comedies”, wrote Müller in Krieg ohne Schlacht. The sentence has proven to be prophetic for his own work. The Castorf student Sebastian Baumgarten has recently clothed his interpretation of Zement at the Gorki Theater in Berlin (2015) in the guise of comedy. It begins with a sheepish intro in which the actor (Thomas Wodianka) recites haltingly Müller’s interview statements about his ambivalent attitude towards dictatorship. A distancing gesture, which marks our historical remove from Müller. Then Baumgarten presents the history of the revolutionary as a wild comedy performed by zombie-like characters flourishing cardboard guns. “Why doesn’t it occur to anyone here that it’s all cardboard”, improvises one of the actresses (Cynthia Micas). This is symbolic. A changed reality demands that access to Müller’s dramatic world of blood and lead also change. The dramas are no longer performed directly, but move to a sort of meta-level. Müller’s dramatic art becomes “paper”, quotable book learning. It is viewed like difficult-to-decipherable, sometimes quirky writing washed up to us from a dark time.

Christian Rakow is an editor of the Internet portal Nachtkritik.de and theatre critic for “Theater heute”, the “Berliner Zeitung” and the “Märkische Allgemeine Zeitung”.