Useful Art
What role can art play in politics? 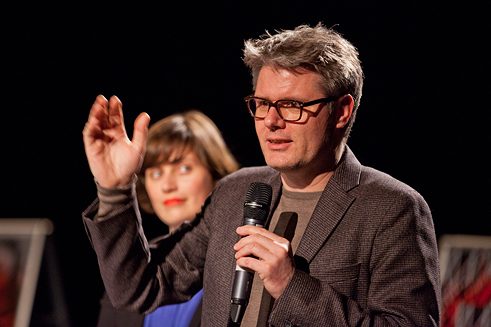 Suddenly there is this persistent call for an art that is useful, for direct commitment, for artistic activism, for intervention in the political reality of our society and economy. And it is good so.

Of course it is a provocation: after hundreds of years of fighting for the autonomy of art, after decades of learning that the essential quality of art is ambiguity, after years of repeating that art poses rather than answers questions, there is suddenly this persistent call for an art that is useful, for direct commitment, for artistic activism, for intervention in the political reality of our society and economy.

This call is not new; it has precursors – the Productivists, for example. Contradicting Naum Gabo’s stipulation that Constructivism in post-revolutionary Russia should be committed exclusively to abstraction, artists such as Aleksei Gan, Alexander Rodchenko und Varvara Stepanova demanded a practical, socially useful role for art. In 1973, some fifty years later, Joseph Beuys opened his Free International University (FIU) and proclaimed: “To be a teacher is my greatest artwork”.

Since the early 1990s the concept of socially engaged art has been developed with a fresh intensity. Artistic activism has become a favourite theme of the art world especially in recent years with their countless political and economic crises. Because no matter whether in the Tahrir, Zuccotti, Syntagma or Maidan Square, before the Kremlin, in Japan after Fukushima, amidst the iconic architecture of Brasilia or under the umbrellas of Hong Kong, artists are invariably among the first to take part. But a question comes up again and again: what role can art play in politics?

Against a homeopathic approach to politics

It seems that we are witnessing a paradigm shift in the relationship between art and politics. Following a generation of philosophers who developed their theoretical concepts from very concrete, often radical political experience and commitment (for example, the leftist groups in France and Italy of the 1970s), have come, especially since the 1990s, generations of philosophers (and artists, curators, etc.) who have continued these reflections, but all to often failed to root them in current political realities. Thus we have become accustomed to call concepts, cultural theories and artworks “political” even if they are based only very remotely on theories that have themselves been abstracted from the concrete political impulses that brought them forth. A very homeopathic idea of the political realm has become for many the guideline of contemporary cultural discourse. The constant awareness of the complexity of concepts such as truth, reality and politics itself has manoeuvred our Western middle-class discourse into an impasse: either we over-simplify or we make everything too complicated; either we are too populist or we withdraw into a hermetic ivory tower. Either we include too much or we exclude too much. We have reached a point at which the indispensable awareness that everything is contingent and relative often serves an excuse for intellectual relativism.

The growing need for socially engaged, participative art, for interventions and activism, for an art that very directly and practically meddles in affairs, is also a response to this relativism. In her Introduction to Useful Art the Cuban artist Tania Bruguera, one of the chief figures of this movement, declares: “It has been too long since we have made the gesture of the French Revolution, the epitome of the democratization of art. We do not have to enter the Louvre or the castles, we have to enter people’s houses, people’s lives. This is where useful art is.”

Is that still art?

No wonder that such demands immediately revived the old question that has attended all avant-gardes and essentially defined the aesthetic discourse of the twentieth century: is that then still art?

To repeat this question, however, is all the more redundant since most of the answers to it have been already given. Socially committed, participatory and useful art practices are often based on artistic strategies of the 1960s and 70s: installation art, performance and conceptual art, for instance, have always placed their focus on generating situations (reality) instead of representing them. They emphasize processes and social relations, and they question the concepts of authorship and individualism, thus practicing a critique of the logic of the capitalist system. The ideas of participation and intervention have radicalized the understanding of the public and re-defined the very gradual (and often misunderstood) differences between voluntary and involuntary participation.

Naturally the call for usefulness is not unproblematic; it seems to be in line with the social-democratic instrumentalization of art as social work or appeasement strategy. But this fear underestimates the resistant qualities of art: the most impressive examples of socially engaged art are far from being content with providing symbolic gestures. Tania Bruguera’s Immigrant Movement International has developed into a political party and a trade union-like organization for illegal immigrants in Queens, New York. Jonas Staal’s New World Summit has opened alternative political spaces for organizations that have been excluded from democratic discourse and the constitutional state. The Berlin Centre for Political Beauty, inspired by the New York Yes Men, has brought attention to issues neglected on the front pages of newspapers and made politicians see red with targeted media campaigns. The Austrian “Wochenklausur” continues to find new ways of diverting money and attention from the art market to social projects. Santiago Sierra and Artur Żmijewski touch in a constantly disturbing way the wounds that we try so hard to ignore, while Paweł Althamer or the late Christoph Schlingensief try to be a part of the complex process of healing.

Such works do not offer easy answers; they do not afford simple relief. They are useful not through their direct engagement but rather by criticizing subtly or polemically the capitalist status quo. Their practice is at once symbolic and concrete. And they shift the weight from the ambiguity of the artwork to the ambiguity of our own lives. In very different ways they all subscribe to Tania Bruguera’s call: We must put Duchamp’s urinal back in the toilet – where it can again be of use.

Florian Malzacher is a freelance curator, dramaturge, writer and Artistic Director of the Impulse Theatre Festival in Düsseldorf, Cologne and Mülheim/Ruhr.