Theatre and Refugees
Change of perspective with a danse macabre 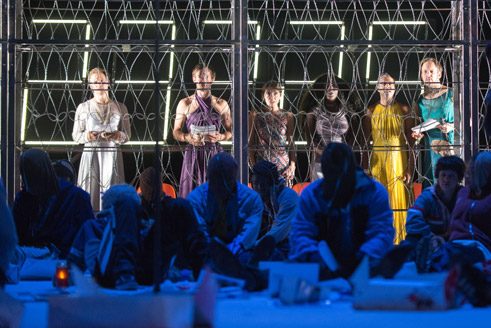 That art should be related to politics is today a common demand. There is even the assumption that theatre is more or less per se political. But theatre is no longer the site of middle-class self-understanding and reflection that it was when it was established in Germany in the eighteenth century. The equation of theatre and politics is far from self-evident. The relations and references between theatre and must be continually reproduced and re-thought.

If politics is that which defines common rules and thus constitutes a community, then these rules do not become recognizable in their repetition on stage or in the familiar daily treatment of political subjects, but rather in their interruption. Interference with and disturbance of the supposedly known rests on the unrepresentable: for example, many theatre professionals are currently asking themselves how they can treat the sealing-off of Europe to refugees from war and poverty. Many of their works are close on the tracks of reality, using research material or creating performative spaces of experience – such as the interactive performance game Right of Passage developed by the group machina Ex, premiered at the Düsseldorf Forum Freies Theater (FFT) in March 2014. In this piece every viewer must make his way as a refugee through the bureaucracy of a fictional reception centre. Hans-Werner Kroesinger, in his documentary theatre work FRONTex SECURITY presented at the Berlin Hebbel am Ufer (December 2013), got to grips with the border management agency in the historical context of European immigration policy. And the director Yael Ronen worked on a biographical basis in Common Ground at the Berlin Maxim Gorki Theater (March 2014): five of her actors who fled to Germany from the Balkan War in 1990s explore their common past and present on stage.

The better side of the West

The treatment of the refugee issue is not only complex, but also always presumptuous: we white Westerners are only in a very limited position to speak from the perspective of those we have learned to constitute as the “others”. The theatre pieces by machina Ex, Kroesinger and Ronen solve this problem by working on the basis of documentary or biographical material. Others treat the change of perspective in a decidedly more artistic manner: for example, the Austrian writer Elfriede Jelinek, who puts the predominant white, Western discourse in the mouths of her chorus of refugees. She thus executes the change of perspective explicitly against the backdrop of her own cultural history: her Die Schutzbefohlenen (The Wards), premiered in May 2014 at the Theater der Welt Festival in Mannheim, has a chorus of refugees speak the oldest refugee drama of all, Aeschylus’s “Schutzflehenden”. In this furious and raging text, the eponymous “wards” fight for their place in the world, for the right to speak and be heard, the right to be recognized as human beings, and not merely as a problem to be deported. They invoke humanism, human rights and democracy – the better side of the West – which, however, apply only to those who have installed them. Jelinek bends to some extent the collective memory; she takes the promises of the white man at their word and puts him face to face with his claims to power and his exclusionary practices.

A similar volte-face towards European cultural history has been executed by the performance collective andcompany&Co. in Orpheus in der Oberwelt: Eine Schlepperoper (i.e. Orpheus in the Upper World. A Traffiker Opera), premiered on October 2014 at HAU. It combines the Orpheus myth with the refugee issue. Both converge on the Turkish-Greek border by the Evros River, in which once Orpheus’ singing head floated and where today metre-high security fences keep fugitives out of Europe.

The character who serves to provide access to this quite difficult issue is the trafficker, ostracized in everyday media discourse as crisis profiteer who squeezes a cruel profit from the plight of others. Andcompany&Co. sets his morality to one side and topples this image: the trafficker here is someone who helps people to escape and brokers between two worlds. In the border zone nothing more seems to be certain: this Trafficker Opera combines Monteverdi’s L‘Orfeo with Hanns Eisler and Kurt Weill; a counter-tenor sings, at once quite comically and with sad distress, of how no human being is illegal, while Frontex, in a “Push-Back-Operation”, pushes the refugee boats back into the sea – out of love, as Alexander Karschnia announces on stage, for did not Orpheus too look back out of love at Eurydice, even though he thus lost her?

The desperate comedy breaks through the tone of dismay and concern, thus highlighting the unspoken rules of supposed correctness that prevail in public political discourse. It always constantly reminds us that this is theatre, an imagined situation, an imagined treatment, and at the same time a moving danse macabre and dirge, in which the theatre again truly becomes a ritual. For when the performers lament the refugees who are daily drowning or dying of thirst, the audience becomes painfully aware that, during these very minutes, people are dying on the borders of Europe.

By taking up political issues, theatre has put its means and devices up for negotiation: How can something be rendered representable? This question is being answered today in very different ways by having the audience itself re-enact for a certain time the experiences of refugees, or by having actors discuss their lives on stage. In the cases of Jelinek and andcompany&Co., it is taboos of public discourse that are broached in various ways, whether as the question whether actors should be allowed speak for refuges at all or human traffickers are feasible figures to convey the treatment of an issue. As in all the mentioned productions the conditions of theatre itself, of acting and speaking on stage, are constantly addressed, they make the traffic rules of society recognizable and put them in question. For theatre is political above all when it reconsiders its own structures, which, after all, arose from that cultural history whose validity is today being so urgently questioned.

Esther Boldt works as a freelance author for newspapers and magazines such as “taz”, Nachtkritik.de, “Theater heute” and “Tanz Zeitschrift”. She has also been a member of various juries, for example at the Tanzplattform Deutschland 2014 (i.e. Dance Platform Germany 2014).