Ensemble Theatre
“The actor is the message!” 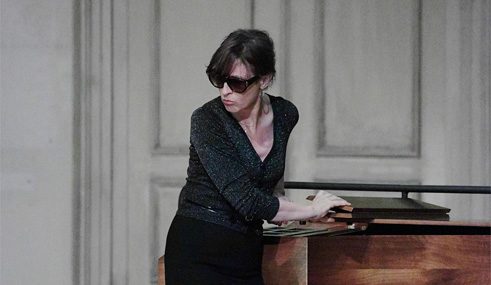 The actress Sophie Rois on performing without a role, the life of an actress at the Berlin Volksbühne and the success of something magnificent against all probability.

Sophie Rois, according to Matthias Lilienthal, who triggered a culture war at the Munich Kammerspiele between performance and acting theatre, you’re the one who initiated the “paradigm shift”: “She put what in the end is called ‘role’ through the needle’s eye of her hoarse voice and slender body”. Is that the way you see it too?

A hundred years ago, at an audition at the Freie Volksbühne, Hans Neuenfels said to me I act so unpsychologically – he meant it as a criticism. I’d prefer to put it this way: the kind of acting based on explaining a role doesn’t interest me – when everything I do on stage and how I say it is supposed to be a hint about the psychological nature of my “role”. Maybe what Lilienthal meant was that at the Volksbühne the actor isn’t the medium but the message itself. “Roles” in the other sense have never been my concern, but rather texts, positions, the people with whom I work. Me and my role – that’s such a lonely business I get depressed just thinking about it. In life I have to try to play the role of Sophie Rois in a more or less homogenous fashion in order to be socially viable. On stage I can work with ruptures, with fragments from texts, scenes from other plays, films in which I’m acting at the time. I can kiss men and women I don’t know with impunity. The pure repetition of unbearable reality – why on earth should I do that? When working with Christoph Schlingensief or René Pollesch the concept of a “role” doesn’t have any meaning anyway. My ideal of entertainment is the Marx Brothers, their way of comporting themselves towards reality: they don’t complain about the conditions; they turn them upside down; everything is set into motion and there’s a Happy End. As Robert Pfaller says: “Something magnificent can succeed against all probability”.


You studied at the Max Reinhardt Seminar in Vienna in the 1980s. Don’t you learn there just that – to turn the inside outwards?

I didn’t learn anything there. But that was definitely my fault. Back then I was so stubborn. I was capable of learning only on stage. In front of an audience. In 1987/1988, I was at the Renaissance Theatre in Berlin and acted under the direction of Gerhard Klingenberg Feydeau. A privately owned theatre, short rehearsal times, the opposite of the Volksbühne, you might think. But no! Nothing was so much like my work at the Volksbühne as that. Klingenberg was a real theatre man, who knew exactly how the whole thing works. Tradition and pragmatism. It was clear: we weren’t going to prevent the Third World War with our art, but we had Helmut Lohner on stage, who carried his comic performances to such extremes that the audience became almost hysterical. There were some great colleagues, popular Berlin actors. In these sorts of plays, certain manners of acting, which posit a priori profundity and momentousness, are of course out of the question.

In 1993 you went to the Völksbühne, and since then you’ve worked with very specific directors, none of whom indulge in dressage: Castorf, Schlingensief, Pollesch, Fritsch. What was then in no time flat considered the completely new, the great paradigm change ...

Yeah, but for me it wasn’t. For me it was more like finally arriving home. It was all so easy. Everything that had tormented me before was gone. My first Schlingensief production, Kühnen 94 – I thought I was heaven! This intelligence, this nonchalance. That blew the lid for me. Schlingensief had this pleasure in people who didn’t fit into the pattern. Every day you came to the rehearsals as if to a playground. And then there were the great actors from the home, the so-called disabled; the alienation effect was already built in, really terrific. I learned there from scratch, very concretely, what performance means. Not only to perform but also to see, to experience this kind of theatre, saved my mental and emotional life many times over.

That’s a way of performing which dissolves all boundaries, allows everything, conceives of everything as possible.

But it doesn’t simply twang into the realm of fantasy; there’s always a very specific relation to reality. The starting-point is, I think, something like Punch-and-Judy theatre, the commedia dell’arte. We’re traditionalists! I always have to think of Ariane Mnouchkine’s Molière, of the scene in the marketplace. Italian actors are performing Death and the Rich Man on a stage no bigger than a table. It’s so compressed, so exaggerated, so distorted that it speaks to us. In this distortion, this compression, the truth comes to light. That’s the way I’d like to act. But can’t.

Oh yes you can. But how does this free, unbounded way of acting fit the discourse theatre of René Pollesch?

Can’t you see? It’s a way of thinking that gives me great pleasure; it’s fast, it makes wild, unexpected, ambushing connections. So far, the process of production has gone like this: Bert Neumann puts up a set and we work out a play that relates itself to the space. We work off the questions that really aren’t clear for us. Just as recently in Zürich, where Neumann re-created Caspar Neher’s stage design for Brecht’s Antigone Model, one of Brecht’s last works. The question was: What is the acting aiming at, what does it want? And, damn it, what’s this play about?! For what does Antigone die?

The era of the Völksbühne comes to an end with this season after twenty-four years. Can you imagine performing regularly at another theatre?

You mean you weren’t cast at the Volksbühne? You could simply say: “No, I won’t do it”?

Yeah, of course, and the same applied to the other actors. That should be completely matter-of-course for an adult. And it also applies the other way round: I can say “I want it”. Castorf installed a mode of production very different from the usual one at municipal theatres. Maybe you can’t imagine it, but you can speak with an actor about whether he or she wants to join in. Castorf never had any interest in disciplining actors. If he had, we could never have done the work we did. There’s this total paradox in German municipal theatre that Mary Magdalene is fighting for freedom on stage while the operation all round her is completely unfree and hierarchical. And if the actress who’s playing Mary Magdalene doesn’t function the way the director imagines she should, then she gets a slating. In the name of art it’s expected she put up with everything. At the Volksbühne it’s different. The system of subsidies positively imposes the obligation of artistic freedom! This includes staging productions that weren’t so well attended but were important in our context. That doesn’t matter now anyway because we’re always full to bursting. Everyone wants to see real Volksbühne again “before all that comes to an end”, as a New York director said.

So in this way the Volksbühne is – and will soon be was – unique in German theatre?

I think so, yeah. I count myself very fortunate to have worked during the decisive years of my acting life at this theatre and with these people. This freedom shaped me, forever. I just happened to be at the right place at the right time. I’m one lucky beggar.

Barbara Burckhardt conducted the interview. She is a theatre critic and editor at “Theater heute”. From 2005 to 2007 and again from 2014 to 2016, she was a member of jury of the Berlin Theatre Meeting, and from 2010 to 2013 of the Mülheim Theatre Festival.