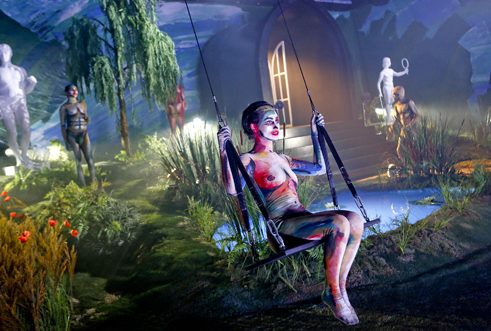 An interview with Dorothea Marcus and Till Briegleb, two jury members of the Berlin Theatre Meeting, on the state of German-language stages, the meaningfulness of quotas, jury discussions and hotel rooms.

Mrs Marcus, Mr Briegleb: You and your jury colleagues have seen a total of 377 productions in 63 cities. How many nights have you spent in hotel rooms?

Dorothea Marcus: I’ve counted them especially for you: about twenty. But there were also five nights in the night train and twelve nights’ stays at friends, who luckily, in this respect, are scattered over various cities. So forty nights not at home.

Till Briegleb: My last business trip listing for taxes is from 2015 and states that I was on the road on 162 days. About three-fourths of them were for the Theatre Meeting. It will probably be the same in 2016.

Hardly anyone else has as good a view of the theatre scene as you do. What developments have you noticed?

Briegleb: World politics has come to the fore in theatre and caused such a discernible unease that themes and production concepts are becoming more and more explicit. As pros in the evaluation of language, verbal and non-verbal, directors evidently feel particularly provoked by the failure of reasonable communication, which has become the globally dominant communicative act through the disconcerting triumph of populism.

How does that manifest itself?

Briegleb: This devastating departure from the familiar forms of consensus-oriented dialogue and the almost demonic attraction of the new leader figures, who are marked above all by the brazenness of their exhibitionistic ignorance towards truth, credibility, reliability and causality, is symbolically reflected in many of the invited productions: ruptures and loops are recurrent metaphors and themes, carrying the very monitory undertone that history can structurally repeat itself. The associated fatal group dynamics and new lust for uniformity occupy the directors of many of the invited plays. And the moments when fear and stupidity join with power are also a major concern of many works that were under discussion but weren’t in the end invited.


Have you observed something similar, Mrs Marcus?

Marcus: I’ve noticed especially narratives of atmospheres that might be described as “pre-escalatory”: anticipating a profound change of the world, but not naming it specifically. The stylistically over-stylized despair of Simon Stone’s Three Sisters at the Basel Theatre, the wistful coolness of the lost hipster in Olga Bach’s and Ersan Mondtag’s Die Vernichtung (The Annihilation) at the Basel Konzert Theater, the abysmal loneliness of the reasonable man in Johan Simon’s Schimmelreiter (The Rider on the White Horse) by Theodor Storm at the Thalia Theatre in Hamburg – they all fit into this picture for me. I’ve also been struck by the increasing importance of the installative dimension in theatre and the cross-references to the visual arts.

For you, Mrs Marcus, it was your first year on the jury. What surprised you the most?

Marcus: That the many trips can be combined with my everyday life, and that it’s by far less lonely and strenuous than I feared. Rather – inspiring, enriching, a privilege.

Mr Briegleb, you on the other hand have been on the jury since 2015 and this year the rotation has given you five new colleagues. The average age is now lower and the male-female proportion more balanced. Has this actually had significant consequences for the selection, or is the effect of the jury structure generally over-estimated?

Briegleb: In the previous year a jury of one woman and six men and with a “higher average age” invited six women directors and five women newcomers. This year, a jury of four women and three men, with a lower age average, found only one woman director and four women newcomers (all of whom are about fifty). Marvellous how uncontrollable these decisions are!

With the Munich Residenztheater, the Berlin Volksbühne and the Hamburg Thalia Theater “only” three flagship houses are present at the Theatre Meeting; otherwise many smaller stages and two independent productions. Is this by chance, or is it a reliable trend?

Briegleb: I think it’s a bit random, because the same directors who produced works in Bern, Mainz, Leipzig or Basel also work at municipal theatres in Berlin, Hamburg; Vienna and Munich. The upbeat statement that can perhaps be inferred from this is that any theatre can mount a production worth being invited to the Theatre Meeting if the artistic direction is really prepared to dare something.

Marcus: If there’s a trend to be discerned, then it’s this: there are more and more international co-productions, with ever bigger partners. As a result, more money is spent on the productions. The boundaries between municipal theatre and independent scene, and also those between genres, are being increasingly blurred; this is reflected not least in the invitation of a work like Milo Rau’s Five Easy Pieces to the Impulse Festival. The theatre landscape is becoming more hybrid, more permeable, more international.

What did the jury argue about most intensely?

Briegleb: About the various productions that weren’t invited. The final selection is by far the most conflict-free one that I’ve ever experienced since being a member of the jury. This doesn’t apply to all the productions, but to those that were chosen unanimously.

Did you also find the discussions so harmonious, Mrs Marcus?

Marcus: There were quite a few disputes, but far fewer than I expected. They could flame up over details: How hybrid and permeable may an art form that is relevant to the Theatre Meeting be? Where are the boundaries between genres; at what point is something to be considered only as dance? What does “arbitrary” mean as an artistic judgement, and what “vain”? We also argued about how colonialism and populism are portrayed. At all events, it was exciting.

It’s a well-established ritual: no sooner is the selection for the Theatre Meeting released than the criticism begins. Too little from the “provinces”, too little from the East, or, as this year, too few women directors. Were these things discussed in the jury – and would quotas make sense as an instrument in the arts?

Marcus: Quotas are certainly not a useful instrument, but, as my colleague Margarete Affenzeller once said, you have to look for women where they’ve been hidden: that is, on the backstages, at provincial theatres, in smaller formats. We tried. If nevertheless we found only one woman director we wanted to invite – Claudia Bauer and her Leipzig production of 89/90 – we did discuss the women’s question very intensely. Of the 377 stage productions viewed, only a fourth was by women: I’d never have thought this could still be the case in the season of 2016/17. Women are simply dramatically under-represented.

Briegleb: I know of no jury, whether at the Theatre Meeting or anywhere else, in which resentment against women, the provinces or the East plays even the slightest role. Quite honestly, this suspicion, which lurks behind many a criticism, is completely without foundation. What we discuss are works of performative art that have to prove themselves in themselves and in competition with other pieces. The question whether they are produced by ten men, ten women or ten robots, or happen to come from Aachen, Anklam or Ausgsburg, has no place, in my opinion, in a public competition. It’s true that there are always wishes by some jury members to bring a subject such as “refugees” or a certain part of the country that has previously enjoyed less presence at the Theatre Meeting strategically to the front; but it leads, in my experience, to a weaker selection, which is detrimental to the idea of this festival, which is to effect a strengthening of the theatre as an important platform for contemporary culture.

The interview was conducted by Christine Wahl. She is a writer and theatre critic for various publications, including the “Berliner Tagesspiegel”, “Neue Zürcher Zeitung”, “Theater heute” and “Spiegel Online”. From 2001 until 2013 she was a member of the juries of the Capital Cultural Fund and the Berlin Theatre Meeting. Currently, she is a member of the Selection Committee of the Mühlheim Theatre Festival.