Puppet Theatre Festival
Experimental arrangement in the “in between” 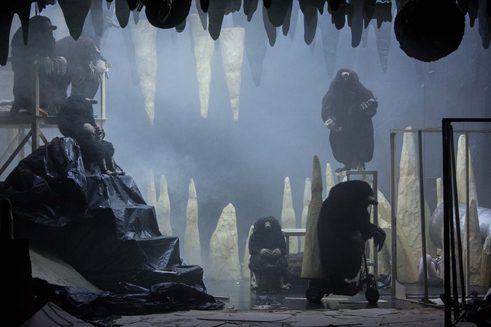 Every two years, four cities in Franconia host an international puppet theater festival. A look at the festival program 2017 shows: the concept of "puppets" and "theater" is very broad.

For ten years now the International Puppet Theatre Festival in Erlangen, Nuremberg, Fürth and Schwabach, which takes place every two years and is one of the most important theatre scene meetings in Europe, has borne the subtitle: “Puppets. Objects. Images.” This makes it clear that “puppet theatre” here is understood in a very broad sense, both with respect to “puppets” and with respect to the understanding of “theatre”. Accordingly, the programme of the twentieth edition of this mammoth event proved to be aesthetically diverse and, especially in Erlangen, provocatively interdisciplinary.

Curatorial peculiarities of the participating cities were already evident at the beginning of the festival. In Fürth, the focus was clearly on productions that tell compelling stories with puppet and people – such as the visually powerful, highly acclaimed opening performance M – A City Seeks a Murderer, performed by the Magdeburg Puppet Theatre ensemble under the direction of Roscha Säidow. Nuremberg opened with Chris Haring’s dance theatre production Foreign Tongues. In this Austrian production the dancers act like puppets that are forced to speak in foreign languages: one of the extraordinary dance performances at the interface with puppet theatre shown at the Nuremberg venue.

And in Erlangen the French director Philipp Quesne abducted the audience to a hybrid theatre world in which human-sized moles roll about, stumble, give birth, die, dance and make music between the pull of gravity and floating dreams, between coarseness and poetry, between banality and existential conflict. The music is loud and trendy. An almost too clear allegory of our human existence, droll, awkward and moving. (Puppet) theatre? Scenic installation? Dance? Pop concert? Performance? At any rate, an occasion for intense discussions lasting late into the night in the hospitable pubs along the Erlangen theatre mile. A scenario that was to repeat itself every evening.

What struck you in this year’s extensive programme was the experimental gesture of several productions. The production by the Israeli director Ariel Doron, Visiting Hours Are Over, for example, was like an experimental arrangement that led the viewers into a situation in which decisions are demanded: there is a mass execution of puppets, the audience is up very close, everyone can move around in the room, intervene or remain in the position of the observer. Oppressive, disconcerting and very uncomfortable.

An experimental gesture also dominated the scenic installation The Assembly of Animals by the British visual artist Tim Spooner. As in a slightly chaotic laboratory, experimental setups are presented; all contain bizarre, unstable mechanical figurations that are reminiscent of animals. These are disassembled, re-arranged and set into motion, ungainly and touching. Again and again something or other breaks down in this mechanical menagerie. Sometimes even the wobbly laboratory table itself, which, in the brief moment of collapse, emanates something animal. It is a poetic and melancholic game with precarious balance (also between thing and living being) and with failure. The children in the audience had an astonishing amount of fun. The adults debated whether this is still theatre. Or visual art. Or something in-between.

In her I‘ve Never Done It Before, the Croatian performer Barbara Matijević decidedly presented her stage as an experimental media laboratory chock full with a talking origami computer, oscilloscope, cameras, synthesizer, cardboard boxes, LED lights and diverse other banal to obscure objects. With a dazzling presence, she invents stories with these objects through fake self-experiments in the style of do-it-yourself videos on You Tube. And, in passing, parallels of the quirky, exhibitionistic DIY internet culture are negotiated with obsessive, artistic creative processes, and of the relationship of the performer-body to the objects that blur and limit the former and again and again turn it into a hybrid fictional character.

In the furious solo performance So You Can Feel by the Belgian dancer and performer Pieter Ampe, the body itself and its modes of perception were the focus of the theatrical experiment. Ampe comes dangerously close to us in stereotypical, provocative poses, more or less clothed, finally completely naked and covered in white paint. Exhibitionistic, bold and highly vulnerable, he transforms himself right before our eyes ... animates, so to say, his own body as an artistic material for evoking feelings, and this at full blast. In this approach he resembles perhaps the “theatre engineers” of the Russian group AKHE, which has been represented at the Erlangen festival for many years. In their four-part cycle Between Two, they explore, proceeding from The Tibetan Book of the Dead, states in a space between life and death. As usual, with anarchic, highly energetic and at the same time formally strictly framed excesses of image, sound and material, in which both performers spare themselves as little as they do the audience. A wild, painful celebration of life – and of death. At the other end of the emotional energy scale, there are the rather cool scenic studies of intimate encounters between human and artificial bodies, of human and artificial “intelligence”, in the works of Ulrike Quade (Maniacs) or O-Team (Singularity). Here puppet theatre is hard by the current issue of our digital reality, as are also (in Nuremberg) Meinhardt/Krauss/Feigl, whose Zweite Realität (Second Reality) strikes sparks at the boundary between the technically and the choreographically practicable.

“Classical” forms of puppet theatre were also again impressive when they hyperbolized current problems into the grotesque: for example, Neville Tranter’s Babylon, in which God seeks to keep his gentle, lamblike son from making a Mediterranean crossing in a refugee boat and fails miserably. Or when they dreamily conjure up strange worlds, which are our own, as in the wonderful children’s production Traumkreuzung (Dream Crossing) by the Stuttgart Materialtheater.

And in spite of all digital transformation or performative unsettling, they still assert themselves: the magical moments, evoked by a simple, naked marionette, which, animated by an almost tormenting intensity, seeks before our eyes to escape its destiny and the puppeteer, Renaud Herbin (Strasbourg), acting high above it, and at the end of the close, intimate scene, sinks into a swamp. A parable of futility and of the beauty of resistance that touches our innermost core.

Anke Meyer is the chief editor of “double”, the magazine for puppet, figure and object theatre, and is also a freelance author. In addition to other activities, she teaches at the State Academy of Music and Performing Arts in Stuttgart / Degree Programme in Puppet Theatre. She is also a freelance dramaturge and curator in the area of theatre / short film.