Theatre and Immersion
“You enter Yourself into this Space” 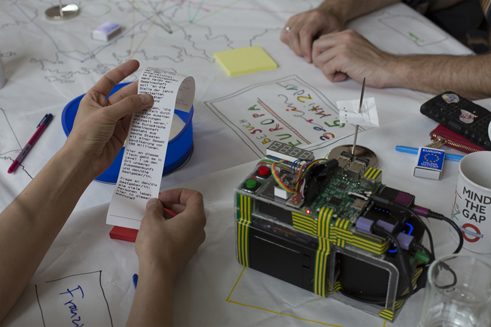 Immersion means experiencing. What does this mean for the theatre? Thomas Oberender, Artistic Director of the Berliner Festspiele, talks about his programme focus “Immersion”.

Mr Oberender, the Berliner Festspiele has a new, multi-year programme focus: “immersion”. What’s behind it?

I hit upon the idea three years ago at an International Literature Festival workshop about the transfer of the material of novels to computer games. “Immersion” refers to an aesthetic principle that aims at the production of a particular form of immediacy, so to say at plunging into the subject instead of adopting an attitude of detached observation.

A proven artistic strategy, isn’t it?

Yes and no. Theatre has always been around, but today it looks quite different from fifty years ago. And the immersive effect today is indebted to very central, new digital technologies, which don’t themselves have to appear at all, yet have already changed our perceptual behaviour and our hunger for experience profoundly. The panorama pictures of the nineteenth century are analogue precursors of this. But what the new technological development is changing at the moment is that you don’t connect this immersive element to the situation of an overview any more, but experience it as someone thrown into it, into the thick of it, and at least as much in the quality of the perpetrator as that of the witness. In contrast with the peephole stage, in virtual space you don’t look at the things, but enter yourself into this space. 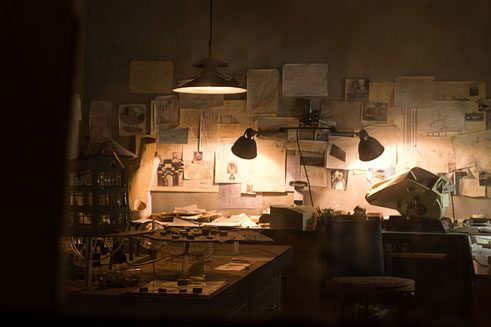 No, the digital revolution has also brought forth forms of art in the analogue area that are designed for immersion. Mona el Gammal’s Rhizomat, for example, is a narrative space: a theatre play in which no actors appear, but in which the viewer wanders alone, a bit like a Tatort inspector, through a cosmos that he must himself open up by reading clues. The deeper he enters into the story, the clearer it becomes that he has landed in the future, in 2060, when the world is ruled by a totalitarian polling institute, which also controls him as a visitor to the installation – and of which the work makes him aware. Another example, outside our programme, is Hausbesuch Europa (Home Call Europe) by Rimini Protokoll.

... an evening on which the “viewers” meet in a private apartment to talk about questions on Europe that are spit out by a small apparatus.

The ingredients of the piece fit into an Aldi bag – a few pieces of bakeware, crayons and a random generator. But the real play is the social situation itself, which arises from a few game rules, the previously mentioned props and the host’s four walls: here we are immersed in the world of other people and the behaviour of a group that doesn’t view or consume the play but rather, through their responses and action, create it in the first place. The performance is practically us; we have only the fun we make for ourselves. This is in a way like IKEA. 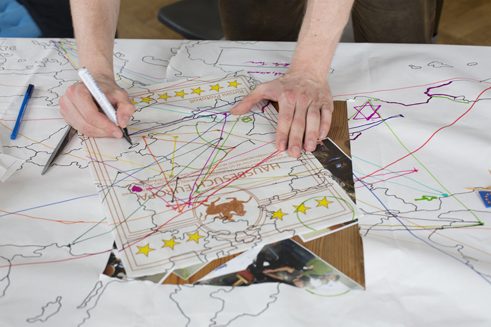 „Hausbesuch Europa“ (Home Call Europe) by Rimini Protokoll | © Pigi Psimenou Do you have an explanation for the boom in the immersive?

I believe we’re living in a state of upheaval. Immersion isn’t a purely aesthetic phenomenon. It’s the guiding idea of an epoch that is bringing forth new forms of economy and different political models and setting our institutions before new challenges. This applies to schools as to museums and theatre. Affects, feedbacks, bubbles – these are new operating modes of the mind and of power, which are first contoured and ruminated in the arts. Parallel to this, Uber, Airbnb and Facebook are changing the world. These developments aren’t something that can be met by the know-it-all Brechtian cigar on the lips.

Your programme is therefore to reflect an overall societal shift of perception?

At any rate, it’s that what we’re interested in. Specifically, the programme is above all a decision in favour of certain artists for whose productions we make more resources available than is possible in repertory or the festival system. In this way immersive worlds arise, each of which proves to be right in its own way. Many people more and more feel the know-it-allness of someone who talks condescendingly and inaccessibly to the audience as if it weren’t there is objectionable. Or it’s no longer enough for them. Against this background, I’m of course very interested in how artists on the one hand take institutions to their limit, but also on the other hand create quite different experiences for the audience.

Situations in which the viewers themselves become the actors?

Immersion isn’t a classical means of participatory theatre in the sense of compulsory co-performance, but rather first simply dissolves the border between “us” and “them”. It tolerates nothing standing over against it – which can be intoxicating, but also has its dangerous sides.

Because when you become part of the work you necessarily surrender a critical distance?

Art has always sought to overwhelm. But good works not only transport you into a certain state – that’s what advertising and entertainment does – they also create an awareness of the means. Therefore the critical reflex to say that immersion is conservative because it destroys distance falls somewhat short.

How would you reply to these critics of immersion?

Read more Kafka, more Ken Liu. Look at more movies by Christopher Nolan and exhibitions by Philippe Parreno, or videos by Ed Atkins. There’s no headquarters anymore. Also no Enlightenment. Before, after the premiere, the directors, the gods in black of modernist theatre, appeared in front of the curtain and then went home. Today they sit at hidden screens in hidden control rooms. At every municipal theatre with a peepshow stage I’m “freer” than in immersive theatre forms, which are extreme control landscapes. This doesn’t mean, however, that their bad, but only that in them a state existing in the world is depicted and made a theme of reflection in a different form.

Exactly. The feminist journalist Nonny de la Peña, for example, creates virtual reality environments in which you’re no longer the witness but rather the guest in social situations characterized by violence and injustice. They are authentic cases, and de la Peña firmly believes that we can gain certain insights only when we also feel them. She always designs the means or forms that lead to these experience, by the way, in a very “epic” manner: you don’t forget that this is all “made”, but it still does something with you.

Christine Wahl is a theatre critic and journalist. She writes for various publications, including the “Berliner Tagesspiegel”, “Theater heute” and “Spiegel Online”. From 2010 until 2013, she was a member of the jury of the Capital Cultural Fund and the Berlin Theatre Meeting. Currently, she is a member of the selection committee of the Mühlheim Theatre Festival.