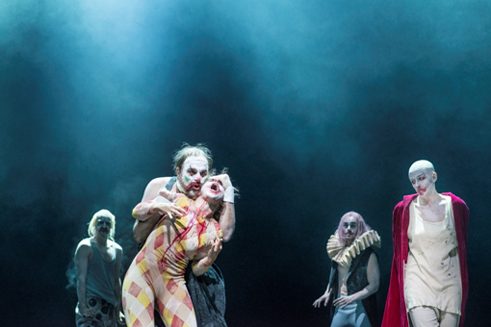 The programmes of the 2017/2018 season are still defined by the theme complex “Migrant Life in Germany”. However, the theatres are also reacting strongly to the increasing number of autocrats who are transforming democratic state structures into presidential dictatorships.

Alongside the customary mixed repertoire with a portion of classical plays and premieres of new dramas, the programmes comprise an abundance of productions on post-migrant life in Germany. Yet the focus is no longer a cursory engagement with the fate of the refugees, but the question: “What comes after the flight?” Responding to this, in most cases, are authors, directors and artists who came to Germany with their families or who were born here.

In spring 2018, the Theater Bonn is presenting an adaptation of Yassin Musharbash’s political thriller Radikal about a society that is being radicalised by Islamist and neo-Nazi elements.
Musharbash’s father emigrated from Jordan, while the grandparents of the German-Turkish journalist and author Fatma Aydemir came to Germany as so-called “guest workers”. Aydemir’s debut novel Ellbogen (Elbow) on an individual post-migrant fate premieres at the start of the season (director: Jan Gehler) in the Düsseldorfer Schauspielhaus.


In addition to these examples of dramatization of novels, there are a number of project-related research works. At Munich’s Kammerspiele the filmmaker Uisenma Borchu explores the migration of her own family in Nachts, als die Sonne für mich schien  (At night, when the sun shone for me), also at the start of the season. Borchu’s parents came from Mongolia to East Berlin shortly before the fall of the Wall in1989. The Jordan-born author Hartmut El Kurdi follows a similar research path when telling the migration story of his widely ramified family in Home.Run in a co-production of the Staatstheater Hannover and the free Theater Agentur für Weltverbesserung (Theatre Agency for World Improvement).

The Theater Osnabrück takes a rather different approach and reflects migration fates via an antique myth. In Medea2 a black and a white Medea come across reflections of themselves, one in Mozambique, the other in Germany. The co-production with the Teatro Avenida Mosambik uses texts from Mozambican and German authors. In Weimar Friedrich Schiller provided inspiration as Robert Schuster and Julie Paucker together with French, Afghan, German and Israeli actors developed Malalei – Die afghanische Jungfrau von Orléans (Malalai – the Afghan Joan of Arc) at the beginning of the season. And for Chris Dercon’s new start as director of the Berliner Volksbühne there is also an antique project based on Euripides’ Iphigenia. In charge of this are the Syrian author Mohammed Al Attar and the Syrian theatre director Omar Abusaada, who are preparing the evening together with migrants from Syria.

The Life of the Prophet

By consistently engaging artists from very diverse countries of origin, the theatre consolidates the phenomena of global migration and post-migrant consequences in certain theatre evenings. This also applies in the case of new theatre texts, many of which are currently being written by the Broadway author and Pulitzer Prize winner Ayad Akhtar. In his piece The Who and the What, the world of a devout Pakistani taxi-driver, who has emigrated to the West, spins into confusion. The reason: his daughter writes a book about the true, passion-embracing life of the Prophet. Afzals Tochter (Afzal’s Daughter), the German title of the play, is at present the most performed work by a foreign author in German-speaking regions and will be played again, inter alia, at the Karlsruher Staatstheater (director: Robert Teufel). The Schauspiel Köln in Cologne will present a piece by the Italian author Stefano Massini as a German premiere (director: Moritz Sostmann). In Occident Express a woman flees together with her granddaughter from Mossul in Iraq along the Balkan route to Germany.

That the theatres react as quickly as possible to the collateral damage of globalisation also becomes clear when one looks at the phenomenon of the growing number of autocrats who are trying to transform democratically–oriented state structures into presidential dictatorships. One thinks of Poland, Hungary, Russia and Turkey, where heads of state are attempting to manipulate the constitutions of their countries. The play of the moment is Albert Camus’ Caligula. In Darmstadt it was performed at the start of the season (director: Christoph Mehler), Oliver Reese is beginning his new directorship at the Berliner Ensemble with a production by Antú Romero Nunes. In November 2017 it will be performed at the Bochumer Prinzregenttheater (director: Clara Nielebock), and in March 2018 it is the turn of the Düsseldorfer Schauspielhaus (director: Sebastian Baumgarten).

Another play of the moment is George Orwell’s classic 1984. An adaptation of the novel is being presented at Mannheim’s Nationaltheater (director: Georg Schmidtleitner), and in Stuttgart theatre-director Armin Petras takes his leave at the end of the season with this parable of a completely monitored, totalitarian state. In Bochum Olaf Kröck celebrates his new start as the director of the Schauspielhaus with an adaptation of Yevgeny Samyatin’s We (director: Christoph Kalkowski). The novel from 1920 served Orwell as a model for his swansong of the future viability of democratic state structures.

There are many more projects engaging with this theme: for example, in Frankfurt’s Künstlerhaus Mousonturm and Hamburg’s Thalia Theater, both of which are staging manifestos of artistic resistance by members of the activist art collective Pussy Riot. Maria Alyokhina’s Riot Days was performed In Frankfurt, while Nadezhda Tolokonnikova’s Instructions for a Revolution will premiere in Hamburg. Showing resistance on the highest artistic level is once again Elfriede Jelinek who takes on Donald Trump in Am Königsweg (The Royal Road: The Burgher King). The premiere is at the end of October in the Hamburger Schauspielhaus, directed by Falk Richter. The text will later be performed at the ETA Hoffmann Theater, Bamberg (director: Daniel Kunze), at the Frankfurter Schauspiel (director: Miloš Lolić) and at the Deutsches Theater Berlin (director: Stephan Kimmig).

Jürgen Berger is a freelance theatre and literary critic for the "Süddeutsche Zeitung", Berlin "Tageszeitung", "Theater heute” and "Spiegel online”. He is a member of the Selection Committee of the Mülheim Dramatist Prize and a jury member for the Osnabrück Dramatist Prize.