Niklas Luhmann
Society without a Center

Niklas Luhmann (1927-1998) is undoubtedly rightly regarded as one of the most important sociologists of his time – not only in Germany. His systems theory, developed over decades, presents one of the few truly comprehensive social-theoretical analyses of modern society. His approach is nevertheless still highly controversial – and this has to do not least with his view of the political sphere, which breaks radically with traditional interpretations and widespread normative expectations. Luhmann’s work is in sum a critical enlightenment about the limits of politics. 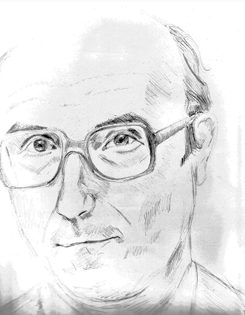 Niklas Luhman | © Lorenz Vierecke Social systems consist in and reproduce themselves through communication. This applies to interactions (communication among people present), to organizations (which are based on membership) and to the social system as the “comprehensive social system”. Communication assumes of course participating systems of consciousness (human beings), but is separate from them in its mode of operation. To understand the self-constitution and reproduction of social systems, we must decipher their functional logic, not the motives or actions of individual actors.

Modern society is largely differentiated into mutually independent subsystems. Luhmann’s regards functional differentiation into subsystems, each with its own rationality, as the universal structural principle of modern society. These subsystems (economy, politics, law, religion, etc.) mark themselves off from the social environment in their communications; they emerge and reproduce themselves through operational closure (“autopoiesis”). Every social subsystem has its own code, its own medium, its own language. The economy, for example, functions according to its economic principles: communication occurs through the medium of money, based on the distinction payment/non-payment. This functional logic is quite different from that, say, of the system of knowledge, which is based on the distinction between true and false. The economic system, like all other systems, obeys its coding and constantly reproduces itself in accordance with it. “It goes on and on, beyond all goals, all profits, all satisfaction.” A political or moral re-programming or re-orientation on the basis of overarching criteria is not possible: to force the economic system to adhere to non-economic criteria would be, at best, counterproductive.

This means two things: first, there is no longer a meta-system or center of society (as “politics” was seen to be for long time) located above the subsystems and controlling them; and second, there are (as already suggested) no active actors that are in a position to break through the established forms of systemic communication. With both these theses, Luhmann contradicts widespread ideas – for example, that society has a commitment to certain values or that it requires a comprehensive consensus. On the contrary, according to Luhmann, subsystems function without a legitimating consensus of citizens, without the idea of a common morality or a democratic ethos felt to be held in common by citizens. The life-world and the world of systems are separate from one another. In today’s “world society”, “the gulf between interaction and society […] has become unbridgeably wide and deep […]. Although society largely consists of interactions, it has become inaccessible to interaction. […] Consequently, there is no longer any ‘good society’.”

Turn away from “old European” humanism

Luhmann bids farewell to a long European tradition of reflection on the relationship between man and the social order. This tradition often saw the relationship as a symbiotic one: the political community was regarded as the scene of man’s substantial integration into the whole and the realization of his nature (as a political being). For Luhmann, functionally differentiated societies can no longer be conceived as such communities: “The point of difference is this, that for the humanist tradition man stood within and not outside the social order.” But man is part of the social environment. He is “no longer the measure of society”. The old unity of the good life and the political order has been ruptured. Systemic and social integration come apart: “In place of one mechanism there are now two; and that means that social integration, which is now released from its duties of remote control, can take on its own atmosphere. With modern expectations of friendship, love, intimacy and sympathy, social integration assumes a different, more intense coloring; but precisely for this reason it would be foolish to expect it to address society as a whole […], as if social integration could still imply systemic integration.”

Against this background, sociological explanation must consist, not least, in dismantling illusions attached to certain normative self-descriptions of modernity. In particular, it must say good-bye to “the association of the concept of modernity with the mind-set of the rationalist Enlightment” and “the importance that it ascribes to the self-determining individual”. This is one of Luhmann’s central points of dispute with Jürgen Habermas.

The politics of society

With these reflections on the structural principles of modern society, Luhmann means to correct a number of traditional assumptions about politics, its significance and its scope. What then is politics, and what does it contribute as one social subsystem alongside others? Politics has the “capacity for collectively binding decision-making”. Its medium is power. Contact to other subsystems arises through “structural coupling”; for example, the political system is coupled with the legal system through the institution of the constitution. But politics cannot control the autopoiesis of the other subsystems. This accordingly requires above all a correction of the traditional and still widespread understanding of the state: the state does not stand above society and is not its center or its control center. The state is merely one organizational form of the political sphere, one part of the political system.

Politics and the state thus have a far more modest scope of influence than the public, especially in democratic systems, suppose. In the manner of a sober realist, Luhmann comments laconically on the motives that drive many citizens into disaffection with politics: “Reflection on these general conditions could lead to a positive assessment of the capacity for unprincipled maneuvering, for preventing the worst in each case, for a reactive rather than a cognitive-rational use of tactics. Such an assessment is at any rate ‘up-to-date’.”