Given the nature of current research topics, should university teaching be focused more on specialisation or universal learning? | Photo (detail): © picture alliance/Waltraud Grubitzsch

Alexander von Humboldt is often described as one of the last universal scholars. Not just a celebrated natural scientist, he also had an extensive knowledge of anthropology, history and geology. Such polymathic expertise was not rare in the 17th and 18th centuries. The philosopher Gottfried Wilhelm Leibniz was well‑versed in mathematics and law, the physicist Isaac Newton was also a philosopher and theologian. The classical breed of universal scholar died out a long time ago; polymathy cannot deliver the highly specialised knowledge needed in academic disciplines today. But that does not mean the days of universal research are over. Indeed, Leibniz Association President Matthias Kleiner believes the opposite is the case. He sees interdisciplinary cooperation as the answer to the often complex challenges of our time.

Dr. Kleiner, it is often said of scientists that they know more and more about less and less. Has the kind of universal education associated with Leibniz and Humboldt disappeared from the German education system?

Yes and no. There is deep specialisation and delineation but also broad interdisciplinary cooperation. Science is wide-ranging. It affects every aspect of our life and provides answers to complex questions for the future. So it is important that scientists do not just immerse themselves in their own discipline and cut themselves off from others. But we must not forget that interdisciplinary excellence requires disciplinary competence.

So researchers need to be specialists but a universal approach can be adopted through interdisciplinary cooperation. Is that what the Leibniz Association promotes? 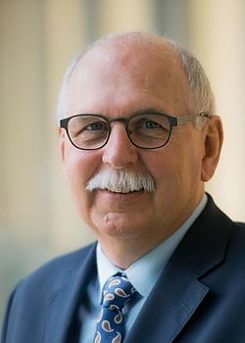 Matthias Kleiner spent years at the helm of the German Research Foundation (DFG). Since 2014, the graduate engineer has been president of the Leibniz Association. | Photo: © Leibniz-Gemeinschaft/Oliver Lang It is a precept fundamental to the Leibniz Association's work. 20,000 people at 95 research institutes, research infrastructures and research museums work to push forward the boundaries of human knowledge. Each institute has its own mission, which is itself interdisciplinary. Climate change, for instance, is studied by the Potsdam Institute for Climate Impact Research across various natural and social science disciplines. But there are topics that cannot be addressed by one institute alone, so competence and culture need to be developed for interdisciplinary cooperation.

Have universities and other research institutes got that message?

I cannot say if they have all got it. But awareness of the need for cooperation is growing. We see that, for example, at the Collaborative Research Centres of the German Research Foundation.  Demand for funding has been at an excellent level for many years. And rightly so, because the interfaces between disciplines are where innovations are developed.

One could argue along those lines because research topics have become much broader. There are lots of examples: from climate change to conflict and peace research, food security to epidemics. Issues that affect us all need to be addressed and resolved on a broader front. We have a Leibniz Research Alliance on "Healthy Ageing", for instance, which looks at how we can make people happier and healthier in later years. The research ranges from cell ageing to pension systems, to the question of how older people can enjoy a good life in the urban environment. This is a universal approach to research that is becoming increasingly commonplace – from biodiversity science to marine research.

Where does Germany stand in this regard compared with other countries?

Science in Germany need not fear comparison, the conditions here are excellent. We have a high-calibre scientific community distributed fairly evenly across the country. We may not have leading-edge star institutions like the US but the standard of research across the board is very high. We need to build on that because Asia – China in particular – is fast making up ground. We can still hold our own but we need to think more in European terms and take advantage of the distinctive mix of competition and cooperation. That is a strength. Incidentally, young people from Germany are in demand worldwide – which says something for the outstanding quality of our education.

To what extent is student specialisation driven by economic constraints in teaching and research and labour market incentives?

I think some corrections need to be made in teaching in the wake of the Bologna reform. When bachelor and master courses were introduced, lots of new programmes were developed – some of them very specialised. We need to consider whether it might not be better if courses were more broadly based in the first phase, with specialisation confined largely to master's programmes. Doctoral and post-doctoral phases are a different matter. Only twenty percent of the most highly qualified students stay in academia, and only a fraction of those become professors. Eighty percent go into the private or social sector and we need to prepare young people better for that.