For the first time in 25 years the German Architecture Museum (DAM) in Frankfurt will again be representing Germany at the Venice Architecture Biennale 2016. This time its director Peter Cachola Schmal is addressing a hotly debated theme.

Mr. Schmal, what made you choose the theme “Making Heimat, Germany Arrival Country“?

It was a highly topical issue, and I was most impressed by a book I had read Arrival City by the Canadian author Doug Saunders. When I was asked to join the jury again as deputy chairman I pondered on the idea of making my own contribution. The DAM then submitted a presentation in July 2015 addressing the topic of immigration – with Oliver Elser as curator and Anna Scheuermann as project coordinator. The question we are dealing with is: what conditions will make immigration easier?

So you were less concerned with the migrant and refugee issue?

The last jury meeting was held in October 2015, just when the refugee debate was flaring up. We have always said that our topic concerns immigration. The arrival and settlement of new refugees and migrants will naturally lead to new immigrants. But the more important question is not how to deal with migrants and refugees on a temporary basis, but whether Germany is a country of immigration or not, and what new structures are required to accommodate this development. 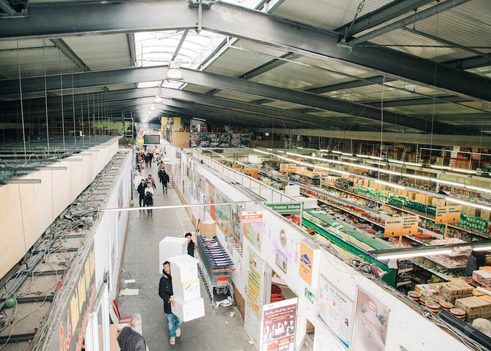 Don Xuan Center, Berlin | Photo: © Kiên Hoàng Lê Doug Saunders is the specialist in this field. He has been addressing this subject on a global scale for 15 years, and his reports tell us what these arrival neighbourhoods are like and what is so special about them. Immigration is one of the key issues in the Western world, and one we should start trying to solve. If ignored, it is going to have negative consequences.

Our opinion is that Germany has long been a country of immigration, we just haven’t publically announced this yet. We don’t even have an immigration law or a ministry for immigration issues.

Are you also dealing with migrant and refugee housing?

This is an architecture biennale, so we will naturally have to answer questions on building activities that are currently going on in Germany. Apart from us, there is no one else in the world building migrant housing on such a large scale, with the exception of the huge temporary camps near the conflict areas. There is a lot of building going on in Germany, with projects ranging from large collective centres to small housing units. However, these settlements for migrants and refugees are being built at great speed, with a great deal of good will, a lot of money and sometimes, perhaps, slightly too hasty decisions …

Apartments for refugees and homeless persons, Ostfildern, u3ba Arge camilo hernandez urban 3 + Harald Baumann baumannarchitects, Stuttgart | Photo: © Markus Guhl We have therefore launched a call for migrant housing projects, and will be presenting a database online in German and in English. This will show which projects already exist, what they cost, where they are placed in the urban fabric, the building material used and the size of the projects – all this is done without judging them. It is important for town mayors or district administrators to see the cost per person and per square metre, the people involved in the work and how long the project took to build. This will provide transparency.

So on the one hand you are offering a concrete idea pool with facts and comparable figures, presented in a database, and on the other hand you want to address the raised question: What is Heimat, how can it develop and what contributions can architecture make towards this development? Is this what you will be focusing on at the Biennale? 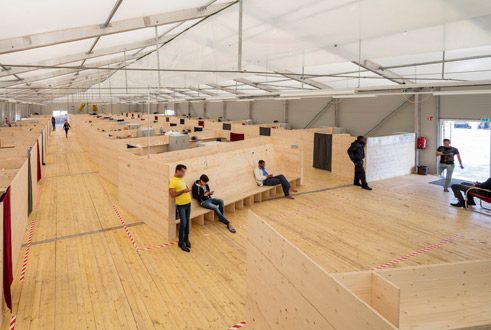 Crash programm light weight construction halls, Munich, Jan Schabert (günther & schabert Architekten) | Photo: © Michael Heinrich Yes it is. But because these housing projects for migrants are so important they are already being published prior to the Biennale. They are not the key topic of our presentation and this information is needed now. We see this as a service. The market lacks transparency and there are plenty of players who earn a lot of money with migrant facilities.

After being inspired by Doug Saunders’ analyses what were you able to transfer to Germany?

The key urban planning issue in Germany is our housing problem. The migrant topic is making this situation even worse. In a few years time, people will comment on the large number of immigrants and ask where they are going to live. There will then be a battle for homes on one housing market with all the other less well off. Such a situation is not going to make the integration of immigrants popular. 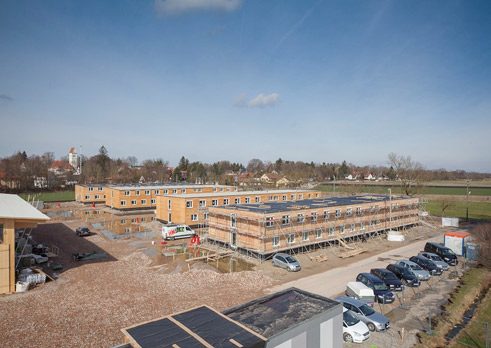 Do you see opportunities arising from a worsening situation?

Pressure on the population is going to increase and politicians will have to make decisions. It is not acceptable having inner cities like London, Paris or New York where only the wealthy live and also feel unsafe. These cities are destroying their own basis of existence. Cities are places where different groups of people mix, thus enabling an incredible amount of creative energy to be released. We see a lot of challenges ahead and cities are going to have to face these challenges.

Let’s get back to the word Heimat: what are you trying to explain here?

Heimat is a wonderful expression. It cannot be translated. Nevertheless, people abroad do understand the meaning of this German word. Heimat stands for so many things. The expression Neue Heimat, or new Heimat, was once associated with a political scandal, so we have taken the expression Making Heimat instead. This means a proactive commitment to making a Heimat for new people arriving. These people have had to leave their old homeland, under whatever circumstances, and want to settle down in the new country.

Residential building und community center, Hünfeld, trapp wagner Architekten und Ingenieure, Hünfeld | Photo: © Dr. Michael Fladung We should be happy and proud that we are de facto a nation with a high proportion of immigrants. But we also need to offer support to these people who are seeking a new Heimat in Germany. It is going to take some time before we actually become a true open society for immigration. This will not be the case until immigrants have become fully accepted at all levels of society and when, for instance, the head of a medium-sized engineering company is a person with an Indian or Arabic surname. Then we really will be a country of immigration. There’s a lot of work to do until then …

Peter Cachola Schmal is an architect, curator and publicist in Frankfurt. He is half German, half Philippine. He has been head of the DAM in Frankfurt since 2006. In 2007 he was general commissioner for the German contribution at the VII International Architecture Biennale in São Paulo.

Regina Prinz hold this conversation. She is a free lance editor and author in Munich.