“Free speech” is not free. It can have serious, even deadly consequences. When a Californian recently uploaded a primitive YouTube video depicting Mohammed engaging in oral sex, it sparked violence and riots throughout the Muslim world.

“Free speech” is not free. It can have serious, even deadly consequences. When a Californian recently uploaded a primitive YouTube video depicting Mohammed engaging in oral sex, it sparked violence and riots throughout the Muslim world. When a Danish newspaper in 2005 published several cartoons lampooning Mohammed, violent protests erupted around the world, leading to an estimated one hundred deaths. And according to Malise Ruthven in his recent post on the NYRblog, “Can Islam Be Criticized?”, at least sixty people are believed to have been killed in the 1988-1989 riots in Pakistan and India prompted by Salman Rushdie’s The Satanic Verses, which satirized Mohammed and depicted his wives as prostitutes. 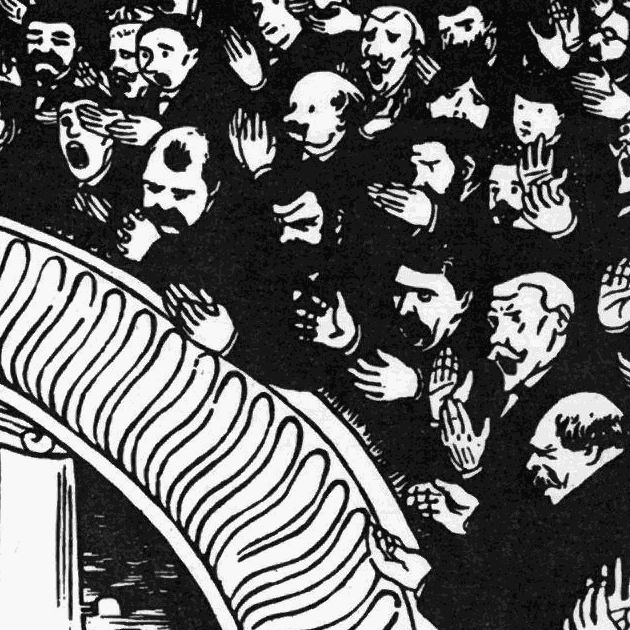 Woodcut: Félix Vallotton © Goethe-Institut In the United States, the First Amendment demands tolerance for the intolerant, for speech that insults, offends, derides, and blasphemes. In the age of the Internet, however, the consequences of the speech we protect easily transcend borders. A hateful bigot in California or preacher in Florida can, almost without cost, garner international attention, and provoke international violence. Many other democracies have determined that the cost of “hate speech” is not worth the candle. Australia, Belgium, Canada, Denmark, France, Germany, South Africa, Sweden, and the United Kingdom, among many others, prohibit some forms of “hate speech”—although every country defines the term differently.

Malise Ruthven calls for a “two-pronged strategy” in which scholarly criticism of Islam would be protected, but “‘insulting’ the Prophet with the intent of stirring up hatred might be categorized as a form of ‘hate speech’ comparable to anti-Semitism, racism, flag desecration, or Holocaust denial” and prohibited. Jeremy Waldron, a regular New York Review contributor, has also [defended]((http://www.nybooks.com/articles/archives/2008/may/29/freespeech-the-menace-of-hysteria/) prohibitions on hate speech, both in the Review and in a new book, The Harm of Hate Speech, reviewed recently by Justice John Paul Stevens.

And colleges and universities across the country have adopted speech codes that prohibit, in one form or another, hate speech on campus. Adopting arguments of legal scholars such as Mari Matsuda, Charles Lawrence, and Thomas Grey, these institutions have determined that hateful speech, when unchecked, may silence and exclude minority voices, and therefore should be banned or regulated. In public institutions governed by the First Amendment, these codes have generally been struck down by the courts. But in private institutions, they are immune from formal First Amendment challenge (although not from arguments about the importance of preserving freedom of expression in an academic setting).

Such proposals to regulate hate speech—whether “two-pronged” or not—are flawed, for principled, legal reasons, as well as strategic, political considerations. As a legal matter, any attempt to penalize speech because of its offensive content contravenes the First Amendment’s bedrock principle that the government should not be in the business of defining what messages are permissible or impermissible. Arguments for regulating hate speech often take the same form as those made by defenders of laws prohibiting flag burning: if the content of the expression is offensive, and the speech itself is deemed of negligible value, it should be suppressed. But the last thing we need in a democracy is the government—or the majority—defining what is or is not a permissible message.

Second, defining “hate speech” in a way that draws a clear and enforceable line between that which deserves protection and that which can be prohibited is an elusive, and probably impossible, task. Ruthven’s proposal distinguishes between criticism and “insult,” an approach eerily reminiscent of the one Turkey’s Prime Minister Tayyip Erdoğan has adopted in defending the prosecution of journalists for “insulting” Turkey. Waldron’s proposal draws similarly vague lines between speech that offends, which he would protect, and speech that denigrates the human dignity of individuals or groups, which he would not. Canada prohibits “any writing, sign or visible representation” that “incites hatred against any identifiable group.” Ireland prohibits “blasphemous” speech that is “grossly abusive or insulting in relation to matters held sacred by any religion.” Such laws empower the government, or a jury, to draw lines between legitimate criticism, satire, and public comment on the one hand, and “insulting,” “abusive,” or “hateful” speech on the other. Is there any reason to be confident that government officials or juries will do a good job of this? And as long as the lines are so murky, many people will be compelled to steer clear of legitimate expression that some official or jury might, from its own viewpoint, deem over the line after the fact: this would stifle free speech and lead to self-censorship. Ruthven himself seems ambivalent about whether Rushdie’s depiction of Mohammed in The Satanic Verses is “insulting,” and therefore should be prohibited, or an example of artistic criticism that should be protected.

In theory, these laws are designed to protect minority groups and religions. But in a democracy, enforcement will inevitably be driven by the concerns of the majority, and is almost certain to be targeted at marginal dissidents and outliers. George Washington University law professor Jonathan Turley recently compiled a list of examples of ill-advised enforcement of such laws. Canada penalized a comedian for violating a lesbian couple’s human rights during an open-mic comedy routine. The UK arrested a fifteen-year-old girl for burning a Koran. France fined Brigitte Bardot for criticizing Islamic influence on French culture. The Netherlands and Italy have charged cartoonists and comedians with insulting religion.

As a strategic matter, if the concern driving such laws is the protection of minority rights, empowering the government to suppress speech it deems “offensive,” “abusive,” or “insulting” hardly seems wise. Minority groups have historically won legal rights through the kind of public organizing, advocacy, and expression that the robust protection of free speech guarantees—even when the majority would rather they were silenced. For the civil rights movement, the women’s rights movement, and the gay rights movement, the path to equality has been paved by the vigorous use of free speech, not by suppression and censorship of racist, sexist, or homophobic comments.

Finally, if the goal is to promote peaceable coexistence among human beings enjoying equal dignity and respect, isn’t allowing everyone his or her say a reflection of that respect? And isn’t it possible that by tolerating the intolerant, we teach tolerance in the most dramatic and fundamental way? In the United States, a strong First Amendment tradition means that people are free to, and often do, say plenty of outrageous, stupid, malevolent, and hateful things. Just listen to radio talk shows. But what we don’t see in response are riots and violence. The constitutional principle that demands freedom for speech that is offensive may in turn teach and reinforce the tolerance that is at bottom, essential to a functioning diverse society and world.

To be sure, the ease with which vitriol and hatred can be transmitted internationally over the Internet complicates matters. When irresponsible individuals in one part of the world engage in speech that is intended and likely to provoke violent unrest in other parts of the world, innocent people in other countries may pay for our free speech. But if we were to start prohibiting speech on the ground that some listeners, somewhere in the world, might be offended and react violently to it, we would be enforcing the worst kind of international “heckler’s veto,” and sanctioning the violence, which is surely more reprehensible than the speech itself.

There is a place for limits. I am a professor. I do not tolerate, in my classroom, disrespectful speech of any kind, because it interferes with the learning environment that I seek to foster. I am also a father, and have a similar view with respect to the need for respectful speech around the dinner table. A responsible newspaper publisher might well decline to print an article that its editors were convinced was likely to spark violence. But these limits are not imposed by law, but by social norms and ethics, which are in turn informed by discussion, dialogue, and culture. Such norms are quite powerful, and ensure that for the most part, people do not use their freedom of speech irresponsibly. In those isolated instances where freedom is exercised irresponsibly, it is far better to employ more speech to condemn it—as President Barack Obama did recently in response to the YouTube video—than to empower the state to limit speech by punishing dissidents deemed hateful or insulting.