Pupils all over Uruguay have recently been able to learn German – even in remote villages. Teaching is done digitally – from the capital Montevideo.

When Ignacio Dolio in Montevideo drives to work on his scooter, he needs just a couple of minutes – although this place of work is actually more than 300 km away, at the Liceo 3 school in Fray Bentos. Ignacio connects digitally from the Liceo 34 school in Montevideo to the other school located far away in the hinterlands of the country. He teaches German there – digitally: In Fray Bentos his lessons are broadcast on a large screen in the classroom. “I also have a screen here; I log in with my microphone and laptop and can already see my pupils in front of me.” And they see and hear their teacher as well of course.

Ignacio Dolio is one of the teachers who has been teaching German throughout the entire country this year, in partnership with the Goethe-Institut – via tele-broadcast and supplementary to the normal timetable. Uruguay has deployed digital school tuition for several years already and the Goethe-Institut is using this structure for a pilot project to offer German tuition in partnership with the Ministry of Education. The Goethe-Institut also trains local teachers to teach the language. The project has been financed by the German language education campaign of the German Foreign Office in Berlin.

Angelina Ramírez, a pupil in Ignacio’s class at the Liceo 3 in Fray Bentos, is delighted about this. She can already speak English but wants to learn another language. “Fortunately Ignacio explains everything so clearly that it’s easy for us to understand,” says the 15-year-old. She admits that she was a little sceptical at first. She thought German would be too difficult. “But my father said I should just try it.” And now she doesn’t want to stop: “It’s really fun! And it’s a unique opportunity for me to get qualified for other jobs in the future.”

Equal opportunities in the education system

“We don’t have teachers who can teach [the language] in all areas of the country,” explains Aldo Rodríguez, head of the national language policy. That’s why the Plan Ceibal was introduced in Uruguay in 2007: to create equal opportunities for everyone in the education system using digital access routes. “All the pupils in the country are given, among other things, laptops,” Rodriguez explains (one-laptop-per-child). A digital platform including video conference software is also made available, which allows tuition to take place in the remotest regions of Uruguay. Using exactly this equipment, the Ministry has offered German for the first time to eight schools throughout the country since May 2021. 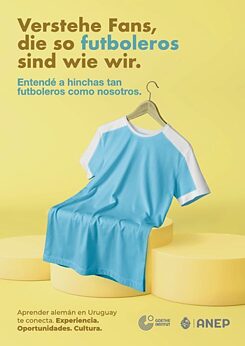 Flyer of the advertising campaign | © Goethe-Institut e. V. “This partnership fits perfectly into our programme Uruguay Plurilingüe 2030,” confirms Rodríguez. The programme dictates that all pupils first learn English, then a regional language (usually Portuguese), and finally yet another foreign language. After all, German is the language of many immigrants to Uruguay and should continue to be spoken here. Learning a foreign language is a vital element in the development of young people: “It helps us to cross borders and makes our citizens more open-minded.”

Aldo Rodríguez is delighted that the partnership helps to support the training of German teachers in the state education system. As well as Ignacio, three further teachers are currently being trained by the Goethe-Institut. In further education courses specially tailored to the requirements of the country, they learn how to teach the fundamentals of the language to beginners – and to ensure that they have fun at the same time.

For 20-year-old Ignacio Dolio, it’s a dream come true. He originally wanted to become an engineer – until he visited Berlin in 2020: “It was then that I realised how language can open up the world to you, and that I wanted to communicate this to others.” Instead of studying engineering, he is now training to be a teacher at the teacher training institute in Uruguay. The qualification at the Goethe-Institut is a supplementary module for him: “I would like to learn as many languages as possible, so that I am able to speak with as many different people as possible.”

The distance is not a problem

Ignacio loves teaching – even if it takes place digitally and from a great distance. “My pupils are in a room without a teacher; I’m in a room without pupils. It’s like ‘Lessons with no-one’,” he says. The technology and the distance are not a problem. “The pupils are young and the Internet is part of their lives.” And teaching remotely does have its advantages, he grins. For a start, he doesn’t need to wear a mask.

Verónica Corujo is also delighted. She is the director of the language learning centre in Trinidad, a small town with 25,000 residents north of Montevideo. We always wanted to offer German but we didn’t have any teachers.” Now homemade posters with “Herzlich Willkommen” lettering decorate the walls in the classroom, which is full of pupils eager to learn. It’s not just that knowing German helps in communicating with German tourists. “Learning languages creates opportunities for the future and opens up other cultures,” says this dedicated director. From the moment she created a WhatsApp group for the parents, the German course filled up quickly. “Yet another mother rang me yesterday, to ask if she could still register her child.”

In Fray Bentos, a few horses graze next to the school fence. Meanwhile Angelina Ramírez is dreaming of snow in Germany. She definitely want’s to experience snow soon – to make an “Angelito”: a snow angel. “And I really hope that we will be able to continue next year with the lessons!”