Which German? Standardization
German and its Norms 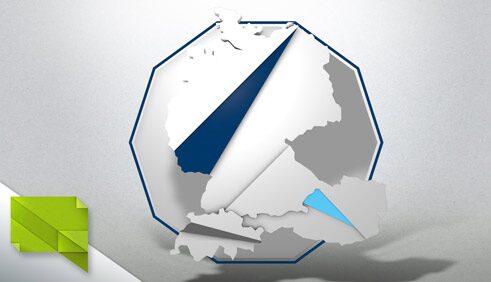 German as a standard language evolved historically as a lingua franca umbrella spanning a continuum of dialects. In the process, its orthography, vocabulary and grammar were standardized, as were its status and the contexts in which it was used. German today is considered to be a “pluricentric” language with a number of regional and national norms, though as a rule they differ statistically rather than categorically.

The term standardization is used when a lingua franca or standard language serving as an umbrella spanning a continuum of dialects evolves. The subject of this process of standardization is not only the language itself, as regards for example its orthographical forms (“corpus planning”), but also its public status, for instance as an official language or as the language used in schools (“status planning”).

In the case of German, this process lasted several centuries. In the fifteenth and sixteenth centuries, the language began to be standardized across various regions on the basis of the East Central German and East Upper German variants. Next the written language was expanded and standardized by Weimar Classicism. One can talk of a “standard German language” from the nineteenth century.

WHO DEFINES THE GERMAN STANDARD?

Unlike in France, the standard language in the area in which German is spoken is not governed by a legitimized body. Although regulatory authorities do exist, such as the Standing Conference of the Ministers of Education and Cultural Affairs of the Länder in the Federal Republic of Germany, the Federal Ministry for Education, Arts and Culture in Austria and the Swiss Conference of Cantonal Ministers of Education in Switzerland, the heated debates about the orthographical reform of 1996 clearly revealed how little power they have to enforce their views in the public sphere and among non-governmental institutions.

Nonetheless, recognized dictionaries do of course exist for standard German, as well as institutions which define the norms. From 1955 to 1996, for instance, the Duden dictionary of orthography in the Federal Republic of Germany was regarded as the authoritative work for official German orthography. Furthermore, there is a preferred pronunciation (known as “stage German”), a constitutionally enshrined status as the official or national language of, for example, Germany, Austria and Switzerland, and an authorized public usage. Then there are service regulations regarding the “official high German” to be used by civil servants and teachers, not to mention a literary canon.

There may be various reasons why a language becomes standardized, a process that can have a variety of consequences. Initially, it is a pragmatic question of people being able to understand one another over wider areas. The Bible translations of Martin Luther and Huldrych Zwingli, together with the success of the printing press, contributed to a process of standardization of the written language throughout the German-speaking world, thereby facilitating the dissemination of reformatory ideas. In nineteenth-century Germany, the fact that German became established as the national language allowed a homogeneous economic area to form.

In addition, language standardization often has an ideological dimension. In the case of German, this initially related to the idea – based on Johann Gottfried Herder – of a “state”, “nation” or “people” being inextricably linked to a particular “language”, a concept that emerged at the same time that dialects were being superseded by standard German. This was reinforced by the ideology of a unified republic that came about at the time of the French Revolution and was directed against both the dialects and the regional languages. In both cases, the standard or “state language” enjoys the status of being the sole “legitimate” variety; when speakers of sociolects, dialects, minority languages or immigrant languages have an insufficient command of this standard language, serious instances of discrimination can be the result, as for example happened in Latvia after the country regained independence in 1991.

THE RISE OF REGIONAL LANGUAGES

In actual fact, the alleged homogeneity of a standard language is in many respects an illusion. Particularly in times of general globalization, regional languages, regional cultures and heritage languages offer individuals a new and secure sense of identity. Accordingly, regional variants of German, such as Low German or Plattdeutsch, are also becoming increasingly important. In much the same way as has long been known to happen in English or Spanish, German nowadays can also be seen to be undergoing processes of what is known as de-standardization: regional and social forms of language use have become more common not only statistically, they can even achieve greater prestige than the (old) standard.

In the case of German, the “pluricentricity” of the language is also accepted by the standardization bodies these days. Distinct orthographical regulations exist for Swiss High German, the variant of standard German commonly used in Switzerland. What is more, this is the language that is used almost without exception in the Swiss media and official texts, as well as in the correspondence of Swiss companies. The Duden dictionary denotes certain terms as “Swiss”. In Austria, on the other hand, the existence of a separate Austrian standard German was the subject of controversy amongst linguists in the 1990s.

DIFFERENT STANDARDS WITHIN THE STANDARD

It is no exaggeration to talk of what is in effect a “re-standardization” of German. This takes the form of both variable orthographical norms (“Spaghetti” versus “Spagetti”; “groß” versus “gross” etc.), and a range of publications encompassing everything from the “Österreichisches Wörterbuch” (i.e. Austrian Dictionary) which first appeared in 1951, Duden publications such as the 2008 “Österreichisches Deutsch” (i.e. Austrian German), the 2009 “Wie sagt man in Österreich? Wörterbuch des österreichischen Deutsch” (i.e. What is that called in Austria? Dictionary of Austrian German) and the 2012 “Schweizerhochdeutsch. Wörterbuch der Standardsprache in der deutschen Schweiz” (i.e. Swiss High German. Dictionary of Standard Language in German-speaking Switzerland), right up to an official brochure issued in 2014 entitled “Österreichisches Deutsch als Unterrichts- und Bildungssprache” (i.e. Austrian German as a Language of Teaching and Education).

All the same, the centre and peripheries of pluricentric languages do not necessarily have to be seen in geographical or national terms. It is true that the differences between the German used in Germany, Austria and Switzerland are often highlighted (though it is only one of four national languages used in Switzerland). However, it is frequently forgotten that significant differences also exist within Germany, for example between the north and the south – as is particularly the fact that the differences are almost exclusively more statistical in nature. Elements which occur outside Austria, albeit less frequently, are regarded as “Austrian”.

Furthermore, de-standardization processes often take place in central conurbations such as big cities as the result of immigration and generational shifts, though normally without the new forms being codified. In sociolinguistic terms, one would talk here of “emergent varieties”, if at all.

The absence of generally binding norms does of course have an impact on teaching. The way standard German is taught as a native tongue or as a second language with an emphasis on regional norms can differ in the various German-speaking regions. This can give rise to conflicts when it comes to German as a foreign language. One subject of controversy for instance is the question of whether Swiss High German or “standard German“ should be taught in French-speaking Switzerland.