Filipino Broadway star Lea Salonga tweeted recently that she lauded the inclusion of an Asian doctor in Grey’s Anatomy. She added, however, that she can't really take any TV hospital show seriously unless there's a cache of Filipino nurses on staff. This rings true, as so many healthcare facilities all over the world have Filipino nurses taking good care of the patients. Germany, with its aging population, is no exception.

Figures from the European Central Bank show that because of declining birth rates, in 2019, there will be fewer Germans under 30 years old than there are Germans that are 60+ years. With a growing number of elderly patients in the country, Germany has had a significant need for hospices and in-home care. This is where the Filipino nurses come in, to fill the gaps and to ensure that older patients are given quality health care.

Lillibeth Pono, Chargé D' Affaires, of the Philippine Embassy in Germany says that a government to government program called the "Triple Win" was instituted to help facilitate the employment of nurses in Germany to address their patient care needs. “We have about 500 nurses here, working in different hospitals both through the Triple Win and the track that allows private institutions in the Philippines to send nurses to private hospitals here in Germany.” She adds that the government and institutions are happy with the service rendered by the Filipino nurses, so there will be more employment openings soon.

Maria Karen G. Viola, a Neurosurgery Nurse at the Neurozentrum in Universitätsklinikum Freiburg, says that she is aware of the lack of nurses in her own facility. “In the hospital where I worked in the Philippines, the ratio is one nurse for 10 patients. It is the same scenario here.” She shares that she is satisfied with her work, despite the initial challenges of the language barrier to which she has adjusted well after 8 months. She finds the workload lighter, especially after coming from a background that involved working in a state-run hospital in the Philippines. “All the supplies are available and when it comes to patients, they don’t have problems when it comes to financing the expenses for hospitalization.”

“They find us respectful, gentle and empathetic.”

Her patients are also very nice, she says. “Once they learn that I come from the Philippines they seem very delighted. It’s very humbling to know that most of my patients have this very good impression of Filipino nurses. And they find Filipino nurses very sweet, respectful, gentle and empathetic.” 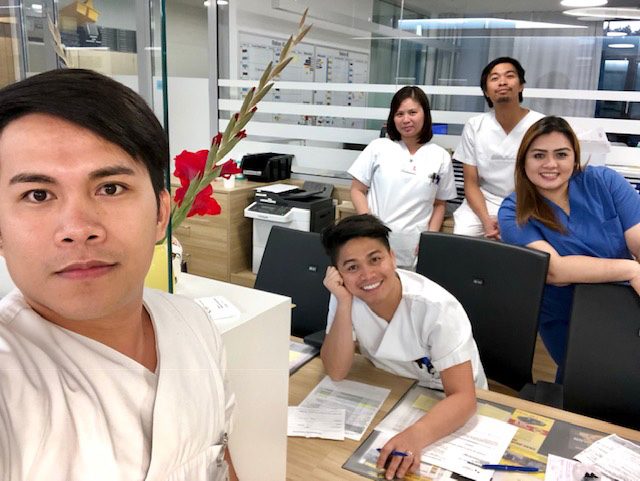 Fortunately, Luther adds, they have fulfilled the responsibilities given them. “It was an accomplishment that our employers were satisfied the way we worked, showing them our so-called TLC (Tender Loving Care). Those struggles and dedications brought me into what I am now – I earned my colleagues’ trust and more importantly that of the patients.” He took the initiative to learn not only the German language but also the dialect in the area where he was assigned, and that endeared him to his patients even more. “At the department I’m working in, we already have frequent patients who are coming every 3 months, they ask if Nurse Luther is still here,” he reports happily.

Deborah Castueras, a nurse at Helios Klinikum München West Intensivstation and Notaufnahme has been working there for a year, and says that she likes her work. “I had to adjust to a few things, such as the language and the equipment that they use but after that, it became much easier. I also like it here because the work is not too heavy, there are days when we get to go home early because the work is done.” She is proud that Filipino nurses are sought after in Germany. “My employer says that they keep on hiring Filipino nurses because we show true care and concern, we treat our patients like family and we are industrious and meticulous in our work.”

Their stories are illustrative of what Filipino nurses offer wherever they work in the world. Aside from having a good job that allows them to support their families back home, these Filipino nurses are helping to nurture and heal the patients not only with their hands and expertise, but also with their hearts on the job.

Jeffrey Hernaez from ABS CBN in Manila was an exchange journalist at Märkische Oderzeitung in Berlin for three weeks. The article “Premium Patient Care: Filipino Nurses and Germany’s Elderly” was published by MOZ.de on December 30th 2018.